Take a seat onboard the BTG Star Cruiser as we embark on an epic journey to Venus that will put Elon Musk to shame! Danger High Voltage 2: The Final Countdown is here!

Last time we heard from Big Time Gaming was in January as Holy Diver was rolling out. With an approval rating of 93%, it became the highest scoring game in the history of Bigwinboard and one of only three online slots to ever receive a score in the 90%+ range. The response from players, however, was mixed and not nearly as positive. Initially, much praise was given to the Reel Adventure concept, but as time went by players seemed to grow less enthusiastic, some describing it as “tedious” or even flat out boring.

Now, gamblers are a grumpy bunch by nature, in particular when not winning, although in hindsight we must admit that some of the criticism fired from the gambling community was indeed well-grounded. Holy Diver is nonetheless an impressive feat of ingenuity, innovation and creativity that turned out to be a major hit for Big Time Gaming, outperforming both Extra Chilli and Millionaire on launch stats. Not bad for an online slot with roots dating back to pre-Bonanza days.

After months of persistent rumours swirling around Danger High Voltage 2, an announcement was finally published on Big Time Gaming’s official website on the 29th of January, confirming the rumours to be true. Universally acclaimed and widely regarded as a masterpiece, the original Danger High Voltage is one of few BTG creations not involving the Megaways engine. It is no less of a powerhouse, however, and is known to shock players with wins of over 5000x without even having triggered the bonus. With such a successful sibling, the sequel undoubtedly has a lot to live up to.

As implied by the title, the narrative is once again constructed around a classic hit single, namely The Final Countdown, recorded and released by Swedish rock band Europe in 1986. Though a fundamentally different slot, most players familiar with the original will feel right at home with the 6-reel, 4-row, 4096 win ways reel set. That is where most of the similarities end, however.

In this top-down sci-fi action slot there is an array of features to keep you entertained while waiting for take-off. Available in the base game as well as in the bonus, the Reel Clone feature may come into play on any spin to synchronise up to 4 reels. Cloned reels can also result in Clone Wilds, bringing with them multipliers of up to 256x. Upon triggering the bonus you’ll be faced with two options. You can either opt for The Countdown feature where you’ll benefit from a roaming multiplier wild that increases in size as a result of every retrigger, or you can choose to go for the Heading for Venus feature with focus on Reel Clones and a Velocity Wild.

Aesthetically, you’re invited to a space shuttle launchpad where a take-off is waiting to happen, hence the title. Set against the backdrop of a neon-lit city skyline with the reels framed by a lighting rig and flanked by a space ship, The Final Countdown has a retro-futuristic vibe to it that looks quite spectacular and which is further enhanced by the title track. In typical BTG fashion, you will come across low-value A to 9 royals as well as green, blue, red and purple gems. As usually is the case, the purple gem is the most rewarding out of all standard symbols, giving you 25 times the stake for 6 across a payline. There are 2 special symbols listed as well - the golden bonus scatter symbol and a base game wild represented by a female crew member.

The Final Countdown benefits from several powerful features capable of dishing out colossal wins of several thousand times your stake even in the base game.

First out is the Reel Clone feature which can trigger randomly on any spin. When activated, up to 4 of the middle reels will lock and synchronise to produce identical reels where even scatter symbols can be cloned. Now, if a wild lands on any of the cloned reels, the Clone Wilds feature comes into play. Based on the number of reels cloned, the wild will expand both in size and multiplier value. 2, 3 or 4 cloned reels will result in x4, x27 or x256 multiplier wilds respectively.

Even with the great potential on offer in the base game you will want to trigger the bonus as it significantly increases your chances of winning big. 3 or more scatter symbols appearing anywhere on the reels will trigger the bonus where you can opt for one of two features:

In an attempt to outdo themselves, BTG has gone absolutely bonkers with the multipliers. The volatility involved is quite monumental as well and can only be described as a paradox. You can’t quite tell if you’re floating in zero gravity or sitting on top of a rocket with overwhelming g-forces pressing against your chest. Either way, the explosive-type gameplay will most definitely keep you on your toes and might just even leave you gasping for air.

All elements are on point here and come together seamlessly - from the visual presentation and the catchy soundtrack down to the skillfully balanced RNG. Fascinatingly, there are even fragments of other BTG slots found here such as the synchronised reels from Queen of Riches.

While Holy Diver might have been more of an experiment, The Final Countdown is about going back to the roots, injecting a fresh take on Danger! High Voltage while delivering a lethal dose of raw, high variance, in your face action. In the 1986 top hit, Joey Tempest asks “Will things ever be the same again?” For those who dare to board the space cruiser, life changing wins could be waiting around the corner. 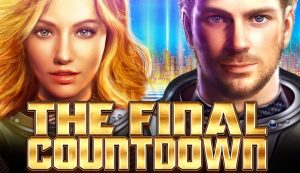