✅ Play Dawn of Egypt on

If there is one developer who digs the Egyptian theme it is Play’n GO. What’s the tally up to now? Hard to say but there is quite a selection for fans of the genre to fire up. The latest to come off the production line is Dawn of Egypt which is a sequel to Legacy of Egypt. A danger with pouring forth similar games is that they start to blur together and produce diminishing results. What is Dawn of Egypt’s impact to be?

As we’ve so often come to expect from Play’n GO the game is certainly easy on the eyes. Symbols are gorgeously high-def, and the background brings Ancient Egypt to roaring to the screen. The 5x3 reels are located in a temple at the base of a pyramid which is backlit by blazing sunlight. Play’n GO has a fair amount of practice building these types of slots, and they have certainly become dab hands at recreating the magic of the era. Once players are done admiring the scenery, they can select appropriate bets from 10 p/c up to £/€100 per spin and play begins. The reels are crossed by 10 paylines on which to form combinations of three matching symbols or more for a payout. 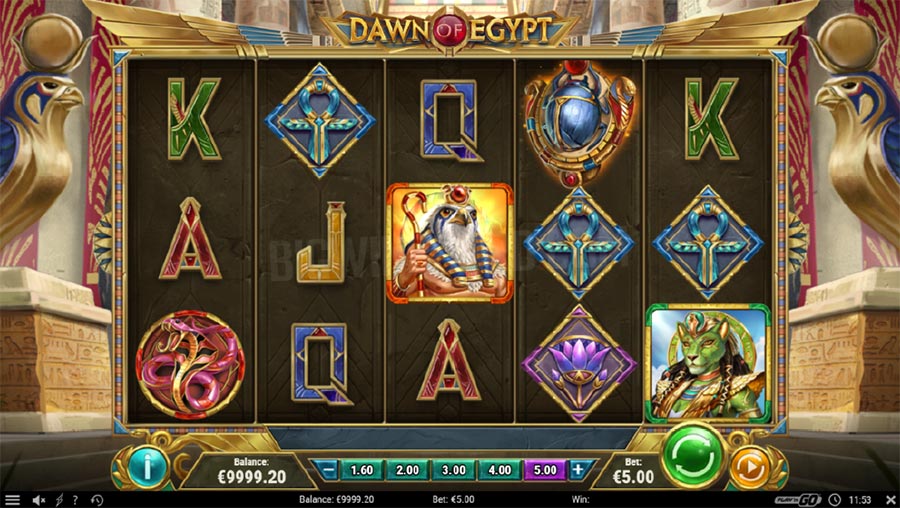 Symbol values are rather high right across the board. First up are the low paying J – A royals, all well-styled according to the theme. Next up are the high pays where we get a lotus flower, Ankh, scorpion, snake, and the gods Bastet and Horus. The falcon god Horus brings in a solid 100 times the stake when five appear on a payline. The standard wild, which is a shiny scarab ornament, will give you 100 times the stake for five of a kind while also performing its usual duty of substituting for any other standard pay symbol.

Hardcore players will be pleased to see a high volatility rating here (7/10), albeit not as high as Book of Dead for example which comes in at 1o out of 10 in terms of volatility score. Keep an eye on the RTP, which is comes in at 96.23% by default but which can vary by market.

Alongside decent returns during the base game, the developer wizards at Play’n GO have put together a real mash-up of features. It is nice to see that more though went into developing them then it did with choosing the genre. Like exploring ancient ruins, the key feature is a two-tiered level of Free Spins. Initially, free spins are triggered by three or more scatter symbols which can land on any reel. The mysteriously blue pyramid scatter also brings top returns with it. Get four of five on a payline for 5x or 20x the stake. However, get lucky, and score 5 scatters then you are looking at a 1,000x payout.

The free spin round begins by spinning the Wheel of the Gods to determine how many spins there will be. The wheel can produce 3, 4, 5, 6, 7, 8, 9, 10, 15, or 20 free spins in total. On every single free spin, one high paying symbol is randomly selected. Any lesser value high pay symbols that land on that spin are automatically upgraded to the chosen high pay symbol.

As mentioned in the intro, Play’n GO has a soft spot for Ancient Egypt flavoured slot. The benefit for players is that they pull them off well, which you’d expect after all that practice. The interesting thing is that they are starting to kind of look alike. Symbols and backgrounds vary from slot to slot, sure, but they have a familiar ‘quality’ to them. You just know when you are playing a Play’n GO Egyptian themed slot.

That’s not a bad thing though as their quality is typically good. On a positive note, Dawn of Egypt’s parts all add up to a dependably enjoyable slot. Potential is equally juicy and is the familiar 5,000 times the stake that Play’n GO like to go with. Dawn of Egypt’s high volatility rating means that when it goes off, lucrative rolls are possible. This is more likely to happen during free spins naturally. The way free spins can lead to Pyramid Spins is not only a great idea but adds an extra dimension to the nerves as well as well as to winnings. The game is not just all about its free spins though. Decent symbol values during the base game prevent it from being a snore-fest. Of course, lines of the highest paying symbols are rare, but they are there lurking should Horus feel the urge to bestow some coins on his acolytes.

If you don’t mind a little unoriginality, players will find an entertaining slot with Dawn of Egypt. It ticks all the right boxes, and there is nothing glaring with it in the slightest. Of course, five minutes after playing it can blur into obscurity along with a score of other Ancient Egypt slots. But while its reels are spinning, Dawn of Egypt is more than capable of doling out gratifying gaming.