After a period of time that almost progressed from ‘break’ to ‘hiatus’, NetEnt returns with another classic slot upgrade courtesy of Big Time Gaming‘s Megaways engine. This time it’s the laid-back, gem-filled extravaganza Dazzle Me which has been reworked. The new version is not so laid back this time around, and just about everything about the first one has been prodded, stretched, or expanded. The result is a veritable 2.0 experience that will have fans of the original needing shades to shield their eyes from all the dazzling.

Dazzle Me Megaways is the fourth slot exclusively from NetEnt to use Megaways, and three of them so far have been classic makeovers. Aside from Divine Fortunes Megaways, which received mixed reactions, the others have all had a fruity, sweetie, bright vibe going on, of which Dazzle Me Megaways is another prime example. One noticeable change right off the bat is an extra 6th reel tacked onto the edge of the grid. This time, the layout is 3-3-4-4-5-5, and win ways have mushroomed from 76 to a possible 99,225. On every spin, reels hold anywhere from 2 to 9 symbols each, upping the suspense factor. The rest of the screen hasn’t changed much, with a background made up of some blurred lights or something.

Getting all razzed is possible on any device where bets from 10 p/c to £/€50 per spin may be set. As has become the norm with NetEnt, games come in several RTP versions with the default being 96.10%. Volatility, meanwhile, is sure to be higher than its original low setting, but not by a crazy amount. Dazzle Me Megaways might be able to go off when the right symbols line up, but it was difficult to do so during testing sessions. The principal reason being the challenge of triggering free spins.

Jovial is one way to describe a paytable made up of 6 low-pay gem symbols, as well as four-leaf clovers, hearts, bells, and 7s. You won’t get much out of them unless they land in big numbers as six-of-a-kind values range from 0.5 to 3 times the stake. A big shiny diamond wild is on standby to help by substituting all symbols except scatter symbols.

Matching symbols in any position on a reel left to right from the first reel results in a Megaways win. An avalanche feature then clears winning combos from the grid with a satisfying pop, allowing other symbols to tumble down into the spaces. Repeat wins are possible and continue to occur until no new winning combos take place.

Landing 4 scatter symbols in any position awards 8 free spins. If more than 4 are in view, then the extra scatters add +4 free spins each. The bonus game switches up location to an orange-lit room, not unlike the one that appeared in BTG’s Star Clusters. In free spins, at least one Dazzling Wild Reel will be used on every spin, and wilds appear on them or in Avalanches. The number of wilds symbols landing on each Dazzling Wild Reel is equal to the number displayed on a counter above the applicable reels. Each counter starts at 2 and increases by 1 every time wild symbols on the respective reel are used in a winning combination.

Dazzle Me Megaways was an enjoyable game to test run, but not one with huge replayability. The imagery is pleasant yet lacks personality, while the gameplay is okay. It does get a tad repetitive after a time. Unless you’re a major fan of Dazzle Me part one or feel the need for a Megaways slot possessing a layout that deviates from the norm, Dazzle Me Megaways might struggle to appeal. Maybe an extra feature or more frequent free spins might have made the deal sweeter. On an aside, it’s interesting to note NetEnt continues to favour makeovers rather than come up with new concepts to tag the Megaways name to, yet fans of older games are no doubt lapping them up.

One common denominator so far in NetEnt’s three Megaways makeover games is they have been rather difficult to trigger bonus games in. Secondary features like Dazzling Wild Reels are no problem; they showed up on a regular basis tossing together wins to keep your spirit up. Free spins though? They proved to be a far greater challenge. So much so that the thought of repeat goes on Dazzle Me Megaways carried a slight cloud of dread. Perhaps this is why each one of the makeover games so far has possessed a bright, fluffy, positive look to mitigate what can be a slog. Of course, if you make it through to the bonus, rewards are there, to the value of 10,000 times the stake.

As far as Megaways upgrades go, Dazzle Me Megaways can be considered a success. It builds on what the first Dazzle Me slot had to offer and seamlessly integrates Megaways within the somewhat unusual, though not unique, grid layout.

Dazzle Me Megaways builds on what the original had to offer and seamlessly integrates Megaways within the somewhat unusual, though not unique, grid layout. 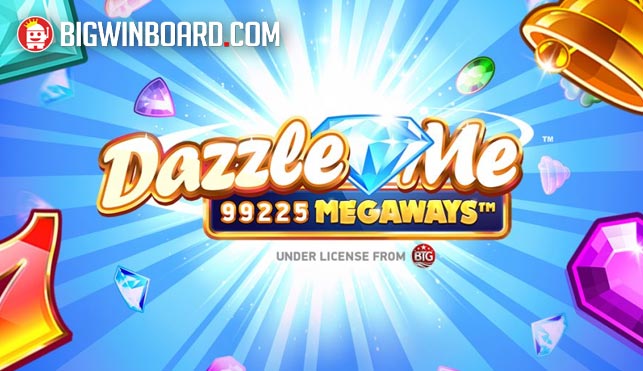