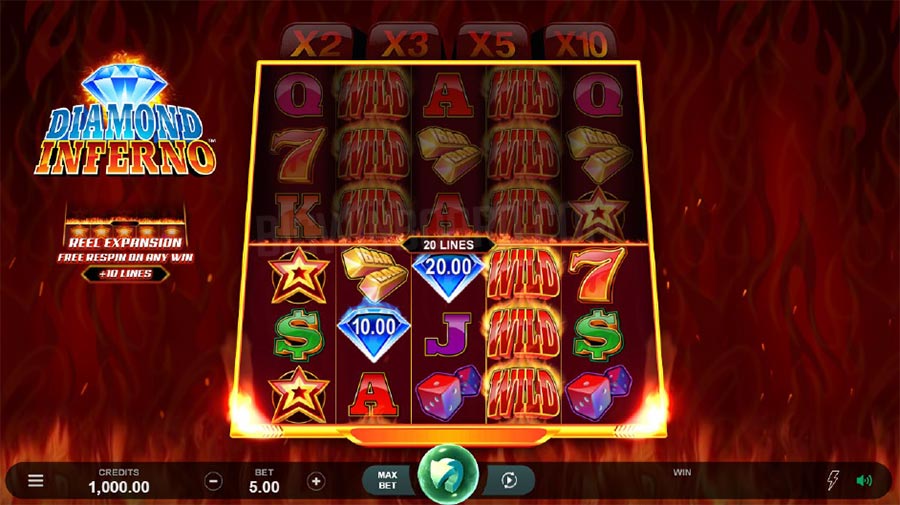 Microgaming partner Triple Edge Studios turns up the heat in the classically geared slot Diamond Inferno. Turning up the heat might be an understatement. Setting fire to your screen might be a better way to put it since fire features heavily, visually at least.

As to the gameplay, things aren’t always so scorching. Slots covered in full-screen flame shows can be a real hit or miss affair, often more of the latter than the former, for anyone but the hardest of hardcore fan. Then again, with expanding reels, a Multiplier Trail, and notable potential perhaps things are looking up. Time to put on the oven mittens and find out.

Fire, diamonds, and a somewhat unusual reel layout split in half appears when the game loads. At first, players have access to a 5-reel, 3-row sized grid, with extra rows unlocked when wins occur. Sorry to leave you hanging, but more on that dynamic shortly.

Playable from 20 p/c rising to £/€20 at the upper end of the scale, Triple Edge has taken a middle-ground approach thanks to a medium volatility and an RTP of 96.19%. The pace of the game runs fairly hot, thanks to a hit frequency of 32.10%. Hit frequency, on the other hand, is a little surprising given the way features are triggered on every single win, but the rest of the math model does an effective job of balancing everything out in the long run.

When it comes to symbols, classic slots fans will be on familiar ground with dice, dollar signs, bars, lucky sevens, and stars as the premiums. On the low pay side are a quartet of J-A royals making up the numbers. Winning combinations form when a line of at least three matching symbols land on one of the 20 default win ways.

As to the values, they aren’t too bad at all. Starting on the low side, 5 Jacks will get you 1.25x up to a cool 100 times the stake for 5 stars on a line. Lending a helping hand in this regard is the flaming wild which appears on reels 2, 3, and 4, sometimes stacked, to substitute for anything but the scatter symbol.

Diamond Inferno isn’t the simplest classic slot you’ll come across due to a few unorthodox mechanics. It’s not exactly rocket science though, revolving around respins, expanding reels, and scatter wins.

Let’s start on respins. Whenever a win hits on the initial 5x3 grid, a 4th row is unlocked, increasing the grid to 5x4 in size with 30 paylines. Wins also trigger a respin. On the respin, if a second combination hits, the 5th reel is unlocked, opening up paylines to 40, while awarding another respin. Finally, if another win occurs, it unlocks the full 5x6 grid, crisscrossed by 50 paylines.

If wins occur when the grid is at full size, then the Multiplier Trail feature, borrowed from Microgaming, comes to life while continuing to award respins. The Multiplier Trails increases on each consecutive win from x2, x3, x5, x10 where it maxes out. Win multipliers are applied to total wins from the current respin in play. Once no new win appears, then the respins come to an end, and the grid resets back to the default 5x3 mode.

The last feature in Diamond Inferno is the blue diamond scatter. Instead of triggering bonus games or free spins, scatters award instant prizes, the value of which depends on the row the symbol is on. Scatters on row 1, 2, 3, 4, 5, or 6 are worth 1x, 2x, 4x, 6x, 10x, or 20x the stake, respectively. Scatter symbols appear only on reels 2, 3, or 4, where at least three are needed to result in a payout.

Well, what can we tell you that you probably can’t deduce from a screenshot? Diamond Inferno is so niche specific you’ll know whether you like it after just one or two spins. It’s got all the ingredients a classic/Vegas slot devotee could ask for, plus a bit extra.

One interesting point about Diamond Inferno can be found in the accompanying game specs. There it states Diamond Inferno is a continuation of the popular Gameburger slot 9 Masks of Fire. Strange, because besides the flames, there isn’t a whole lot to really connect the two. Not saying they have nothing in common, but that line raised an eyebrow in surprise.

Now, on to some critique. Firstly, the gameplay can get a little repetitive, like watching the tide go in and out. You get a win, respins do their thing and go all the way to the Multiplier Trail, or they don’t. Usually, they don’t, though wins hit pretty regularly so players generally get quite a few chances to see how far they can take it.

If you are wondering how far, the answer is further than you might think. Hit Diamond Inferno on a good day where Triple Edge claims wins of up to 11,750 times the bet are possible. Again, another raised eyebrow and that figure will probably warm more hearts than all of the flame imagery going on.

Triple Edge hasn’t really done one of these classically styled slots before. So, fair enough, most developers feel the need to go down this route at least once or twice. It’s like a rite of passage or something, and in that regard, Diamond Inferno isn’t too bad, for what it is. There are a few twists on the standard formula, and the potential is surprising. So, if you need a pinch of novelty to go with your classic slots gaming Diamond Inferno might be worth taking the time to check out.

Fans of classic slot gaming may appreciate the mechanics Triple Edge has mixed into Diamond Inferno while getting fired up over the game’s potential. 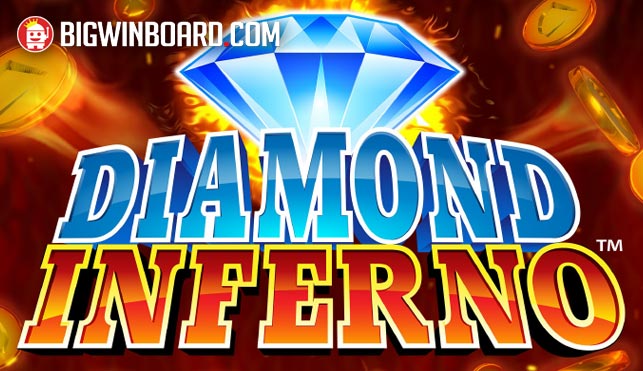