Demo play is not available in your region. Please visit one of the casinos listed below for free play.
Red Tiger

Players, if you've ever wanted to 'Enjoy the feeling of being excessively wealthy' or felt the need to acquire 'Mansions, yachts, and private jets to show your power', then Red Tiger may well have the slot you're looking for. Made in collaboration with Max Win Gaming, Dream Destiny is a money-themed slot focused on the luxury consumer items side of things. It isn't going to do all the heavy lifting, however. To get the most out of this fantasy requires a healthy dose of imaginative thinking, and due to limited potential, a recalibration of what the term 'excessively wealthy' means.

Played using 5 reels and 20 paylines, the reel-spinning action takes place on the steps of a modern villa, all sharp lines and floor to ceiling windows to take in the million Euro views of somewhere like the Med, presumably. Next to the game grid is a couple of fly whips of the Porsche/Ferrari variety, while on the left, nothing says class like topiary trimmed into the shape of a dollar sign. It's the sort of place perfect for snapping some envy-inducing Instagram pics as much as kicking back and unwinding after the effort it took to accrue the cash needed to pay for it all. 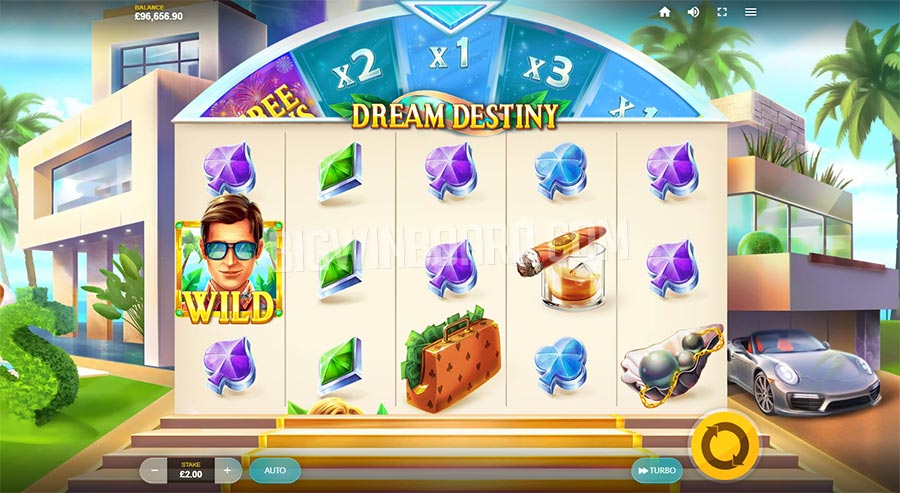 If you're planning to take on the dream machine, prepare for a medium volatility math model - rated 3 out of 5. Slightly higher is the hit rate of 4 out of 5, while the default RTP has been clocked at 95.88% during simulated spins. None of these numbers mean much in a wealth themed slot compared to the max win figure. Here, Dream Destiny comes up short. More on that soon but just brace for a number that really won't be covering a dream home or a supercar if hit. Maybe some labelled kicks and a fancy handbag for the missis, though.

Wins arise when three or more matching symbols line up left to right from the leftmost reel. Most are emblems of wealth, such as four gemstone designed card suits – clubs, diamonds, hearts, and spades. Then come cigars and whisky, pearls in an oyster shell, a suitcase stuffed with cash, followed by a glazed eye lady presumably overwhelmed by the display of affluence, and a trophy wife type as the highest paying tile. Values for the four higher paying symbols in a five of a kind win range from 7.5 to 30 times the stake.

Two wild symbols appear at various points in the game, one a credit card from VIP Bank, the other one a slick Larry Laffer looking mofo with one thing on his mind, living it up. Both substitute for any pay symbol to complete wins and are worth 2, 10, or 30 times the bet for 3, 4, or 5 on a payline. 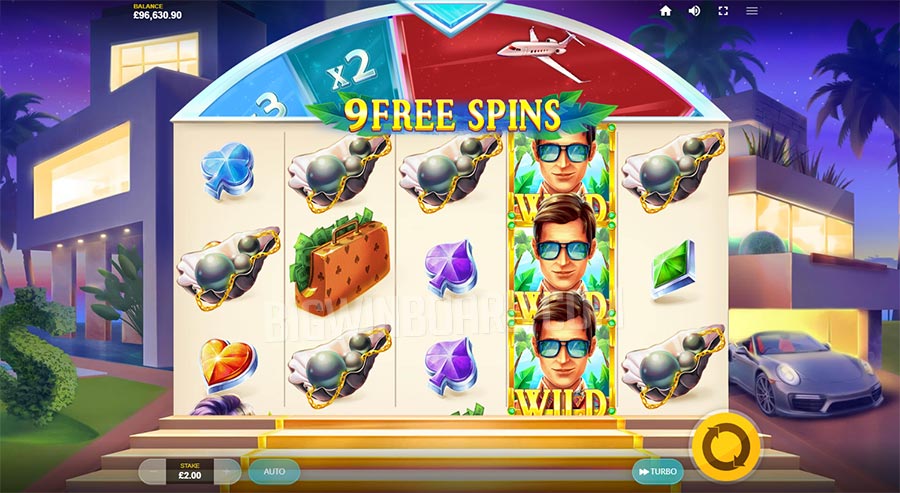 A rotating Dream Wheel means multipliers on every spin with the chance of activating one of 4 features. We say multipliers, but the most common is an x1 multiplier which won't alter the outcome of spins most of the time. The 4 modifiers are mystery symbols, stacked reels, random wilds, and free spins;

Lastly, hitting Free Spins on the wheel awards 10 free spins or retriggers 10 free spins if the feature is already in play. A tad disappointingly, the rules during free spins are the same as they are in regular base game spins; nothing changes.

Dream Destiny comes across as tongue in cheek without even trying. At times, it's hard to tell if Dream Destiny is being serious or just trolling. If the former, it walks a dangerous line of becoming a parody of itself. Sure the game's all a bit of a laugh, a bit of wishful thinking, but Dream Destiny might have been more palatable if it used a dash of humour instead of being so serious about flaunting riches.

The Destiny Wheel is a bit of a gip when you realise for the majority of the time, all it slings out are x1 multipliers which do nothing. Like, what's the point of teasing like that? Every so often, you get a bigger multiplier, say x5, in conjunction with a decent line win, that's alright. So are the other features when they deign to trigger. However, another disappointing realisation is scoring a full line of five trophy wife symbols, boosted by an x5 multiplier, leads to a payout of 150x the bet, which is roughly one-tenth of Dream Destiny's full potential. Max this credit card out, and you are looking at a win of 1,539 times your stake. That might be better than paying full price for a fake Rolex, yet the top win fails to live up to the game's hype.

For a wealth-based slot, there just isn't enough wealth being tossed around to make dedicated gamblers or adherents to avarice take notice. Maybe if the makers turned down the cheese, cranked up the max win, and loosened the multipliers on the wheel, Dream Destiny might have been more fun to play. But hey, they didn't, so it ends up being a miserly game that is all front with little substance backing up the boast.

Low potential rewards prevent Dream Destiny from living up to a fraction of its fronting. 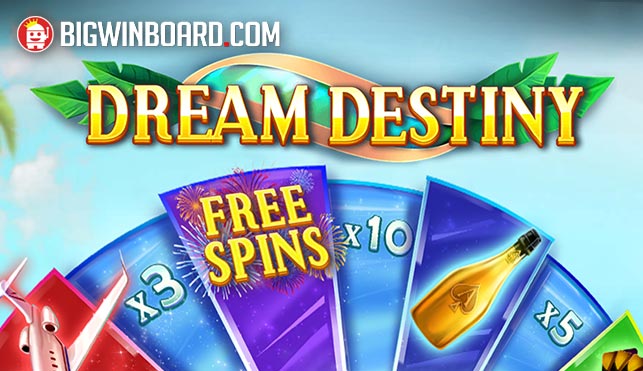