VALKYRIE - what is hidden in snow, is revealed at thaw

Swedish provider ELK Studios wraps up the year with a title that may possibly be one of its most ambitious productions to date. Set in the worlds of Midgard and the flames of Helheim, the quest for big wins takes place on a 5-reel, 4-row, 1024 win-all-ways reel set. With host Freya by your side (goddess of Love), backed by The Valkyries (sounds like a girl band); Gane, Helena, Andora and Tyrsa, their weapons are your tools and can appear as regular or massive high-value symbols.

In this Nordic mythology themed high variance slot, playable on all devices from €0.20 to €100, players will benefit from free spins and EPIC symbols with three randomly triggered features: The Shield of Chance, The Arrow of Fortune and The Sword of Destiny.

Visually, Valkyrie is quite an impressive feat coming from a relatively small developer. The intro scene is both monumental and dramatic, but while its more superficial elements possess some remarkably stunning transitions and effects, its mechanics don’t quite have the same shine.

There are as many as 12 standard symbols included in the game, making it a bit more crowded than we would have liked and thus decreasing the chance of landing winning combinations. The low-value symbols are represented by J to K gem-decorated steel-cast royals. Moving up we find the Hammer of Thor, the Midgard Serpent, the Fenrir wolf and gauntlets, as well as the four god's Gane, Helena, Andora, Tyrsa, and the main character Freya who is worth 4 times the stake for 5 of a kind.

The symbols appear in stacks of 3 and as blocks in three sizes; 2x2, 2x3 and 3x3 which can appear both in the base game and in the bonus features. The game comes with 3 special symbols as well - bonus symbol, scatter and the wild which is confusingly similar in design to the scatter and some of the high-paying symbols.

Central to the game are the 3 Valkyrie features which are awarded when landing 3 or more bonus scatter symbols in the base game (the more bonus symbols, the more potent the bonus) or when triggering the free spin feature:

3 or more scatter symbols anywhere on the reels will trigger the free spin feature accordingly:

The free spin feature can re-trigger, which is not all too unusual as we have experienced, awarding you with the same set of free spins as stated above. Unless we missed out on some critical facts such as enhanced reels or whatever, there is not much more to the free spin feature than this.

In action, Valkyrie presents itself as a high variance slot with a lot of bells and whistles. In reality, the payouts are disappointingly low even when landing connecting Epic symbols and, although hard to pinpoint, something just feels awkwardly off about the mathematical model. 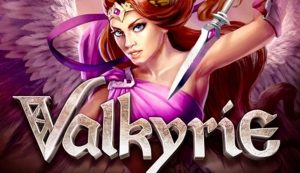