Fruit punch spiked with Devil's Piss: All you need to know about Extra Juicy by Pragmatic Play

One of our most popular casinos
Exclusive slot games

Despite being the world's most popular fruit, the tomato is rarely featured in video slots. We know - tomatos aren't really that exotic but there's a logical explanation to why certain fruits are more commonly associated with slots than others. See, at the beginning of the last century, the machines delivered winnings in the form fruit-flavoured chewing gums using images of the flavours as symbols on the reels. The tradition stuck and was passed from one generation of slot machines to the next, which is why you'll see cherries and watermelons occur so frequently in fruit-themed slots still to this very day.

If you're hoping to get paid in bubble gum in this Pragmatic Play video slot, you're setting yourself up for disappointment. If, on the other hand, you're dreaming of life-changing wins, here's a rather basic yet fierce slot capable of delivering wins on par with progressive jackpot machines. So don't let the simple appearance fool you. This beast packs a punch, offering extreme volatility and a chance to pocket up to 3 million Euros.

Playable from between 0.10 and 50€ per spin using 5-reels and 10-paylines, Extra Juicy is as straightforward as it gets and that applies to both the gameplay as well as the layout. Set against a backdrop of animated sun-induce lens flare, the plain white reels comes fully stacked with 7 well-known fruit slot symbols. Starting from low to high value you'll see cherries, lemons, oranges, plums, blueberries, watermelons and bells, the latter being the most top rewarding giving you 100 times your stake for 5 across a full payline.

The base game involves no features whatsoever and the paylines are a bit unconventional. You don't necessarily have to land winning combinations starting from the leftmost reel; they can start from the second and third reel as well as long as there are 3 symbols to connect.

The free spins bonus is obviously the most exciting part of Extra Juicy and what everything comes down to. Here you will benefit from a progressive multiplier that draws inspiration from another Pragmatic slot called Da Vinci's Treasure, only here it's cranked up even further. To trigger it, land the diamond scatter on reels 1, 3 and 5 simultaneously which will give you 12 free spins to start with.

Now, above the reels you'll see a row of numerical values representing the progressive multiplier that will increase by 1 on each spin. By the 12th spin, winning combinations will be multiplied by 12. It gets even more interesting, however. If you retrigger the feature you'll receive an additional 12 free spins, effectively stretching the multiplier to 24x. Amazingly, you can do this 4 times, meaning it's possible to play 60 spins with a 60x multiplier on the last spin, giving you a chance to land the 60,000 times your stake jackpot.

Less is more, that is no less true when it comes to gambling. On offer here is an extremely bipolar monster of a slot that can annihilate your balance in no time or potentially change your life. Bonuses are admittedly hard to trigger on Pragmatic slots and don't be surprised to run into plenty of dry spells. Heck, even landing a bonus is no guarantee of a decent win. But for those seeking the thrill of explosive jackpot potential and who are ready to bite the bullet, Extra Juicy embodies what gambling is all about. 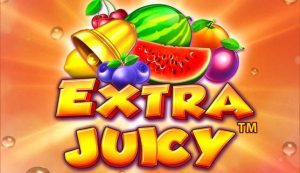