The Power Reels series goes off-world for a gem-filled escapade, big on reels and rows, relatively small on pretty much everything else.

Developer R7 in conjunction with Red Tiger expands the Power Reels range in a Starburst(ish) slot titled Gems Gone Wild. While nowhere near as risqué as other ‘Gone Wild’ genres some might be accustomed to, it’s not a super exciting game in general truth be told.

Other slots in the Power Range have tended to employ some form of selling point, to boost their appeal. Something a little out of the ordinary to make you think, ‘well the rest of the game might not be amazing, but at least it’s got X’. It’s not obvious from the outset what that might be in Gems Gone Wild, so let’s have a dig to see what we can find.

The first look isn’t bad, perhaps a touch plain, but there is a nice swirl in space effect going on. Visuals are backed by a housey/jazzy/funk track which you often come across in an outer space slot. The music is nice, not overly memorable, but a pleasant wee foot-tapper to accompany the game.

If you’ve never played a Power Reels slot before the first glance can be a bit overwhelming. Like looking up at the Burj Khalifa from street level, the sheer size of the thing can be a jolt. At 8 reels in width and 6 rows high, there is a lot happening on the screen. Despite the magnitude of the grid, there are just 30 paylines in play.

You may think that sounds under-gunned, and no one’s arguing the point, but Gems Gone Wild does have a pay system which improves matters to an extent. The first thing to know is that three or more adjacent matching symbols create a winning combo.

The magic, if you will, is that combos can land anywhere on a line to payout. They must be adjacent though – it’s not ‘Book of Gems Gone Wild’ after all. But, a paying combination could sit on reels 3, 4, 5 for example, or reels 6, 7, 8 let’s say. Also, due to the number of reels, it is perfectly fine to have more than one winner on a pay line. So multiple symbol types can cause payouts from a single payline.

Medium volatile, players can select stakes from 10 p/c at the lower end, up to £/€20 per spin for the higher rollers. RTP, meanwhile, has slipped since Zeus Lightning back into the sub 96% zone at 95.68%.

The say size doesn’t matter, but on the Gems Gone Wild paytable, it does appear to be the case. The eight regular pay symbols are all gems and the higher up the paytable you go, the bigger and more valuable they get. It maxes out with the circular golden one, where eight of a kind reaps a reward of 75 times the bet. The only other symbol in the game is the wild. Its core role is to substitute for any other pay symbol to create a win. Since more than one symbol combination can land on a payline, wilds will only connect with the highest paying type in that situation.

On any spin, random wilds may appear to trigger the Locked Wilds mode. In this mode, if new wilds appear on the next spin, the old ones are locked to the grid and connect for new wins. Otherwise, the old wilds disappear from the reels and the game goes back to normal mode.

Gems Gone Wild is possibly the least exciting slot in the Power Reels range so far. There just isn’t much to do or cross your fingers for. No sort of bonus game, no free spins; just like the great void of space where it all takes place, there isn’t a whole lot of anything really.

Other slots in the Power Reels range have had at least one sweetener to draw in a wandering eye. Zeus Lightning had the high RTP, Five Star some impressive potential, while Phoenix Fire the looks. Gems Gone Wild is the standout, managing to break with tradition by setting everything to ‘meh’.

Sure, there’s the big reel set up, but the limitation of its low paylines don’t help, and there is scant else taking advantage of its size. Ok, so winning combos can start on any reel, but Gems Gone Wild ends up like a 10-foot basketball player who can’t dribble or shoot. Unless players are really into the theme, they’ll be catching zees in no time.

And yet, Red Tiger clearly know their stuff, so there is no doubt a segment of the market ready to lap Gems Gone Wild up. It is fast, straight forward gaming, and potential of 3,000 times the stake can technically be achieved on any spin – provided the Locked Wild feature literally goes wild.

Unless gems in space or locked wilds/respin style features rock your world like nothing else, it is hard to think of many compelling reasons to give Gems Gone Wild much serious consideration. 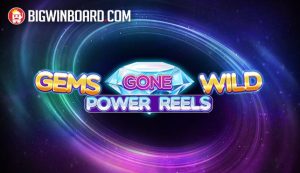