Join Gonzo for a treasure hunt in our new slots-inspired live game show where each player’s journey is unique, based on their choices! The Spanish explorer Gonzo has been searching for the lost golden city of El Dorado and its treasures in the hugely successful video slot Gonzo’s Quest™. Incredible graphics, smooth animations and exciting features have helped Gonzo’s Quest™ become one of the world’s favourite online slots. Gonzo is now coming to live, ready for more exciting adventures.

Together with game show hosts and players, they will hunt for treasures in a new quest – Gonzo’s Treasure Hunt™. Against the backdrop of an ancient Incan city, you’ll find the main feature of the game – a giant wall with 70 stones where you’ll hunt for prizes.

You are on your own unique treasure hunt deciding which prizes to look for and how many chances you need to find them. But that’s is not all! Prize Drops may happen, which adds excitement and can increase winnings. If you’ve played Gonzo’s Quest™, you’ll recognise the familiar elements. Whether you’re new to the world of Gonzo or not, all players will be charmed by the animated Gonzo and his antics in this unique live game show, with chances for supersized winnings! 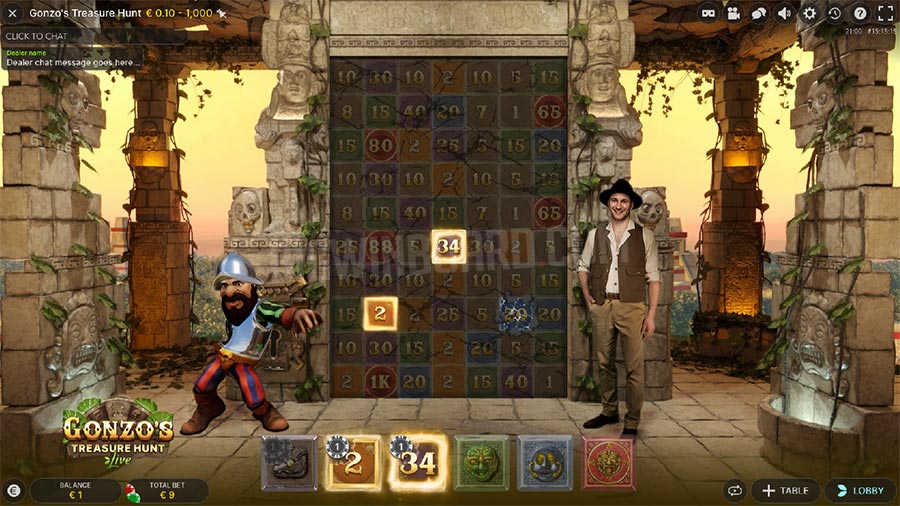 You select which stones you will try to find by choosing from six different coloured stones on the betting grid. Each stone has a payout value attached (1x, 2x, 4x, 8x, 20x and 65x) as a prize. A higher value means there are fewer stones to find on the wall. You can also choose how many Picks you want to buy, between one and 20.

Each Pick lets you select one stone on the wall. The more Picks you buy, the bigger the chance to win the stones you’re trying to find, but it comes at a price. The total bet placed is the number of Picks multiplied by the total value of bets placed on stones. For example, by placing €2 on the 4x stone and €5 on the 8x stone, and three Picks selected, you pay (€2 + €5) x 3=€21.

When the betting time has expired, all the stones on the wall are shuffled and the value of the stones are hidden. The countdown timer starts, and the treasure hunt begins! You search for treasure by selecting between one and 20 stones from the wall, depending on available Picks. Each player has a different treasure hunt, based on their choices. 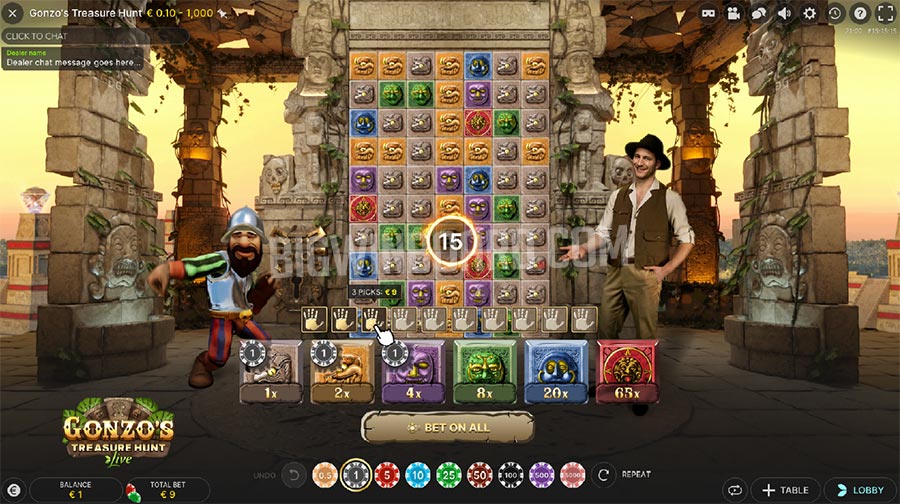 Gonzo will then turn the key to start the Prize Drop to add extra payouts to the hidden prizes. Bonus Prizes will appear at the top of the wall, and if there’s an opening in the row below, the prizes will drop down and stop at random stones, adding to the value of the hidden stone. Up to seven prizes, or no prizes at all, can drop onto the wall per Prize Drop round.

Another exciting part of the Prize Drop is the Re-Drop! The Re-Drop symbol triggers a new Prize Drop adding further excitement and opportunity to increase the prizes’ value. A maximum of 10 Re-Drops can occur during a game round. The Bonus Prizes will drop until they stop on one randomly selected stone in the column in which they were dropped. Each time there’s a Prize Drop, Bonus Prizes, a multiplier and a Re-Drop symbol can appear in the top row.

The maximum amount an individual stone on the wall can receive during the Prize Drop is 20,000. At the end of the game, the wall reveals all the stones’ values, and you and all other players see if you successfully picked one or more of the stones you selected at the beginning. You win if you picked one of the stones you’ve placed a bet on. If you won a stone that received a bonus value, this value is added to the standard payout value (1x, 2x, 4x, 8x, 20x and 65x). Your winning bet is multiplied by the won stones final value. Your original bet for each found stone is returned on top of what you have won.