Well, the NetEnt reskin machine continues to chug on and churn out more and more rehashed slots for the Asian market. This time, NetEnt has dug up a cheerful older title called Flowers (2013) from their back catalogue for a remake. The aesthetics have been stripped away, they’ve kept the features and mechanics, and tarted it up with plenty of Asian imagery. It must be a formula for success because these types of slots are starting to pile up. No doubt it’s quicker and easier than designing a brand new slot from scratch. It’s easy to get cynical about these sorts of things when they happen often enough. But we’ll try and leave judgements till the end and see how Happy Riches fairs.

The game is played using 5 reels, 3 rows, and is a rather simple looking slot. Reels are a plain purple/blue colour and are framed by a standard Chinese pagoda type structure. Clouds make up the background, and are topped off with a suitable in-theme soundtrack. Whilst the original slot displayed payline numbers beside the reels, the remake reduces that to a sign that simply says ’30 Lines’ on each pillar. Aside from that little detail, players get the same menu bar along the bottom of the screen as the original, which is a nice nod to the past. On there you can select bet levels from 1 to 5, and coin values of 0.01 – 0.5. Combinations of these options provide total stake values of 30 p/c to £/€75 per spin, and away we go.

The stats that come out of the math model tell an interesting story. First is a solid RTP rate of 96.32% and a medium/high volatility. Where the game might make friends is with its hit rate, which at 44.69% sends out a steady stream of wins.

Visually, Happy Riches is a lot less original than its predecessor and lacks some of the charm of Flowers’ symbols. The premiums from Flowers smiled, or frowned, or displayed some emotion which provided a dash of personality. This time around we get J-A royals that start the paytable off with a touch of Eastern design on them. Things get more interesting with the higher paying symbols which can land in singles or doubles. In both cases, they are the same 1x1 size, but if a tile has two of the same image on it then it counts as two symbols. In this category we get oranges, cymbals, lanterns, koi fish, and those waving cat things.

Three or more matching symbols are needed on a payline to trigger a reward as usual. But, due to the double symbols, it means there can be up combinations of up to 10 on a payline. The most valuable is the waving cat, and 10 of a kind are worth around 66 times the stake. Rounding off the paytable is a wild symbol in the form of a golden dragon. This wild can substitute for any symbol except scatters. It is also the highest paying symbol in the game with five of a kind paying out 166 times the bet - it also receives an extra ability during the features as you will see below.

Running alongside the double symbols, the key feature is a round of Free Spins. The Free Spin symbol is the scatter and 3 or more result in a payout of 2-10x the stake. Get 4 or more, though, and they trigger a round of free spins. The scatter can also land in a single or double form which means that 4, 5, 6, 7, or 8 scatters award 10, 15, 20, 25, or 30 free spins respectively.

During free spins, two things happen to help boost win rates and returns. The first is that the wild symbol can now appear in stacks of 2 or 3, meaning they can cover full reels. Also, all coin wins that occur have a x3 multiplier applied to them. Scatters continue to appear during free spins and the feature is extended when 4 or more of them are in view.

Happy Riches is pretty much what you would expect to find from this type of reskin/remake. Visually, it's basic but not bad looking, and its features are quite nifty when they go your way. It’s probably got the goods to entertain certain players looking for light-hearted Asian gaming with gentler gameplay. The original was immensely popular back in the days and actually remains one of NetEnt's best slots to this day, so you really can't go wrong with this remake either.

Its drawcard could have been potential perhaps, but things are not quite what they seem. Those bashing away on calculators might have worked out that mathematically, a full screen of wilds on a free spin is worth around 15,000 times the stake right there. However keep in mind that during simulations of millions of spins, the game produced rewards of around 2,000 times the stake at the most. It's best to choose whether Happy Riches is worth playing by using that realistic figure to base decisions on. With that, Happy Riches loses a little of whatever appeal it might have already had.

All up, the high hit rate in combination with the double symbols might appeal to some players who can’t get enough from this genre. Otherwise, it’s a generic, cheap and cheerful Asian knock off that fails to create much excitement.

With Happy Riches, NetEnt’s reskin department has chalked up another remake of an older slot called Flowers for the Asian market. 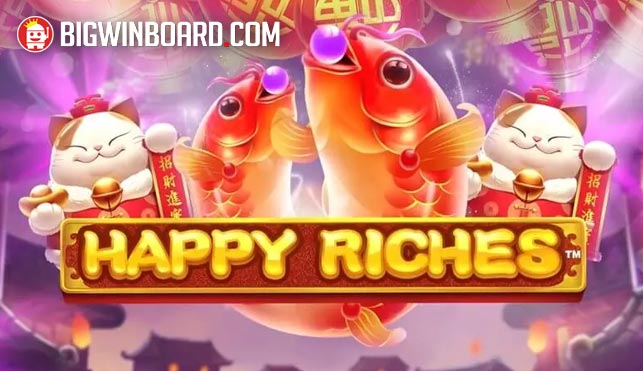