You probably don't need us to tell you about the abundance of Egyptian-themed slots, as well the number of PopWins games on the market. Ergo, the idea of an Egyptian-themed PopWins slot might not sound like the most thrillingly original idea. However, mash them together in the right hands, and you come up with something rather playable. Such is the case with HelioPOPolis from software provider AvatarUX. This is the umpteenth entry in the PopWins range and shows that there is plenty of gas left in the tank.

AvatarUX has continually honed its artistic abilities as the series has progressed, and HelioPOPolis is another good-looking example. It's not outrageously striking at first glance but is filled with appreciable touches, one being the oil painting quality of the Pyramids in the background. Who knows how many times this landscape has, and will, be used in online slots, yet AvatarUX has brought an individual touch to it. Ancient Egypt has an inherent otherworldly feel to it which the mysterious Egyptian-inspired EMD soundtrack echoes through the base game. Trigger free spins, and the techno winds up a notch or two, reminiscent of the clip of Sébastien Léger, playing live by the Great Pyramids of Giza.

Getting the Giza funk flowing is possible on any device, where stakes can be selected from 20 p/c to £/€100 per spin. Mathematically highly volatile, HelioPOPolis can be approached by playing normally, using the Ante Bet, or, where possible, by buying one of the bonus rounds. Its theoretical return to player value has been clocked at the precise figure of 96.026%, with no mention of whether this changes depending on how you play.

For symbols, 10-A royals are the lows, three miscellaneous objects are the mediums, and three Ancient Egyptian Gods are the highs. Hit a five-symbol winning combo, and the reward is 0.6x for the card ranks, 1.5-2.5x for the mids, and 3-4x the bet for the highs. Keeping in mind, five-of-a-kind wins only pay one way. Scarab wilds substitute for the paying symbols, but they only appear during free spins. Mystery symbols are another to be aware of, also only in free spins. When Mystery symbols land, they all reveal the same symbol.

Each base game spin starts by dropping 15 symbols onto a grid displaying 5 reels holding 3 symbols each. At this level, 486 ways to win are in play, paying left to right from the leftmost reel or right to left from the rightmost reel. When a win hits, the winning symbols are removed and replaced by two new ones. If a new win occurs after this, the system repeats, where reels can grow to maximum height in the base game of 6 rows high. At the end of a base game win sequence, the grid resets.

Before entering free spins, players can choose one of two features to be active:

As well as added wilds and Mystery symbols, free spins also benefit from an increasing win multiplier. Each win increases the multiplier by +1, which is persistent till the round ends. Reels start at 4 symbols high, and should all reels reach 8 high in free spins, the multiplier increases by +2 for any following wins on that spin, plus 2 free spins are awarded. Moreover, both Synced Reels and Extended Win symbols become active. Lastly, when reels reset in free spins, they reset to the lowest reel height. For example, if all reels reach 8 high, they stay this way for the remaining free spins.

When all reels reach 6 high in the base game, players are awarded 2 free spins with one of the two features – Synced Reels or Expanded Win Symbols.

Activating the Ante Bet increases the stake by 50% whilst also doubling the chance of triggering free spins. Otherwise, if there, players can buy free spins and pick one of the two features from 125x the bet. Both have various free spins, ways, multiplier limits, and prices clearly displayed in the buy menu. The third option costs 1,000x the bet to have all features active from the start. Further details are clearly marked in the buy menu.

We're almost running out of fingers and toes to count these PopWins slots on, but something that's not running out is AvatarUX's creative ideas. The studio's, dare we say, love for the PopWins mechanic continues to evolve and express itself in all manner of ways. Picking an Egyptian theme might not seem overly imaginative on the surface, yet AvatarUX has done a number on it, making it feel fresh, not to mention fun. The game's got an infectiously good groove to it, so whether you're into Egypt slots or PopWins slots, there's something here to entertain both camps. If you like both of those things, then HelioPOPolis is practically a must-see event.

There are a number of factors contributing to HelioPOPolis' success as a PopWins slot. For one, it deploys a wide range of features, albeit most of them are held in reserve until free spins are triggered or bought. Still, the base game putters along quite well, relying on PopWins to sling a few awards, and the Base Game Lock wasn't an unheard of experience during the review. When the bonus round is active, the game tosses a bunch of decent features together; though the features on their own aren't particularly unique, it must be said. Let's see, mystery symbols, big symbols, a progressive win multiplier, extending symbols, but the conjunction of so many in one place isn't super common, and the fun factor was amplified by the hard house, acid house, whatever house track, pumping away in the background.

The final piece of positive news is HelioPOPolis' max win of 20,000x the bet. This level never threatened to occur during our test sessions, but bonus buys did tend to be quite well-balanced. Even the 1,000x returned a few good results, and even those that failed to break even didn't miss by a shocking amount. Of course, results in the real world may vary, where anything can happen, so it'll probably pay to tread as carefully as ever. What remained consistent was the feeling that AvatarUX has plenty of good ideas tucked away up its sleeve, boding well for players who can't get enough PopWins action.

HelioPOPolis is undoubtedly one of the more slickly executed fun PopWins slots to roll off AvatarUX’s line so far. 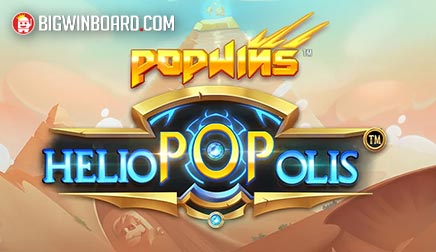