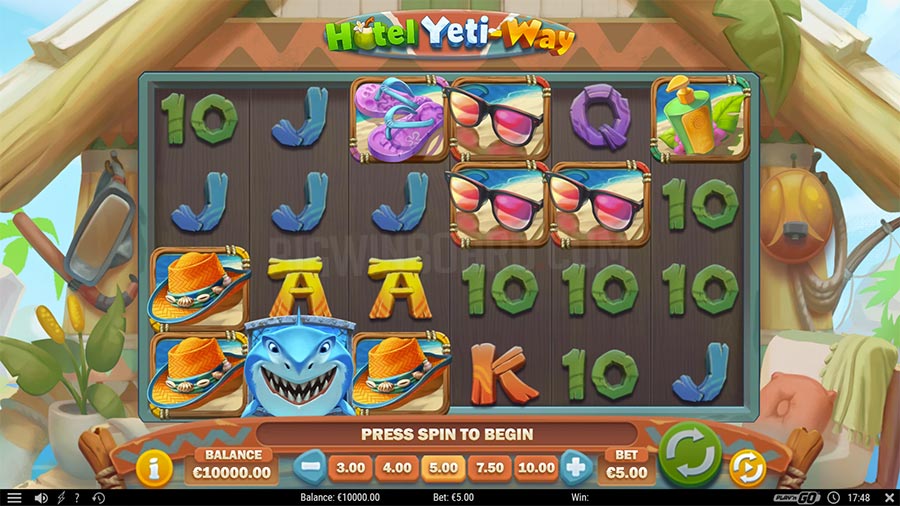 For many serious mountain climbers, the Himalayas prove irresistible simply for the fact Everest is the tallest of them all. Stand at the top, and you are literally on the roof of the world, looking down on every other spot on earth. In the past, only a handful of the very elite would even think to scale its heights. Now, in the Instagram, instant gratification era, paying experienced guides thousands of dollars will get you a trip up, not that it will be easy, or guaranteed to succeed. The increasing number of people climbing the Himalayas has led to an explosion of detritus left behind, and a clean-up in 2019 removed 11 tonnes of castaway stuff.

What some might not know (because this just been made up) is the more secretive residents have been getting in on the act as well. According to developer Play’n GO, the Yeti found a discarded suitcase full of holiday clothes on his meanderings through the mountains and decided to skip town to unwind on a tropical holiday. Hotel Yeti-Way follows the big guy’s exploits as he bungees, surfs, and dives his way around an island in a game full of features, not to mention some of PnG’s biggest potential.

Hotel Yeti-Way is played on a 6-reel, 4-row game grid offering 4,096 ways to win – in the base game at least. During free spins, it is possible to drastically increase the number of ways as you will see. Graphically, players get a brightly lit slot located in a wooden beach shack for the main game, shifting locations for the bonus depending on which option is selected. It all looks like a fantastic getaway from the rat race, just sitting on the beach doing nothing but soaking in the rays and enjoying some adventure sports. As long as the Yeti has packed his sunscreen and bug spray, he should be alright.

A big potential game gets a very highly volatile math model; Play’n GO has given a full 10 out of 10 rating to. Hotel Yeti-Way is not all about its bonus game, there are several interesting features to be found in the main game as well, yet the altering ways in free spins means that is where most entertainment comes from. The RTP is variable as it tends to be from this studio, and the value to look out for is the 96.18% version while stakes range from 10 p/c to £/€100 per spin, covering the majority of gambling requirements.

For the most part, winning combinations are formed when 3 or more matching symbols land on adjacent reels, from the first reel onwards. The bottom half of the paytable consists of 10-A card symbols constructed from spare bits of wood, while the upper section has sunscreen bottles, flip flops, sunglasses, hats, and a shark who likes he was borrowed straight from Push Gaming‘s Razor Shark. Premium values range from 1 to 3 times the stake for a six of a kind combination, and the shark actually pays out for two of a kind as well.

Wilds play a bunch of important roles in Hotel Yeti-Way. One of the wilds is a regular ice wild, substituting for any of the pay symbols. The other is a Yeti wild, substituting symbols and paying out 3x the bet if six line up across the grid. Yeti wilds also trigger features, coming up next.

All some people want on holiday is to lie in the sun all day catching up with their reading while they top up a tan. Not so this Yeti, who is a more adventurous sort. His primary interests are bungee jumping, surfing, and scuba diving – one of these activities is randomly triggered when a Yeti Wild symbol lands, awarding the following:

These features carry over to the bonus game as well, triggered when 3, 4, 5, or 6 scatters land to award 8, 12, 16, or 20 free spins. Free spins can be retriggered, up to a maximum of 40. Players choose whether they would like to play Bungee Free Spins, Surfing Free Spins, or Scuba Diving Free Spins. The difference is when Yeti Wilds land, they always trigger the respective modifier associated with the free spins name. It means players can select the volatility level and feature they like best from the three mentioned above.

Thematically, Hotel Yeti-Way follows the same line of thought ELK used in Tropicool, plonking creatures in their opposite climate. Like ELK’s getaway themed slot, Hotel Yeti-Way uses humour and warm characters to ease players into its world before unleashing a roller coaster of thrills via high volatile, feature-filled gameplay.

Hotel Yeti-Way kindly shares its modifiers between both phases of play, mixing up the pace, preventing the base game from becoming a grind. Players also get a taste for what the modifiers can do before free spins launch, where they have to pick one for the duration. Not only do you choose your favoured features, but having some influence over volatility is always a welcome touch. Of course, free spins benefit from the addition of pay ways multipliers, where the real magic of Hotel Yeti-Way’s can be found. They can definitely be rewarding too, where all of those extra pay ways contribute to the game’s max win of 30,000 times the stake – another example of Play’n GO’s higher potential trajectory they’ve been on of late.

Yetis engaging in extreme sports might appear comical on the outside, but Hotel Yeti-Way is totally serious when it comes to things like maths and mechanics. It adds up to another slick Play’n GO release that delivers everything required for big, entertaining gaming.

A combination of comical theme and serious maths delivers all the big volatile, potential rewards you could ask for when taking on Hotel Yeti-Way.