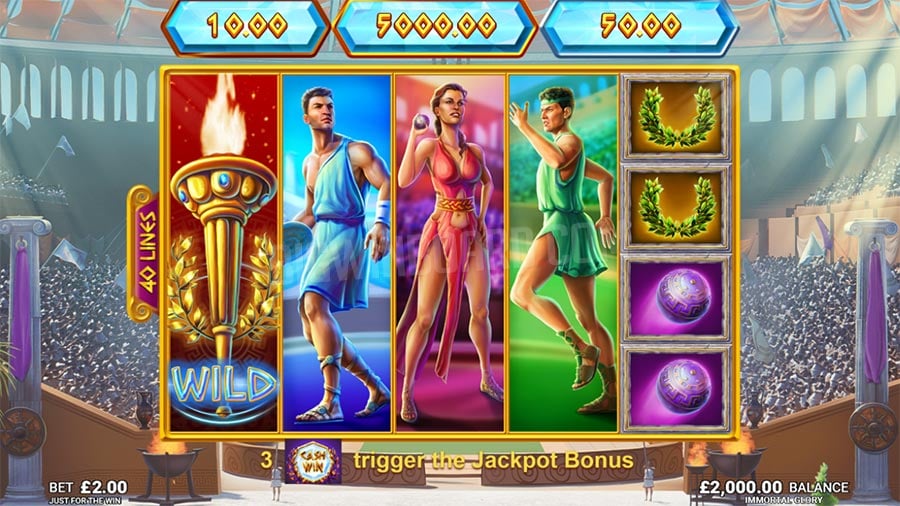 If there is one civilisation modern Europeans owe a significant cultural debt to it’s the Ancient Greeks. Then again, some say the contemporary lot are doing a fine job of cashing in on that debt now. But hey, let’s keep our hat out of the political arena and concentrate on the far more enjoyable task of reviewing Ancient Greek themed slot Immortal Glory from Microgaming partner Just For The Win.

For sports fans, the Ancient Greek’s greatest contribution is the Olympic Games which carry on in the modern era, larger than ever. Originally restricted to the Hellenic community, the modern games involve practically the whole world. Some sports enthusiasts are so enamoured; they’d even watch tiddlywinks if it were available. It is this competitive spirit that Immortal Glory seeks to tap into. The Olympic themed game takes players back to the glory days of Ancient Greece where players compete, ultimately, for a significant fixed jackpot.

Players step up to the starting line by selecting a bet from 10 p/c to £/€25 per spin in an event that is held in a spectacular old stadium, complete with dramatic music and plenty of cheering crowds. Players can cheer too, or at least golf clap, to a slightly above average RTP of 96.19%. You win or go home here, thanks to volatility JFTW has rated as very high, and it shows. The brutal volatility, combined with a hit rate of 21.6%, makes for quite a challenging competition.

Pay symbols are split into four low pay 1x1 sized tiles, and three 1x4 sized premiums. Word has it Ancient Greek athletes competed sans clothing, but there is none of that unwholesomeness around here. Instead, we get low pays represented by sandals, discuses, shot puts, and a winners wreath along with  three fully clothed athletes as the high pays – a discus thrower, a runner, and a shot putter. As mentioned, the premiums all appear 4 rows high, so they can cover full reels to produce full grid wins. The most valuable is a buxom female shot putter at 5 times the stake for 5 of a kind, or 200x for a full screen.

Wilds are worth the same the as the shot putt premium at 5 times the stake for a line of five. These flaming torch wilds only appear stacked four rows high to substitute for anything bar jackpot symbols.

Jackpots are king around here, but there are a few other features to look out for such as free spins and glory spins. Let’s begin with the game’s main attraction - the jackpot functionality. The steps for winning are simple in theory, practically much tougher, of course. It starts by landing bonus symbols which appear on reels 1, 3, and 5.

When 3 are in view, the reels cut to a new screen where players choose one of the three covered statues. There are three possible outcomes - Bronze, Silver, and Gold worth 20x, 100x, or a whopping 10,000 times your stake respectively.

Wild stacks are the key to free spins. When wilds stacks are fully or partially in view on the 1st reel and one other reel, then 5 free spins are awarded. During free spins, wild stacks become nudging wild stacks that stay on the reels but move down one position per spin until they vanish off the grid.

If at least one nudging wild stack is partially in view on the final spin then a Glory Spin is activated. Any nudging wild in full view disappears, while any partially in view are nudged to cover the full reel. Then, any wins which occur on the glory spin have a random multiplier of 2x, 3x, 5x, or 10x applied.

You have to dig pretty deep to find many other slots based on the Ancient Olympics. In that regard, good on Just For The Win for trying something different. Despite the unusual theme, Immortal Glory is all about the Gold Jackpot, little else. Still, max out a glory spin with a 10x multiplier and you could potentially win up to 2,000x. Though, like the real Olympics, no one remembers who came in second.

The base game can drag but is helped by stacked symbols, though payouts are balanced by their low values. Maybe we hit a rough patch during testing, but triggering free spins gained mythical status. After a considerable length of time, it felt like Just for the Win had added them to the paytable but forgot to put them in the game. When it finally happened, we had an insight into how Usain Bolt might have felt when he smashed the 100m world record. For the slots record, free spins typically turned out alright, but rarely did we manage to crack a glory spin. Like the rest of the game, free spins are a sideshow for the Gold Jackpot.

When you do get those three jackpot symbols then adrenaline levels spike. It feels so easy, just pick the one right choice out of three possibilities for an epic win, how hard can it be? Of course, life’s rarely so easy. One point of intrigue is the game’s statistical information was generated from over one trillion simulated spins. How many times the 10k jackpot was hit in that time would be interesting to know.

All up, Immortal Glory has its moments, and should be able to entertain those after a very highly volatile slot with a decent fixed jackpot, a few okay features in an unusual setting.

Immortal Glory is a well executed slot that revolves almost exclusively around winning its top jackpot, with little left over for second place contestants.