Demo play is not available in your region. Please visit one of the casinos listed below for free play.
Push Gaming

A Lord of the Rings inspired epic adventure is on offer in this colourful slot produced by Push Gaming. With a strong narrative, backed by a monumental soundtrack, players get to experience excellent graphics and thrilling features with potential for brag-worthy wins. Having won our Best Online Slot of 2018 award, the expectations are high when it comes to new Push Gaming creations!

Here, you will join the Immortal Guild in a heroic poem played on a 5x5, 1024 ways to win reel set, featuring collapsing game mechanics and multipliers. You can play this slot on all devices from between 0.25 to 100 EUR per spin, making it suitable for most gambling budgets. It's hard to say for sure where it stands in terms of volatility, though it does appear to be as volatile as most of the other popular slots on offer from Push Gaming such as Tiki Tumble or Fat Rabbit.

Flourishing forest territory serves as the setting for Immortal Guild. The cartoonish graphics that has become so characteristical for Push Gaming is as stunning as ever before. At the foot of a colossal tree, a humanoid face stares back at you in the background while leafs, illuminated by the radiating sun, gently floats in the breeze.

Push Gaming paytables are as straightforward as they come. Change your bet size and the value of the symbols is updated accordingly. Fantastic. Included in the game are 10 standard symbols and 2 special symbols. The 4 low-value symbols come in the form of stone, bronze, silver and gold coins while the premiums are represented by crossbows, wizard staffs and swords as well as the three members of the guild. The Warrior, being the most lucrative, will give you 6 times the stake for 5 of a kind.

In the base game, a Respin feature may come into play if two or more premium symbols land on top of each other. These symbols will combine into a special symbol, and a multiplier is applied based on the number of premiums that were combined. The special symbols will then cascade allowing new symbols to drop from above to replace any empty positions. For example, if you land 3 Warrior symbols on top of each other, they'll drop down and combine into a single symbol followed by a respin complete with a 3x multiplier upgrade.

Now, if matching symbols land on the existing special symbols, the multiplier is added and the Respin is retriggered. In a sense it's a bit similar to how Jammin' Jars works with its growing multipliers. As you can probably imagine, there is room for solid wins even in the base game.

7 free spins are on offer when you land 3 scatter symbols anywhere on the reels. For every scatter landing during the bonus, one free spin is added to your total. A new symbol comes into play here - the Lion Emblem symbol. It serves a wild and only appear as a result of two or more matching premium symbols landing on top of each other to form the special symbol. Just as in the base game, the symbols cascade downwards but turn into a wild rather than the standard special symbol, making it even more potent.

As the wild multiplier can grow seemingly without limit, Immortal Guild has the capacity to produce wins of up to 20,000 times your stake.

With plenty of potential in both the base game and bonus, Immortal Guild is an all around engaging slot that will keep you on your toes throughout the session. Visually, it is of excellent quality as is the rest of the production, from the maths right down to the soundtrack. We wouldn't say it's the most original Push Gaming slot as beneath the surface it's identical to Jammin' Jars, although the theme offers some variation.

Immortal Guild is an epic fantasy adventure from Push Gaming well worth a try. 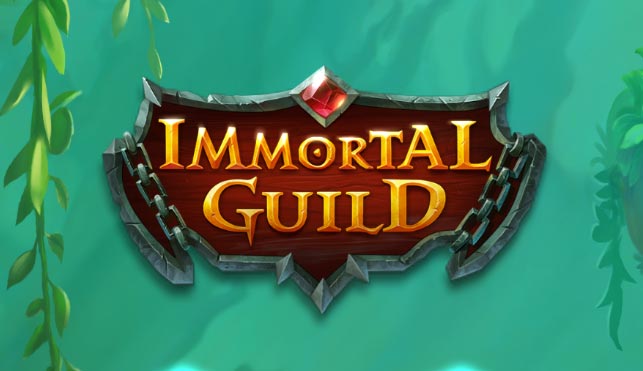