Where in the world have you been Thunderkick?

As far as we're concerned, Wild Heist at Peacock Mansion was a smash hit, and ever since its release we've been waiting patiently for new games from Thunderkick. Just before summer kicked in Thunderkick confused us with Yeti Battle of Greenhat Peak, a Christmassy low variance piece of garbage, then went into hiatus and completely disappeared.

For weeks and weeks, we bombarded the Thunderkick mailbox with desperate pleas in the hope of a sign of life but got nothing. While Thunderkick appeared to be sipping Sangrias and strolling around in the All Inclusive buffet, all other providers seemed busier than ever.

Jaguar Temple is a 5-reel, 3-row slot with 20 pay lines. Its math model is designed to give the casino a 3.9% edge over the players (96.1% RTP) which is considered good by today's standard. As with most Thunderkick slots, players have 14 fixed stakes to choose from, ranging from €0.10 all the way up to €100 for the high-rollers.

Key features include a bonus game with expanding wilds and a massive 3x3 Jaguar symbol. The innovation factor is relatively low with a setup and features we've seen in countless slots before - in fact, just weeks ago Microgaming released its own cat-related slot Exotic Cats, also featuring expanding wilds. How about that.

Visually, the game takes you to an Incan temple where the riches of the golden Jaguar awaits you. A sunset with twinkling stars stands as a backdrop for the game which has that distinct Thunderkick feel to it. Giant stone carved cat claws encase the reels with the symbols appearing on rocks as well.

On the reels, you will see low-value symbols in the form of clubs, hearts, diamonds and spades as well as five premium symbols represented by Incan birds, dogs, rabbits, fish, and golden jaguars - the latter being the most lucrative symbol giving you 50 times your bet for five across a pay line.

The jaguar appears typically as a regular 1x1 symbol, but it can also come in the shape of a 3x3 symbol with potential to cover all three middle reels. The jumbo jaguar symbol appears randomly in both the main game and the bonus, but more frequently in the bonus.

The wild symbol substitutes for all other symbols bar the scatter and is of great significance in the bonus as you will see.

Once inside the free spins game players will benefit from two things - expanding wilds and jumbo jaguar blocks appearing more frequently. The wilds are only found on the three middle reels in this slot, and when you land one in the free spins, it will expand to give you a full wild reel. You could potentially get 3 wild reels along with the jaguar symbol on the sides to land the max win of 1000x on a single spin. Interestingly, Jaguar Temple is capped at 2045x which is the maximum you can walk away with.

Jaguar Temple has all the ingredients and elements to become a hit slot, except for one crucial thing - the potential. While doing some research for the game we came across a site claiming the 2045x max win potential to be calculated per single spin, which is wrong, and something that would give it a theoretical max win potential of 80,000x should one trigger all 40 free spins.

It's confusing why a slot that has potential to pay out 1000x per single spin would be capped at 2045x (why that number?), especially considering the vast amount of free spins it could potentially award. Maybe Thunderkick themselves could comment, that would be helpful indeed.

As with all Thunderkick slots, it's smooth to play and well designed, both mechanically and visually. It allows for some high-speed stop spins, so beware should you would fall into tilt mode.

Jaguar Temple is a fairly well-balanced medium variance slot that is likely to entertain the housewives, and possibly the odd high-roller. Hardcore players, on the other hand, will struggle to stay motivated playing a slot with such low potential. 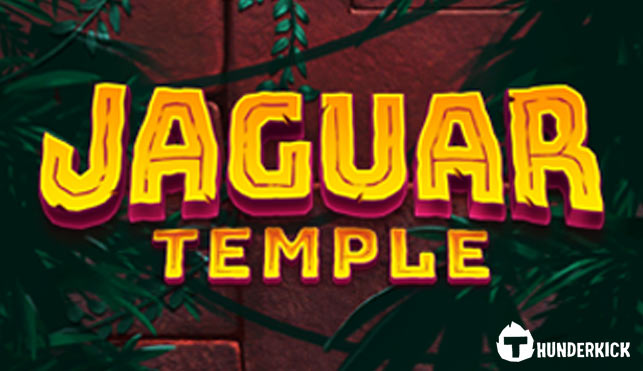