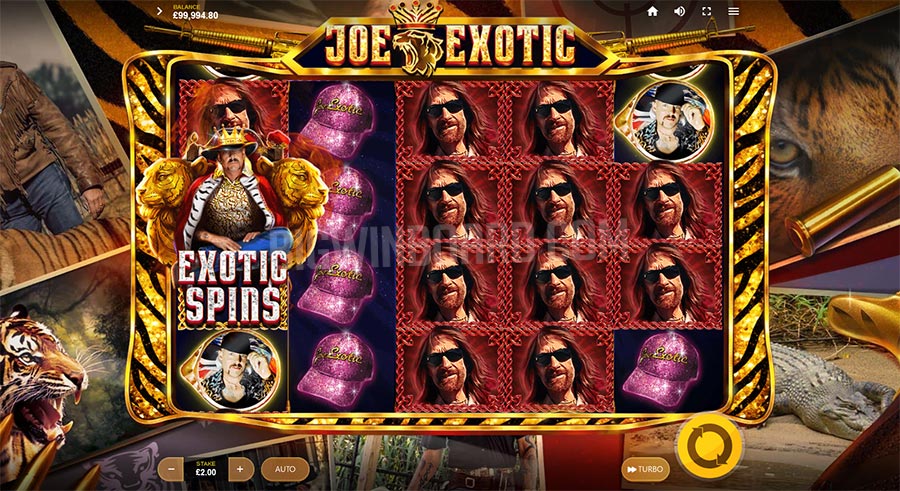 ‘Get insane, get paid‘ is the tagline for Red Tiger‘s exuberant branded slot, based on an infamously flamboyant exotic animal owner. The name Joseph Allen Maldonado-Passage né Schreibvogel might not mean much to you, but his professional name Joe Exotic might ring a larger bell. To call Joe Exotic a colourful character is an understatement. After working various jobs, Joe was a policeman before operating an exotic animal park in Oklahoma. In his time, he ran unsuccessfully for public office three times, including one as President of the United States in 2016. Contemplate him winning for a moment. Joe is currently serving a 22-year prison sentence for animal abuse and a ‘murder for hire’ attempt, covered in the popular Netflix series ‘Tiger King: Murder, Mayhem and Madness’, which propelled him into the spotlight.

With all that going on, it might seem strange to some Red Tiger has chosen such a controversial subject to theme their slot. No doubt someone at the studio did their due diligence and figured the benefits outweigh the negative press. Whatever the reasoning, Joe Exotic fans get a 5-reel, 20-payline grid matrix in one of the gaudiest designs you are ever going to come across. Mirroring Joe’s persona, the background is made up of exotic animal images, including crocodiles and tigers, though whether these are the ones Joe shot or not is not elucidated. A good ‘ole boy honky-tonk soundtrack accompanies the action, which is all guns, bullets, flames, tiger patterns, and sequins. Without a doubt, Joe Exotic has hit the reels.

Getting all up with the Tiger King is possible on any device, where bets from 10 p/c to £/€20 per spin may be set. Its medium to high volatility should suit a range of players, though it might not be fiery enough to match Joe’s temperament. The default RTP is a middling value of 95.7%, while the overall winning potential isn’t bad, yet nothing amazing either.

Wins hit in Joe Exotic when matching symbols land adjacently from the leftmost reel. 20 paylines have been provided, as have 9 regular pay symbols – all taken from the show. 4 are random icons like hip flasks, hats, belts, and a Joe token, while high pays are 5 characters who pop up at points in the story. Here you’ll bump into Eric Cowie, the lead zookeeper, James Garretson, Allen Glover, Jeff Lowes, and of course, Joe Exotic. Winning combination values vary from 2 to 20 times the total bet when made up of high pay character symbols.

Exotic Spins are Joe Exotic’s main event, while a couple of lesser features supplement them, such as a Dynamite feature, Tiger Bounty, and Election Time. Triggered randomly on any paid or free spin, the Dynamite feature blasts all low-paying symbols from the screen, letting high pay character symbols cascade down to fill the reels for a potential win evaluation.

The Tiger Bounty feature launches when Tiger Bounty symbols land on reel 1, 3, and 5. Joe presents an offer to Allen, who either rejects it or accepts it. Values grow from 5x to 15x, 25x, then 50x at the most. When Allen accepts the deal, players are awarded the amount.

Next, it’s your chance to vote in the Election Time feature, sort of. This one is activated when Vote Joe symbols land on reels 1, 3, and 5. Here players pick symbols to uncover candidates. Getting 3 of them awards 5x, 20x, 50x, or 150x the stake if it is James, Allen, Jeff, or Joe.

Lastly, 9 Exotic Spins are awarded when Exotic Spins scatters land on the first, third, and fifth reel. During free spins, the third reel is turned into a 1×3 Joe Exotic Super Multiplier Wild for the full duration, substituting for any pay symbol. Every time a win occurs, the multiplier on the wild increases by +1 up to 15x at the most and does not reset between spins. Should Exotic Spins symbols land on reels one and five, +5 additional free spins are won.

It’s a real left-field release this one, partly because Red Tiger doesn’t do branded slots much, and they’ve been rather bold in their choice of subject matter. Some players may doubt the wisdom of glorifying a man convicted of two counts of ‘attempted murder for hire’ of Big Cat Rescue CEO Carole Baskin, not to mention 17 charges of animal abuse, including nine violations of the Endangered Species Act. But hey, here we are. Red Tiger has nailed the vibe of the bizarre story, and even though Joe Exotic the slot was released in 2021, the game encapsulates much of the turbulent years of the Trump presidency, or at least, one extreme side of it.

As to the gaming side of things, lesser features trigger quite frequently to dish up minor wins in a colourful manner which keeps the game flowing. The Dynamite feature is limited by the number of pay lines and muted symbol values, so landing a full screen of Joe Exotic’s would be worth 200x the bet at best. Tiger Bounties never got past 15x during the view and were pretty low-key uneventful. The same applies to Election Time, though 150x for Joe wouldn’t be a disaster if it happened. That leaves Exotic Spins, where the game’s max win of 4,117x the bet is possible.

Looking past the controversial topic for a moment, as a game, Joe Exotic is okay, but nothing special. Like most branded slots, the slot might be fabulous if you’re into Joe’s playful side and are willing to overlook his less savoury antics. Otherwise, you might be wondering whether convicted criminals make the best slot themes.

Joe Exotic would be forgettable if not for its branded license. 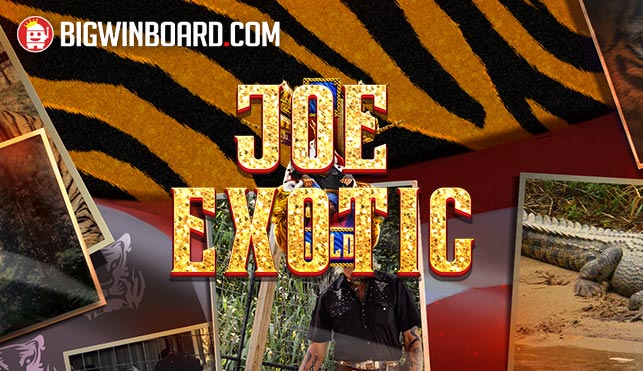