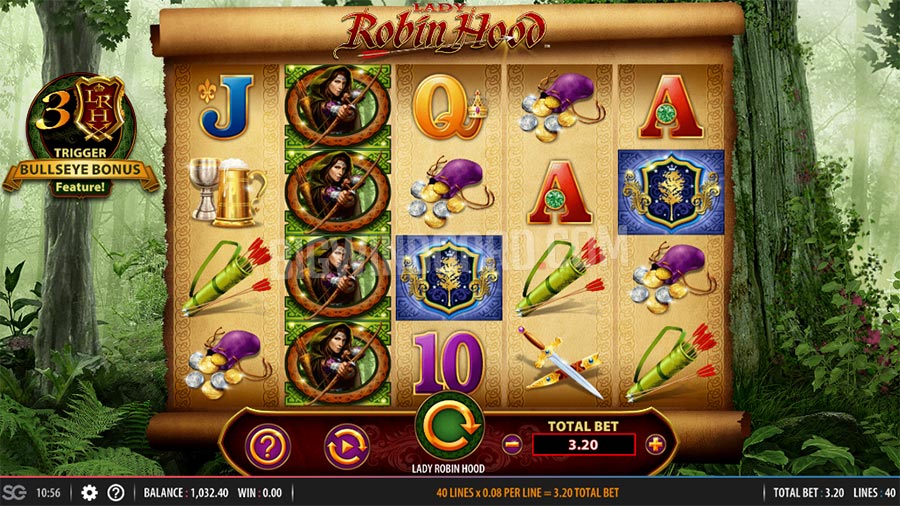 Bally is back with another game that has made the leap from physical machine to online slot. The game flips a classic chapter from British literature in an attempt to create something new. Robin Hood needs no introduction. He’s everyone’s favourite outlaw who robbed the rich and gave it to the poor. He’s popped up in countless books, movies, and cartoons since being first mentioned in the 14th century. Bally came up with the idea of portraying the hooded man as a woman. There are mixed feelings about the title. Was sticking the word Lady in front of Robin Hood a stroke of genius or laziness? Whatever, best not to judge books by their cover and all that. Top games often come with cheesy names, is Lady Robin Hood one of those?

Graphically, the online slot is more or less the same as the physical machine. For those not aware of its roots and with no emotional or sentimental connection to it will miss the point completely. For these players, Lady Robin Hood will just come across as another bland and dated looking game. There's nothing really exciting about it at all - the static background could just be whatever random wallpaper found while making a Google image search, the gameplay is rather slow and choppy and whilst the music is in line with the theme, it's nothing that will stick to mind.

Symbols sit on a 5x4 grid and are the same as those found in the physical version. The grid looks a bit old fashioned and is not as easy on the eyes as the rest of the visuals. Open up the paytable to reveal 10 base game pay symbols, 5 low (10-A) and 5 high. The high pays are all theme based and we get a bag of coins, cups, a dagger, a quiver of arrows, and the Lady Robin. She is the most valuable at 2.5 times the stake. Winners are comprised of three of a kind combos, except the top three symbols which only need 2 to payout a small amount.

When it comes to bet levels, Lady Robin Hood caters for the most humble inhabitant of Ye Olde England up to Sherriff of Nottingham level and everyone in between. Due to the 40 paylines, stakes start at 40 p/c, which could be too high for some low rollers, and go as astronomically high as £/€500 per spin. RTP is okay at 95.92% which is actually a few percentage points higher than the physical version is capable of. The low volatility is one of the key determinants of whether someone would want to play Lady Robin Hood. It keeps the game chugging along but never really getting anywhere, even with the extra features factored in.

Bally have armed Lady Robin Hood with a couple of features to help string together a few extra wins. The most common is the blue and gold heraldic symbol. This is the wild and can land anywhere to substitute for any of the base game pay symbols.

The next is the LRH logo which can have a greater impact on the game. This symbol is the scatter which appears on reels 1, 3 and 5. Land 3 and the game rewards you with 10 Free Spins and a payout of double the stake. When the free spins launch, the action shifts to another part of the forest, and the game display is altered. Four empty wild meters appear above reels 2-5 and a target with 5 coloured rings appears above the grid.

A new symbol also enters the game, the target symbol. Whenever a target symbol lands, an arrow is fired at the 5 ring target. Depending on which coloured ring the arrow hits it will fill in part of the associated wild meter. When a meter is filled, then the reel below it becomes a Stacked Wild for the remainder of the round. It is possible to land a bullseye with one of the arrows which automatically fills all wild meters and causes reels 2-5 to be covered in stacked wilds.

We could spend a lot of time critiquing Lady Robin Hood - that is, tearing it apart. Instead let’s just stick to a couple of key aspects to make our point. Fairs fair though, so for the sake of objectivity let’s first acknowledge that there are some positive moments. The free spins feature is pretty good. It’s a popular device that has shown up in other Bally slots in one form or another like Gaucho’s Gold and Hot Hot Habanero. The way that arrows can create locked reels of stacked wilds is nifty. It’s a shame the returns don’t do it any justice.

Potential has got to be one of LRH’s weakest parts. The rules state that total wins are capped at £250,000, but that's standard wording and likely only possible to hit whilst playing at max stake. For instance, a full grid of Lady Robin symbols (with the help of wild reels or not) will reward players the not so princely sum of 100 times the stake. Even at max potential 'what if' theorising, getting a full grid on every free spin means you are still looking at just 1,000x the stake.

The low volatility means exciting moments in Lady Robin Hood are few and far between already. Combine that with such pitiful potential, and you can’t help but wonder what the point is. In fact, it is hard to think of a single reason to play LRH unless you're just looking to re-live those days spent at the arcades.

With its low volatility and awful potential, Lady Robin Hood is aimed squarely at the casual gamer who is happy to camp out in their patch of a casino and watch a bankroll slowly evaporate. Robin Hood was all about robbing the rich and giving it to the poor, but when it comes to LRH who is robbing who here? 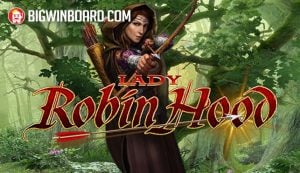