Inspired Gaming is the team behind this latest fruit themed slot which is powered by SG Digital. Every time a new one of these is released, it’s hard not to wonder exactly why. Still, developers are a clever bunch, with endless features and bonus opportunities at their fingertips to entertain a jaded community who has seen it all. Sadly, that’s not the case with Mega Cherry. The emphasis here is on speed and simplicity. By shunning much in the way of extras, the spins come hard and fast. If you’re in the market for a pacey fruit slot that might pique some interest. Be warned though; Mega Cherry can be a trying experience. Yes, technically players can get ahead with Mega Cherry, but it will test their patience and resolve to the hilt. Up for a challenge? Let’s see if Mega Cherry fits the bill.

Inspired has gone for retro fruit over a modern look and the layout is a basic - 5 reels, 3 rows, and 10 fixed paylines carry the action and are set against a plain blue background. The exception is the soundtrack which sounds like it came straight from a Café Del Mar best of year compilation. Stake menu sits on the left and bets start at 10 p/c per spin and can be raised as high as £/€60. The game can be played on virtually any device regardless of screen size, and spins come in manual or auto mode. Hit the little gear button on the top right to open up the paytable which is light on details - not because Inspired is economising on content, but because there isn’t a whole lot you need to know.

First up are the symbols - oranges, plums, watermelons, grapes, blackberries, and strawberries make up the lower end of the table. Then there are blue, red, and white lucky sevens which are worth 100 times the stake for five of a kind. The other pay symbols are white cherries which come with a credit amount on them. During the base game, they form winning combinations, but the credit amount comes into play during the bonus game. The highest paying symbol is the Logo which pays out 200 times the stake for five across a full payline. All five of a kinds offer quite good value; the issue is that even four of a kind is very rare, even of the lowly fruit. RTP is above average on 96.5%, and the official volatility rating is low (according to SG Digital). Though with the mega runs of dead spins interspersed with the odd poor win the volatility feels a lot higher than that. The math model must be an absolute beast.

Don’t come to Mega Cherry if you are looking for a feature-heavy slot. The two extras included here are unlikely to satisfy that requirement. Either way, the main event is the Cash Collector Bonus - 6 white cherry symbols need to land in conjunction with the Bonus symbol to trigger the Cash Collector Bonus and 5 free spins. The cherry symbols used to launch the feature are locked on the reels while every other position is spun. The only symbols that can land are more cherry symbols, blank spaces, or golden coins. Any new cherry symbols are locked in place for the remainder of the feature. If a golden coin lands, it turns the cherry symbols red and gold. This means that at the end of the free spins, their credit values are added together and paid out along with any win line combinations.

Running out of cash? The Spin Chance feature is your second chance of a comeback. It's triggered automatically if your balance is reduced below the current stake, yet is still greater than zero. It essentially offers you an opportunity to wager the remaining balance in an attempt at winning an additional spin at the current stake.

Rumour has it that Zen monks play this game to test their patience. All jokes aside, Mega Cherry is one tough slot that puts in no effort to make friends. It is possible to come out positive with Mega Cherry, but you will need to wade through an unbelievable amount of dead spins to get there. Strike this game on an off day, and you’ll have the pleasure of watching your account evaporate slowly but steadily before your very eyes. If the action was entertaining, you could just shrug your shoulders and write that off as a bad day and better luck next time. The sad reality is that you are just watching fruit spin endlessly while this thing eats away at your bankroll.

So who is Mega Cherry’s target audience? Diehard fruit fans, ex-kamikaze pilots, people who vote tax cuts for billionaires? Seriously, this thing can be tough. Even the soundtrack, which was so soothing in the beginning starts to drive you up the wall and force the mute button. Then it’s just you, some dead spinning symbols, and the odd bleep when reels stop spinning. Oh, and your sanity eking out of your physical form until all that’s left is a husk repeatedly hitting spin in the hopes of getting somewhere, anywhere. Low volatile games should be a lot more gentle than this. If you can stick it out and land the Cash Collector Bonus, you might get lucky and win your money back. The best you can hope for is a 12 or so cherry symbols during the bonus round. A 50 credit showed up once so technically 12 of those and a golden coin could net you 600 times the stake.

It’s just not enough to compensate for the racked nerves. Players who are hanging out for fruit flavoured slot would be better off spinning something like Joker Troupe, or sticking to their old favourites. Even if Cherry Mega was less stingy with the wins, its repetitive gameplay and limited features quickly get boring. Next.

Mega Cherry manages to be both tedious and unattractive at the same time, all bundled up in a clichéd fruit slot wrapper. 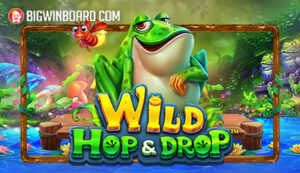