Megaways Jack is the second slot from Iron Dog Studio after Pirate Kingdom Megaways to use Big Time Gaming’s ubiquitous game engine. The first wasn’t a bad debut, a little unadventurous perhaps, but with a decent bonus game capable of dishing out spectacular wins (as has been proven since its release). If you liked that one, then you will probably appreciate Megaways Jack as well because Iron Dog has recycled many of the features. The final product is a reasonably good looking game that lets players relive their youth via the fairy tale theme and setting. For the real degenerates, on the other hand, it might bring back memories of spinning the reels to NetEnt’s iconic Jack and the Beanstalk slot.

It’s not all fantasy land though, one of Megaways Jack’s selling points is a huge potential that can make wading through its treacly sweet landscape worth the trouble. Like its predecessor, Megaways Jack uses the 6 reel Megaways template with 2-7 symbols possible on each. However, there is no horizontal bonus reel across the top, but the game still takes advantage of the full 117,649 win ways possible.

Helping bring Jack’s story to life, the background uses images from the tale such as his house, which doesn’t look poor at all, and of course, the beanstalk weaving its way to the clouds on the right. A dreamy soundtrack completes the scene as you spin its reels. As ever, this begins with bet selection by hitting the coins icon. Stakes can be selected as low as 20 p/c per spin or moved up to £/€20 at the most. Manual or auto-spins are available via the neat wee UI Iron Dog has designed to minimise space and let the reels use most of the screen.

All this space leaves plenty of room for the big, bold symbols to do their thing. Initially, this means a cascade feature. Here, chain reactions of wins are made possible due to winning symbols exploding off the reels to let new ones cascade into the gaps for more chances. This is handy during the base game as ever, and boosted during the features as we’ll see. The symbols themselves have been well designed and have a jolly fairy tale look to them. That includes the low 9-A royals, but more so the high pays which are the cow, the golden goose, jacks mum, the giant and jack as the premium symbol who pays 25 times the stake for six of a kind. He also only needs 2 of a kind to payout while all others need at least 3. The last regular symbol is the wild which appears on reels 2, 3, 4, 5 and 6 during base and bonus games. As per usual, it can substitute for any other regular symbol.

Some things have stayed the same, some things have changed since Pirate Kingdom. The default RTP hasn’t budged an inch and remains 96.20%. This, however, changes when the bonus buy is activated to between 95.79% – 96.12%. Players who prefer a rougher ride to the smooth sailing of Pirate Kingdom will appreciate the extra volatility Iron Dog has squeezed in which pushes Megaways Jack firmly into ‘high’ territory.

Like the mechanics, some features have been changed, some not. One glaringly obvious addition is the magic harp that hangs on the left side of the reels. In the base game, the harp can randomly award:

Those magic beans also play a part during the base game. Up to 3 can appear on tumbles, and each bean adds 1-3 positions to the beanstalk. The beanstalk lights up a leaf with each cascade (or with features), and 8 or more positions trigger free spins like so:

Free Spins come with an unlimited win multiplier that increases by +1 with each cascade and starts at x1 unless stated above. Another feature to make the shift from Pirate Kingdom Megaways is when 7 symbols land on a reel, that reel is locked 7 rows high for the duration. Also, four consecutive tumbles award +2 free spins, and every tumble over 4 adds one more free spin up to a maximum of 4. During free spins, the harp still sings out and can award up to 4 more wilds on tumbles, or up to 4 free spins, or up to x3 added to the unlimited win multiplier.

The last extra, where available, is the Bonus Buy option. Players can select between 6-10 free spins with or without a locked reel already in place. Prices vary between options from 30x the bet up to 130x with all the bells and whistles.

In some ways Megaways Jack is more or less a fairy tale version of Pirates Kingdom since beneath the gloss, the two slots are quite similar. They aren’t all out clones though, as the extra features and more volatile math model see to. But in essence, if you liked one, there is a good chance the other will appeal as well. The graphical standard is comparable, though Megaways Jack looks slightly more refined and easy on the eyes (in our opinion at least). The best part is that those surface improvements have seeped through the veneer to grease the machinery behind the scenes.

Before fairy tales were watered down and neutered in an attempt to keep modern kids pure, the originals had a darker underside. The same is true of Megaways Jack. It might look cheerful on the outside, but lurking beneath the surface is a highly volatile math model that can stomp like a giant’s boot, or lay golden eggs, depending on its mood.

Almost every aspect of Megaways Jack has been dialled up since Pirates Kingdom. That means not just a more volatile game, but more features and far greater potential. Where the pirates squabbled over treasure in the region of 10,000x, Megaways Jack has more than doubled that for wins up to 25,000 times the stake. We are talking actual golden goose laying abilities here.

As it is, Megaways Jack feels more like a step sideways rather than a step up from Pirates Kingdom. It’s not a bad game by any stretch, but as a Megaways slot it doesn’t stand out as very original which might bore parts of the audience rather quickly. Its high volatility and huge potential, however, certainly overshadows any aversion you might have to spinning fairy tale characters for sure. 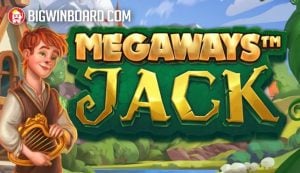