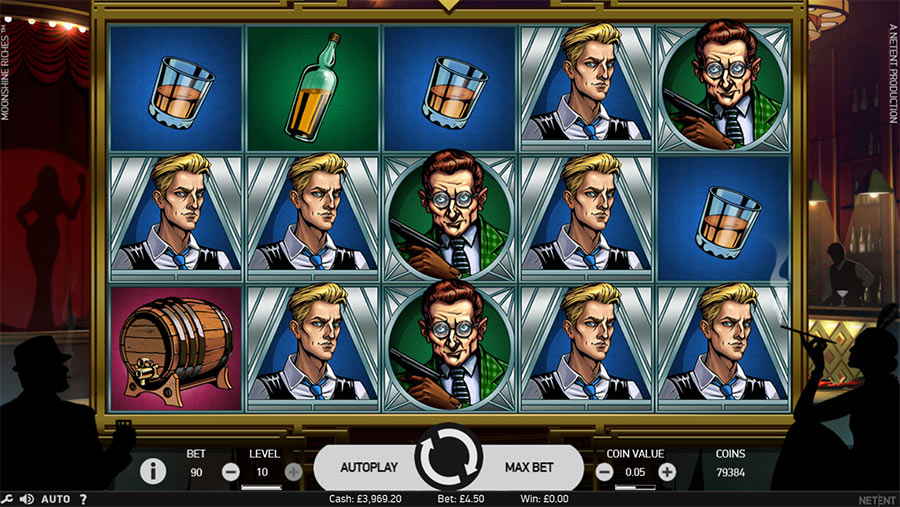 Moonshine Riches is no revolutionary new slot that's going to bring back NetEnt to the glory of the past. Nevertheless, it's a new NetEnt slot and as such it still deserves a proper review so let's go. Moonshine Riches is an exclusive release only available on selected casinos. NetEnt, and many other providers do this from time to time and usually it involves slapping on a new theme on an old game. When we fired up the game, our first thought was that it was going to be a straight clone of NetEnt's Wild Wild West, but turns out it's not. In fact, the bonus game is unique to this game and something we've not seen before.

Set in a 1920 jazz club with swinging jazz music and comic book style visuals, Moonshine Riches is a 5-reel, 3-row slot with 9 paylines, 96.6% RTP and a bet size ranging from €0.09 - €45. Moonshine Riches comes with 8 regular symbols represented by whiskey glasses, whiskey bottles, ale barrels and 5 characters of which the mob boss guy is the most valuable, returning a 38x win for 5 across a payline. As the symbols appear stacked 3 symbols high, it's possible to land a full-screen top symbol in the main game which has a max win of 350x. There's also a wild symbol in the main game that only appears on the 3 middle reels, as well as 2 moonshine bonus symbols that only appear on reels 1 and 5.

This feature is restricted to the main game. When landing the 2 moonshine Bonus symbols on different rows, the Ricochet Reward is activated. When this happens, one randomly chosen bonus symbol transforms all the other symbols in the row it landed on into a random regular symbol. In short - you're awarded a 5 of a kind win.

Just your average picking bonus awarding a random coin win of between x10 and x75 times the stake. Nothing to see here.

The Territory Takeover spins is the main attraction and the only good reason to play this game. It is triggered when the 2 moonshine bonus symbols appear on the same row on reels 1 and 5. Players are then awarded 5 free spins which are played out on a 5-reel, 1-row reel set paying both ways. Every wild landing on the reels are sticky and remains in place until the end of the bonus game as well as adding an additional spin. Furthermore, there is a 1x multiplier increase with every spin which can reach a maximum 9x multiplier. With a wild line in place and a 9x multiplier, the spin is worth 350 times the stake.

Moonshine Riches is a low to medium variance slot and as such, one we're not overly excited about. It's not a horrible game and far from the worst NetEnt release this year, it's just that, as gamblers, we feel no pulse spinning the reels knowing the low potential. Then again, it's likely not aimed at the hardcore slot player and instead caters more to the recreational player.