Sir Arthur Conan Doyle’s famous detective Sherlock Holmes is a fictional character who pops up regularly in various entertainment forms. Books obviously, but also movies, TV, plus of course, slots. And why not, who doesn’t love a good old Victorian/Edwardian era romp through London’s mean streets, especially when he’s on the tail of his nemesis Professor James Moriarty? This is exactly where we catch up with the detective in iSoftBet’s flagship slot Moriarty Megaways.

Surprisingly, Moriarty wasn’t a hugely central figure in the original Holmes novels, appearing in just two of them. Nowadays, since a hero always needs an arch-enemy; Moriarty’s profile has grown to play a more prominent role in later adaptations. A good example is Andrew Scott acting the baddy to a devious tee in a recent BBC series, who always seemed one step ahead of our deerstalker wearing, pipe-smoking hero.

Fortunately, the super sleuth had Dr Watson assisting where he could, and the pair team up to great effect in iSoftBet’s Moriarty Megaways. Not only do the two leads add a bunch of charisma, but they also star in their own features. Backgrounding it all is an atmospheric representation of Baker Street, London, around the turn of the 20th century. Big Ben might be a little out of place in that part of town, but ah well, such is creative license. iSoftbet has a real knack for crafting impressive visuals when they put their top team to work, and Moriarty Megaways is up there with the best of them. Moriarty himself deserves mention. He is one sharp dressed uber-villain. Modern baddies might be able to pull off bigger heists these days, yet few if any can rock a full beard and top hat like this dastardly debonair chap.

Payable on any device, Moriarty Megaways offers stakes starting at 20 p/c, rising to £/€20 at the upper end, signaling it's a high potential slot due to the relatively low max stake. At the time of writing, official stats were not available, but like other iSoftbet Megaways games, expect RTP to be around the 96% mark while volatility is expected to be fairly high. Busting up crime, in a gentlemanly manner, takes place on a Megaways powered slot, consisting of 6 main reels holding up between 2 to 7 symbols each, as well as a top tracker reel holding 4 symbols. The exact number alters on every spin, so you never know quite what you are going to get next. This includes the number of ways to win too, which can be as high as 117,649 in the base game, extending further to 352,947 during the bonus. The premise may be rather typical for a Megaways slot, but just as effective.

The symbols are a nice mix of character themed based objects. It starts with 10 to Aces card royals as the low pays followed by more valuable chess pieces, a signet ring, and Jim Moriarty at the top of the board. Landing 6 of a kind premiums are worth payouts of 2 to 50 times your stake. All symbols require at least three to payout, except Moriarty, he will do so on two or more. The bad guy’s pocket watch is wild, substituting for any of the pay symbols to complete a winning combination. It appears on reels 2, 3, 4 or 5, on the top tracker.

Joining Holmes on this adventure is the voice of reason, Dr Watson. This time around he plays a starring role, getting his own features - Watson Reels plus Watson Mystery Symbols. As well as these, players get Sherlock Reels, Sherlock Max Megaways, Free Spins, cascades, and a progressive multiplier.

Typical of most Megaways slots, cascades are triggered after every win, removing winning symbols from the reels. New ones drop into the gaps, making consecutive combinations possible. Cascades continue until no more wins appear.

Although there is potential for some decent hits in the base game, Moriarty is all about the free spins which are triggered when 3 or more bonus symbols are in view. This awards 15 free spins, plus 5 more for each extra scatter on the reels – up to 30. To begin with, free spins come with a standard progressive win multiplier that starts at x1, increasing by one following every cascade. Extending the round happens when 3 scatters land on the top tracker reel, awarding five free spins.

Moreover, during the feature, the layout of the screen changes, reducing the main grid size while adding two counters at the bottom of the screen, one for Watson, one for Holmes. Whenever a Holmes or Watson symbol lands, their counter reduces by one. When 3 are collected, the respective counter turns into a mini slot with a specific feature in play;

Depending on location, players may have access to a bonus buy feature called a Moriarty Bet. For the cost of 150x the stake, at least 3 scatters land on the next spin, triggering the feature.

When iSoftBet put their mind to it they can really design some gorgeous Megaways games, and Moriarty Megaways is a prime example. It fits the Twisted Tales series like a glove, not to mention being a real hoot to play. Taken on their own, the features in Moriarty Megaways might not exactly be new. However, when combined with the fab looks and theme use, the whole becomes much more than the sum of its individual parts. Moriarty Megaways is a game that goes to show you don’t necessarily have to come up with something revolutionary to be highly entertaining.

What is new are the way Sherlock and Watson Reels are triggered during free spins. Some may argue having them take place on their own little grids below the main one is a little redundant, not to mention tiny on mobile devices. Yet in practice, everything has been arranged neatly, so the feature adds a lot more than it takes away. Especially appreciated is the way wins on the smaller grids cascade and improve the multiplier when wins hit. Get them firing, and Moriarty Megaways is capable of producing wins of 37,500 times your stake.

Taken as a whole, Moriarty Megaways is a great addition to the Twisted Tales series. The graphics are superb, building a great environment to track down Moriarty in while trying your luck. iSoftBet once again makes the most of what Megaways has to offer, the result being one of the better Holmes slots out there. 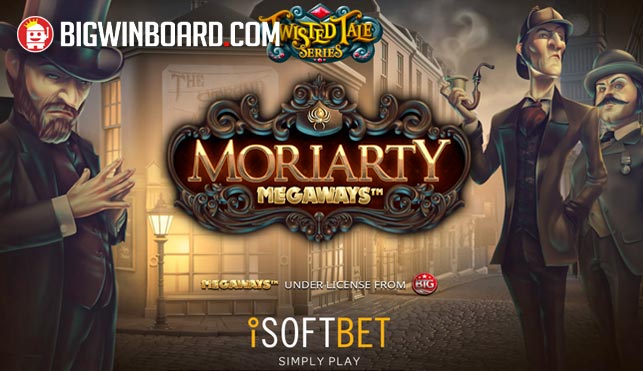