Neptune, or Poseidon depending on which ancient belief you adhere to, plays host to this Just For The Win / Microgaming collaboration titled Neptune's Riches Ocean of Wilds. The underwater god's domain pops up on a fairly regular basis to host slots, and Neptune's Riches comes across as one of the more uninspiring looking – at first at least. There doesn't seem to be many riches lying around. Actually, there doesn't seem to be much of anything lying around. Giving it a chance reveals a rather high-performance slot though.

First impressions aren't the greatest. Firing up the slot reveals a classic 5-reel, 20-payline grid surrounded by seawater, with a smattering of weeds and ruins made out in the murk. Graphically there's little wow factor, which is unusual since Just For The Win slots are usually quite strong visually. This time around, it almost seems as though they held back in that area to concentrate on features instead. Players hoping to experience the rich and colorful sea-life of the Mediterranean will have to settle for the dying Baltic sea instead, or something along those lines.

Players can brave the depths on desktop, tablet, or smartphone devices, by selecting bets from 10 p/c to £/€10 per spin. Neptune's Riches has the sort of feature/math model combination which can blow its stack to produce big wins, but can also bob around like driftwood when it wants. In saying that, a hit rate of around 1 in 4 spins acts like a lifebuoy to keep you afloat. The high volatility, however, might not be casual friendly, but an RTP of 96.15% balances things out to an extent.

The paytable consists of nine regular symbols, a stack of wilds, and a trident scatter. Pay symbols include four J-A royals, as well as rings, seahorses, bracelets, crowns, and Neptune coins as the high pays. At least three of a kind is needed for all but the coin which needs just two to form a winner. As to values, 5 premiums on a line are worth payouts of 2.5x to 15x the stake.

Upping the run rate are several types of wild symbols. No matter the form, all wilds substitute regular pays to make a winner, and are worth the same as the Neptune coin on their own. Players also bump into several wild multipliers during the features.

With a name like Ocean of Wilds you'd expect quite the haul of wilds, and to be fair, Neptune does serve up a few. They appear in a variety of forms, with multipliers, alongside respins, and in stacks during the triggered round of free spins.

Above the middle three rows you'll see three locks. Landing wild keys on reels 2, 3, and 4 unlocks them, triggering the Rising Wilds Respin feature in the process. Once activated, each of the middle three reels now displays a multiplier which is applied to any Multiplier Wild beneath it. Before each respin, wilds on those reels move one position up rather than spin out.

When the wilds vanish off the top, the respective multiplier increases by +1 up to a maximum of x10. Key to big wins is that two or more Multiplier Wilds on a win line have their values multiplied. Technically, it is possible to have three x10 multipliers in play equating to a massive x1,000 multiplier. The respin feature remains in play until there are no more Multiplier Wilds present after the reels have stopped.

Neptune's trident isn't just for a spot of spearfishing, but is also the scatter symbol - 3 in view on reels 1, 3, and 5 trigger 5 free spins. This bonus game begins with a Walking Wild Stack present on the last reel. The stack contains three individual wilds, each one displaying a multiplier from x1 to x10. After each spin, the stack moves one reel to the left. If a new multiplier wild lands next to the stack, its value is added to the adjacent wild multiplier on it.

When the Walking Wild Stack makes it to reel 1, players spin a 10 segment reel. The first time this occurs 9 of the segments award 5 free spins, while 1 segment collects the winnings, ending the feature. The second time the wheel is triggered, there are 5 free spin segments + 5 collects. From the third time onwards, players get 1 free spins segment, while the rest are collects.

Neptune's Riches continues Just For The Win's trend of releasing highly volatile, high reward slots. This time around, potential wins of up to 25,000 times the stake are up for grabs. Big numbers to be sure, but it won't be for everyone. Several things detract from the experience, influencing whether players will attempt to crack Neptune's Riches' substantial rewards.

For a god-filled slot, or any slot really, the graphics aren't exactly awe-inspiring. Of course, appearance isn't everything, yet the plain looks fail to excite. When combined with the bubbling underworld sounds, the effect is akin to lying on an inflatable lilo, as waves gently sway you to and fro. Relaxing to be sure, but hardly an adrenaline rush.

Thankfully, it's not all laid back basking in the sun. Wilds, respins, and multipliers are on hand to provide thrills, and hopefully, build up some solid wins. Features tended to trigger quite frequently during testing too, rarely leading to big wins, though often enough to interrupt the monotony of staring at a dull blue screen. That included a few free spins rounds as well as Wild Respins.

Still, the high potential might provide enough of a motivator for many on its own. Action heats up when multipliers build, plus the way they multiply each other can get exciting. The sheer number of wild multipliers and the way they act offers something a little different overall. If you're after big wins alongside high volatility and don't mind the low sensorial effects, Neptune's Riches Ocean of Wilds could be worth a look.

Beneath the drab appearance is a highly volatile slot full of multiplying wilds, capped by significant winning potential. 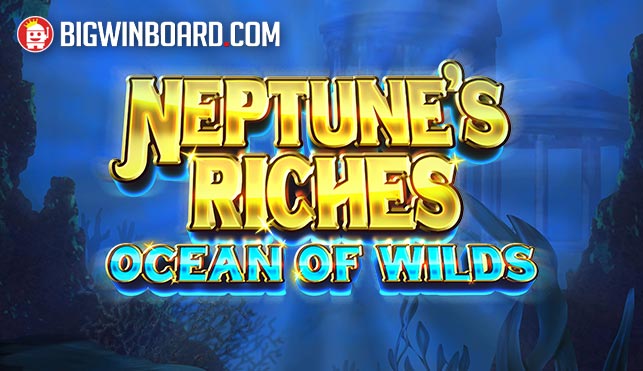