It's been a while since Play’n GO dived beneath the waves, the last was possibly Sea Hunter, a relatively simple 3x3 affair that loosely shares some of the same features as Octopus Treasure. Instead of cannons, players use keys to unlock treasure chests and receive help from a giant cephalopod.

The great big beast is always on your mind while you play too. He sits, bobbing away, behind the transparent 5-reel, 20-payline grid, occasionally wrapping a tentacle or two around to meddle in the game. There is a lot of stuff on screen to take in. At first, Octopus Treasure looks like an exceptionally crowded section of coral reef full of weird flora and sea life – or the Great Pacific Garbage Patch. Take your pick; it's rather cluttered either way. Capping the odyssey is an equally mysterious backing track. Overall, the look is okay, it does the job, but it's not quite Play’n GO's finest.

When it comes to the math model, players should expect the same reliable stats which usually accompany Play’n GO slots. First up is RTP, measuring 96.25% on the default setting. Be aware the figure can be lowered depending on the individual operators' settings, so something to look out for. Volatility is medium, while potential is the standard Play’n GO figure. There was no official hit rate available during testing (as there never is with this provider), but wins appeared on reasonable basis, interspersed by the four in-game modifiers which didn't add up to much a lot of the time.

Octopus Treasure can be classed as pretty straight forward gaming, offering bets from 20 p/c to £/€100. Eight regular symbols make up the paytable, divided into low and high pay groups. Low pays consist of card suits, (spades, diamonds, clubs, hearts), while the high pays are pots, coins, a jug, and a crown symbol. Values aren't amazing, a line of five premiums is worth from 2 to 3.5 times the stake, for example. You'll get slightly better returns of 5 times the bet when five wilds line up. The coral-covered wild also substitutes for all symbols except the scatter.

On the ocean floor, rich stuff is found in one place – treasure chests. The same idea applies to Octopus Treasure where the features revolve around collecting keys to unlock chests in all phases of the game.

On any spin, a key symbol may appear on the third reel. When it does, the octopus reaches around, grabs it and unlocks the chest sitting on top of the reels. When the chest pops open, it awards one of 4 reel modifiers:

As an extra sweetener, after any feature there is a chance a multiplier is applied to any win. This can be a value of x2, x3, x5, or x10.

The game hits top gear when 3 pearl scatters land on reels 1, 3, and 5 to activate Key Respins. During this feature, only the key symbols appear on the reels. They aren't worth anything but are collected instead. The number of keys collected translates to the number of awarded Treasure Spins, from 5 at the least to 10 at the most.

During Treasure Spins each spin plays one of the four bonus features mentioned above. Also, whenever a key symbol lands, it adds an extra spin to the remaining amount. On a positive note, there is no limit to how many Treasure Spins may be won.

It kind of feels like Play’n GO phoned this one in. Octopus Treasure is all pretty stock standard stuff really, with little to get thrilled about. Like fishing, a good game needs a hook to reel you in, and either Play’n GO forgot to use one, or failed to bait up. The game jigs around, doing its thing, but there's not a lot to make you hold on tight for the ride. We know Play’n GO has a busy schedule of releases which can be a good or bad thing. Good, in that when slinging enough mud, eventually some of it sticks. Bad, because you inevitably end up crafting a few place holder slots.

Aside from a general lack of excitement, there are a few niggles that further detract from the experience. Base game feature animations can take up a bit of your time, and when they result in a minuscule win, they can be frustrating. Not to mention they take longer for free spins to appear as it seems. Once you do trigger Treasure Spins, then you've got to deal with them on every spin. Of course, it could work out, maybe the game feels generous and doles out a random x10 multiplier for your troubles. Keep in mind 5,000 times your stake is up for grabs here like many other Play’n GO titles.

Don't get the idea Octopus Treasure is a terrible game. It's just not one of Play’n GO's best moments. And who knows? Octo-philes or Kraken fanatics looking for a tentacled hit might be well chuffed with another seawater slot to spin.

Play’n GO cross another slot off their busy list which is competent enough, but fails to make much of an impression. 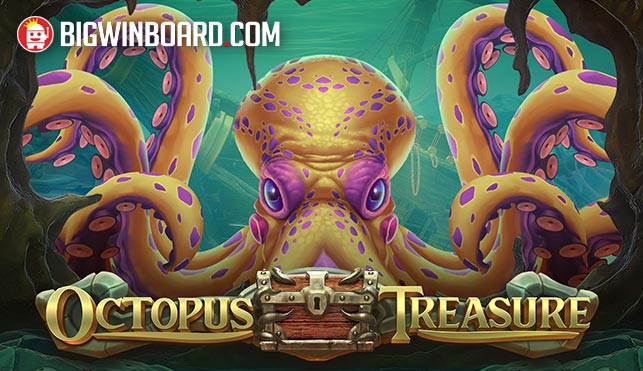