Pragmatic Play is a developer with plenty of wind in its sails, lining up one strong title after another as of recent. Going by first impression, Pirate Gold certainly seems to be no exception to the rule. Though we're a bit sick of the pirate-theme, Pirate Gold stands out as an ambitious undertaking that has all the right ingredients to qualify as a blockbuster slot. Characterised by breathtaking graphics, pomp and splendour, it comes with plenty of features that include the Lucky Treasure Bag feature, fixed Jackpots as well as a Free Spins feature with extra wilds.

Pirate Gold is a 5-reel, 4-row slot with 40 fixed paylines that can be played across all devices from 0.40 to 200 Eur per spin. The volatility is high here, coming in at 5 out of 5 on Pragmatic's scale, something that, in combination with the relatively high minimum stake, might make it unsuitable to some players.

Visually, it's undoubtedly one of the more interesting looking slots we've seen in a while. There's a mix of photorealism and cartoon-style graphics going on here that comes together quite well. Set in a misty harbour and with ships docked on each side of the reel set, in the backdrop you'll see the motion of the waves, a stunning sunset and mountains in the distant horizon. The actual reels are set inside a wooden frame with an info bar at the very top and the fixed jackpot prizes displayed just below. Pay attention to the lanterns swaying gently in the wind - when the scene transitions to the stormy naval battlefield in the free spins, the lanterns remain unaffected, swinging just as smoothly as before. Not a big deal, but noticeable.

Looking at the paytable you'll find a total of 10 standard symbols. They include bronze, silver and gold coins, a hook hand, a telescope, a treasure map, a ship and a parrot. The most rewarding symbols are the male and female pirates, both giving you 12.5 times your stake if you land 5 of a kind. On your side you have the chest wild as well, replacing all symbols bar the scatter. Note, however, that the wild is absent from reel 1.

There are 2 features included in the game. The Lucky Treasure Bag feature, which is essentially a streak respin feature, activates if 8 or more money bags hit simultaneously on the same spin. The money bags from the spin that triggered the feature become locked in place as 3 respins are played. During the respins, you'll only see blanks, additional money bags, multiplier bags or respin chest symbols.

Now, if you land a money bag, the respins counter resets to 3. If you land a retrigger symbol, a new Lucky Treasure Bag round is awarded and played after the first round has been finished with the starting money symbols grid left the same as the initial round. There's also a multiplier money bag symbol that can carry a multiplier of 2x, 3x, or 5x. When it hits, the multiplier is added to the total multiplier of the round. When the respin feature is completed, all the cash awards are added together along with the total multiplier to further boost your winnings.

This is not just your standard bonus feature which in many slots often works as a "filler" to keep players entertained in-between free spins. It comes with a max win of 32,270 times your stake, so no need to sigh when it activates. Furthermore, there are 3 fixed Jackpots on offer in this feature - Minor (50x), Major (200x) and the Grand Jackpot which gives you 1000 times your stake if you fill all 20 positions with money bags.

There's a Free Spins feature as well that activates when you land 3 compass scatters simultaneously anywhere on the reels. Starting with 10 free spins, here you'll benefit from extra wilds as both the male and female pirates become wilds if they appear on all but the first reel. It's also possible to retrigger the feature by landing 3 scatters. There is no limits to how many times it can retrigger. The Lucky Treasure Bag feature applies here as well, so there's plenty of action to look forward to.

Many a good men have had their balances looted on the pirate-infested waters throughout the years of online gambling and joining this band of buccaneers on the ultra high variance adventure that Pirate Gold is, will undoubtedly put you at risk yet again. However, with lady luck on yer side and with the swing of the sword you could very well end up with a substantial loot of your own as there is a 32,000+ times your stake potential on offer.

What is there not to like about this Pragmatic offering - the excellent graphics, massive potential and entertaining features, it all comes together quite well here to bring you plenty of thrill and excitement.

Pirate Gold is an all-around decent slot, but nothing really more than that. 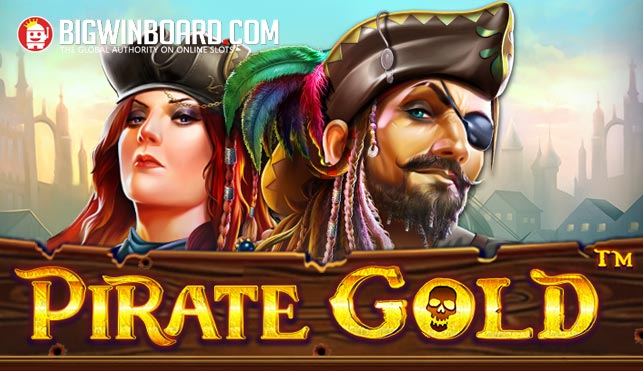