Ahoy, avast, or a-whatever is needed to kick off a pirate-themed slot titled Pirate Pays Megaways from developer Big Time Gaming. Most players are no doubt aware of how popular this theme is, so being a BTG product, there was a measure of intrigue over what the studio would do with it. Turns out, not as much as you might expect regarding both the theme treatment and the features which are recognisable from other games. Still, Pirate Pays can come together to produce spectacular results, so let's get a bit salty, a bit sunburnt, do a bit of plundering, maybe woo a governor or two as we look for fortune on the Spanish Main.

We presume it's the Spanish Main. While there's nothing in the docs explicitly saying this is where Pirate Pays Megaways is set, that's where European privateering famously occurred, so let's run with it. The view that greets players is classically Caribbean, where a 6 + 1 reel set sits against a boat as it ploughs through a blue sea, framed by a sunny skied, island filled environment. It's not instantly very piraty, and to be honest, it never really gets so. However, the view is bright, so there's every reason to remain positive about the upcoming journey. 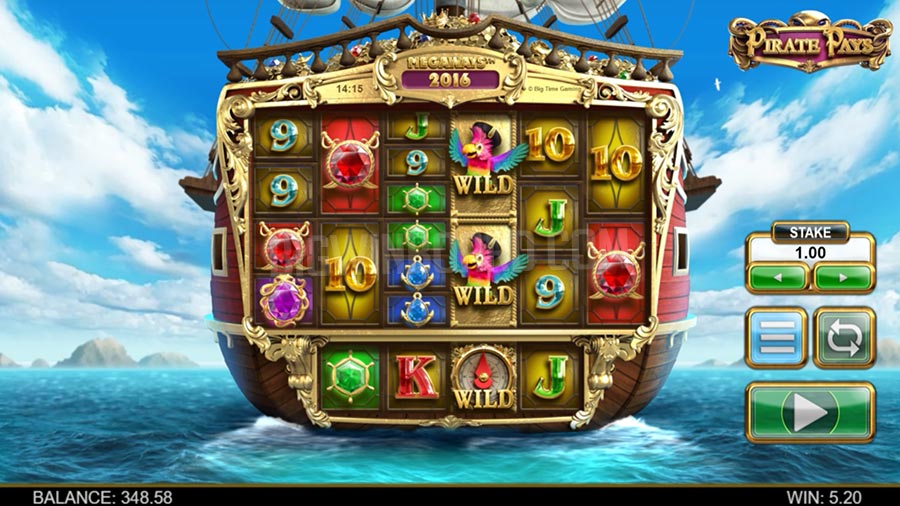 On each spin, up to 7 symbols may land on the 6 reels of the main grid, while 4 appear on the extra horizontal reel. This means the number of Megaways alters on each spin as well, from 324 to 117,649. Moving on to the maths, we find a highly volatile game, producing a solid theoretical return value of 96.23%. Players can fire up Pirate Pays Megaways on any device by setting stakes from 20 p/c to £/€20 spin. Not a wide range of choices for the deep-pocketed crowd, yet potential is huge, as we'll get to in a while.

The symbols used here have a nautical touch without being overly piraty – from low to high are 9-A card royals, followed by four jewels decorated with gold wheels, anchors, swords, and Krakens. Should a winning combination made up of 6 high pays land, players collect wins worth 0.7 to 25 times their stake.

Features in Pirate Pays Megaways aren't exactly new, despite renaming exercise and revolve around reactions, wild compasses, plus a Kraken Bonus Round.

Each winning combination triggers the reaction mechanic, which removes winning symbols from the grid and fills the spaces with new symbols. If this creates another combination, the reaction process repeats, ending when no new win hits.

Appearing only on the 4-position lower reel is the wild compass symbol. When it lands, the compass needle spins to reveal a direction of North, South, East, or West. Like in Cash Compass from Hacksaw Gaming, all positions in the needle direction are transformed into wild bird symbols. Wilds substitute for all symbols except scatters.

If you've ever played Deal or No Deal, then you'll know the drill as the pre-bonus game is designed in roughly the same manner. For the Kraken Bonus Round, 20 different prize outcomes are shown on the screen, with one outcome removed for each triggering scatter over 3. Each of these outcomes displays a starting win multiplier and a number of free spins. Next, canons remove up to 5 outcomes. Then, the Kraken gives players a free spins offer they can accept or reject. If rejected, canons continue to remove outcomes until a free spin offer is accepted or only two outcomes remain. When there are just two left, players open one of two chests to be awarded an outcome and free spins begin.

If the Enhanced Bonus Round was triggered, you go through the same process, but the lowest 10 outcomes are removed from the list at the start of the procedure.

In free spins, the awarded win multiplier increases by +1 after every reaction without limit. The Megascatter symbol does not appear on the bonus game; however, regular scatters may land on the bottom reel - landing 3 or 4 scatters awards an additional +5 or +10 free spins, respectively.

Well, it's good, without being exceptional, and since Pirate Pays Megaways is from BTG, it's hard not to expect more from them. The theme is about as common as it gets, which is fine, but BTG hasn't really made it their own. Basically, players stare at the back of a boat the whole time, which doesn't offer much piratically speaking. Not even one skull & crossbones in sight which gives it a bit of a generic look. This could be a Spanish galleon carting silver back to King Philip II or a Dutch fluyt sailing out of Curacao. It just doesn't feel like a tub of cutthroats ready to do anything to get rich quick, so don't pick Pirate Pays Megaways if you're after some anything goes buccaneering spirit.

However, do consider Pirate Pays if you're after a sturdy Megaways game offering regular core features with one or two side additions. Of the additions, compass wilds were often quite useful in linking a greater number of symbols together. However, the main feature, the Kraken Bonus Round, has a distinct Deal or No Deal ring to it. It's almost exactly the same, actually, which was surprising as it wasn't like Big Time Gaming to so obviously borrow someone else's idea. The similarities go right down to accepting or rejecting the bankers; sorry, Kraken's offers. Like DOND, offers can be easy to reject while bigger prizes remain on the board. Most of the time in testing, the outcome almost always resulted in a better than x1 starting multiplier, though the number of free spins won varied greatly. Sometimes it worked out advantageously, other times not so much, meaning The Kraken Bonus can be as intense as a full-blown DOND round.

What may heighten Pirate Pays Megaways' appeal for many players is its winning potential. The base game offers a fair amount of booty at 15,500x the bet, though nothing compared to the Kraken Bonus Round, where 104,400x is possible. Worth noting is that the max win is uncapped, so there is a chance it could get even higher.

All up, Pirate Pays Megaways is as reliable as you could want from Big Time Gaming. It's got a respectable RTP, massive potential, and runs silky smooth. The features aren't as inventive as they might have been, and the pirate theme is light, but if you're after a massive game, there's unlikely to be many regrets about boarding this boat.

With just a bit more effort, Pirate Pays Megaways could have been outstanding but it’s still absolutely worth playing being as reliable as you could want from Big Time Gaming. 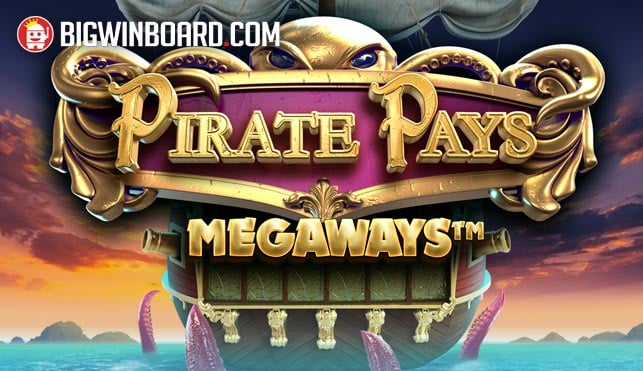