Ah, the old sandstone blocks, and plain old sand of Ancient Egypt, we meet again. The developers' go-to historical era returns to theme another slot titled Pyramid Pays from iSoftBet. This repeat theme performance is never an issue if the studio does something cool, interesting, or new with it. Then there's no problem; bring it on. When a game struggles to meet the aforementioned criteria, it makes it hard to get excited, much less find the motivation to power through a review. Being ever-optimistic, though, let's trek in and see what we can uncover.

Pyramid Pays is played on a 5x3, 243 pay ways game grid located in the always exotic world of Ancient Egypt. In laying the scene, iSoftBet has decorated the view with Pharaoh Statues, sparkling turquoise water, and bet multipliers on pyramids off in the distance. What you actually see depends on the sort of device you use. Whatever your preferred selection, Pyramid Pays is pretty generic however you view it. The same goes for the stock Egypt backing track accompanying the gaming, as well as the plain white reels, which give the game a classic touch - maybe that's the point of Pyramid Pays. 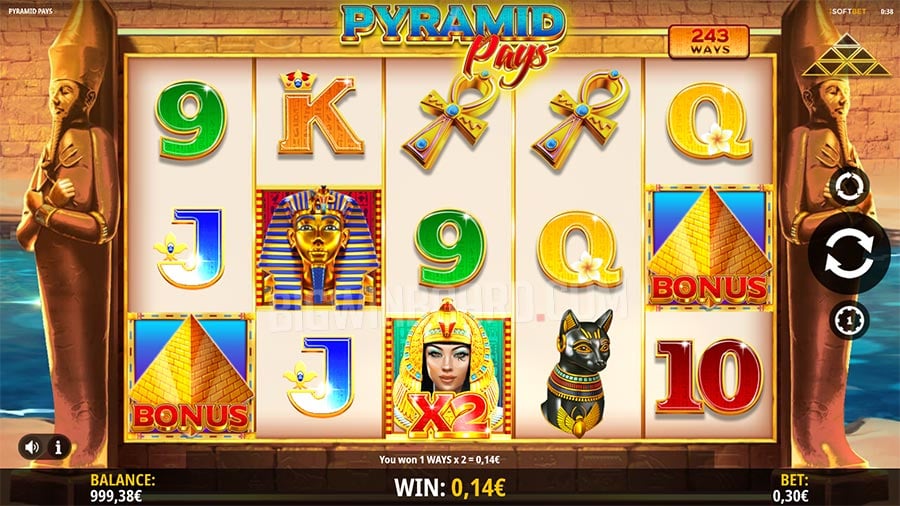 Playable on desktop, mobile, or tablet, Pyramid Pays allows players to set stakes as low as 30 p/c or as high as £/€30 per spin. Medium/high volatile, there are no special features found in the base game apart from a multiplying wild, which can turn into a bit of a drag after a while. Free spins took their sweet time to trigger, or maybe they didn't, and it just felt like it since nothing else was really going on. The game more or less evens out in the end, as Pyramid Pays has a theoretical return value of 96%, putting it squarely average.

Wins are awarded for landing adjacent matching symbols left to right, starting from the leftmost reel. Appearing in the game are some retro-looking tiles, starting with 9-A card icons, followed by Ankhs, scarabs, Eyes of Horus, cat statues, and pharaohs. At least three of a kind is needed to pay out in all cases, and they have an old slot look to them as if the game was ported from a physical cabinet. As to values, landing a combination of five premium symbols is worth a payout of 0.83 to 1.5 times the stake. A Cleopatra looking lady appears on the wild symbol, which lands on reels 2, 3, or 4, and only one can land per spin. Wilds substitute for any pay symbol and multiply any win they are part of by x2.

When the Pyramid Pays feature is activated, the action shifts from the reels to a pyramid covered in 9 multiplier prizes, from x2 to x100. One multiplier is randomly selected, and players win a prize equal to their stake multiplied by this value. Awarded multiplier values are then disabled, so they may not be won the next time the feature is triggered. Pyramid Pays can be triggered multiple times during free spins, and up to 9 prizes can be won.

A final point is that if the Pyramid Pays feature is triggered with a Booster Scatter on the last reel, all prizes on the Pyramid are doubled for the remainder of the bonus round.

We know iSoftBet is more than capable of turning out a great looking game stuffed with innovative features. Pyramid Pays is evidence the studio is also just as adept at ramming out placeholder titles for the game rack. There just weren't any 'wow, this is good' moments during the review. It looks plain, sounds average, took a freaking dynasty or two to finally trigger the bonus game, and once activated, failed to impress. Okay, it didn't take that long; it just felt like it due to the lack of action during the main game.

Since there's nothing notable about the base game, let's head straight to the bonus round. First, you get 15 free spins when it triggers, which is a decent amount. Another thing that's not so bad is it's easier to land three scatters, thereby triggering the Pyramid Pays Feature than you might suspect. It's probably why you only get one extra spin for doing so. The prize round can be alright, and the top prize got up to 400x at most during testing. We never managed to score the top reward, but it's not hard to see the values doubling up to something decent.

And yet, it feels like we are really digging hard to find something nice to say about Pyramid Pays. It does nothing to raise the quality level of the iSoftBet line-up, and the studio can do so much more. Pyramid Pays' problem is there are so many Egyptian slots out there, including plenty of epic ones the game is in danger of being completely drowned out and swept away by its competitors. The Pyramid Pays feature has moments, and it's bound to thrill the socks off someone somewhere, but there's nothing going on with the rest of the game to push it past the level of mediocre.

Pyramid Pays is bound to thrill the socks off someone somewhere, but there’s nothing going on to really push it past the level of mediocre.