✅ Play Queen of Riches Megaways on

When you think of rich and powerful queens of the past, who do you think of? Perhaps Queen Catherine of Russia? Maybe Isabella of Spain? Well, there’s a certainty that perhaps they can claim such a title. But none could compare to Cleopatra of Ancient Egypt - the country’s last official active ruler. Cleopatra was known not only as a beautiful and powerful ruler, but for her relationships with Julius Caesar and Marcus Antonius of Rome. Naturally, these alliances with Rome brought masses of riches her way and allowed her to live a life of certain luxury. While Cleopatra proceeded to commit suicide by poisoning at the age of 39, her legacy will doubtless continue to live on, even within the reels of this Big Time Gaming Slot.

Queen of Riches utilises a layout that is made up of 6 reels that will generate between 2 and 7 symbols on each reel on every spin to give you a maximum of 117,649 ways to win – which is quite the standard for Megaways slots. Based on NetEnt's iconic Twin Spin slot, there's no free spins game to benefit from but the mechanics at play here can lead to massive wins nonetheless.

Big Time Gaming is one of those brands that is known for creating online slots with solid graphics. Queen of Riches is no different in this respect, utilising some impressive high-definition imagery throughout the game. The background will drop you right into the ancient Egyptian setting, thanks to the hieroglyph-covered walls and dog statues on display. Then, you’ll be able to see the first symbols upon the reels, which are of the playing card additions. These run from the aqua-coloured 9 through to the purple A. Then comes the green-coloured eye of Horus symbol, which can multiply your wager by up to 3 times your stake. Then comes a symbol of a scarab beetle, followed by a red phoenix rising from the ashes. Finally, the symbol of the pyramid marks this slot’s highest paying addition, offering up 50 times your stake for a six of a kind combination.

Full Reel Wilds have come into view in several of this developer’s creations, and they’re present once again in Queen of Riches. Naturally, Cleopatra herself is who provides this symbol to the game, and she is able to cover the entirety of the reel that she shows up on. Her wild status will allow her to substitute for all other standard symbols on the reels. It can count as up to seven icons and it will also multiply the pay-out by up to 7x when participating in a winning combination. Multiple Full Reel Wilds in the same winning combination will proceed to multiply each other to give you a multiplier of up to 49x. Something else to remember about these symbols is that they can only appear on reels 2 through to 6.

At the core of the game is the Reel Clone feature. This is something that actually takes place on each and every spin, but it’s a completely random outcome every time. Basically, it can produce between 2-6 identical reels, which is basically the clone part of things. To add to this, Full Reel Wilds can also be cloned, allowing you to really benefit from several of these coming into view on cloned reels. The Reel Clone Feature can really help to boost your win balance and the key to winning big here considering that the same icons will be in view on all cloned reels, so it’s certainly one to watch out for and appreciate.

Although most Big Time Gaming slots are known to offer outstanding potential, Queen of Riches' track record is maybe the most impressive. At the time of writing, it's the only Big Time Gaming slot with confirmed wins of up to 20,000x. While the proven potential is impressive enough, it's even more exciting knowing that such wins have surfaced on several occasions within the casino community.

It's not a game for everyone though. Since there is no free spins feature to trigger, some find it to be a bit monotonous to play. It's also quite volatile which means you're likely to see a lot of dead spins or low payouts. Most sessions will obviously result in nothing. For thrill seekers, however, few slots can get the heart racing the way Queen of Riches can. Knowing that you could potentially walk away with a life-changing win when those synchronized reels eventually come to a stop is enough to keep many hardcore gamers coming back for another round.

Queen of Riches captures all of the good points of NetEnt’s Twin Spin slot while making several improvements. 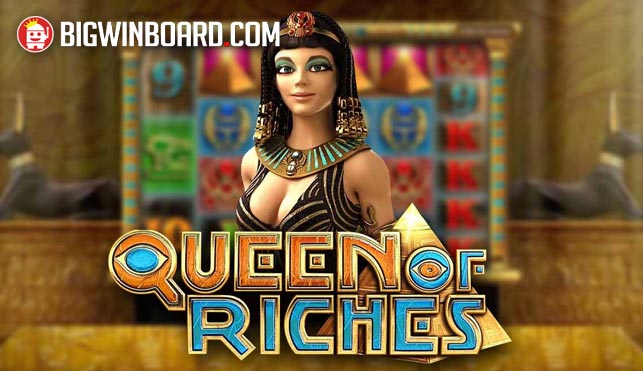