Go bush in a Rambo branded slot that offers okay gameplay, but could be any generic action-themed slot at all. 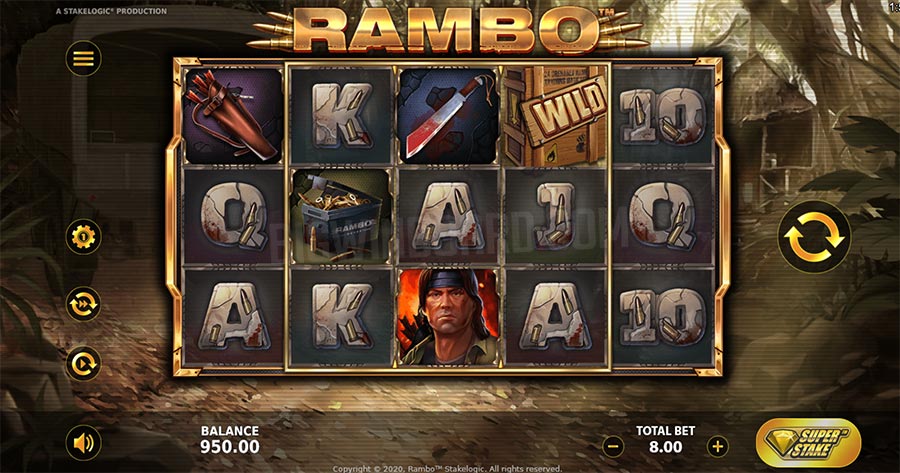 We’re going to go out on a limb here and say someone at Stakelogic is a real Sylvester Stallone fan. As well as two Expendables slots starring the Italian Stallion, they’ve also released a Rambo themed slot. If there is one traumatised Vietnam vet you don’t want to mess with it, it’s the ever shirtless, brooding John Rambo. The guy who only wanted to be left alone, but could still be counted on to help against baddies anywhere.

Rambo is a super successful franchise that spawned comics, books, a tv series, video games, as well as movies – including a Bollywood version. Heck, this isn't even his first appearance in the online gaming world. Now we have another round of John Rambo blowing things up on the reels, thanks to a partnership between Stakelogic and media brand rights entity Skyrocket Entertainment. Let’s see what’s left after the dust clears.

Stakelogic’s Rambo is a 5 reel, 20 payline mission set in deep bush in an unknown location. Knowing John’s heritage, its possibly Vietnam, or South America? Kind of irrelevant in the grand scheme of things, but a fitting location all the same. The accompanying soundtrack is pretty cool too, providing tension as if you’re creeping cautiously through enemy filled territory. The overall background has a certain cinematic quality, though the reels have the cartoonish/Rockstar Games inspired look the Expendables New Mission slots has.

Selecting bets presents a slight conundrum thanks to the inclusion of Stakelogic’s Super Stake option. Standard bets range from 20 p/c up to £/€100 per spin – double if you decide to activate the Super Stake, the benefits of which we cover below. The math model involved here is one of medium to high volatility along with a default RTP of 96.08%. There is a 94.08% version as well, so it can be a good idea to check the paytable.

When it comes to symbols, the first question might very well be “who’s the new guy?” Sorry, but the Rambo premium symbol bears little resemblance to the real man. It’s like Stakelogic was creating a generic action hero game and got a call to switch to a Rambo slot, yet decided to leave the symbols as they were. Okay, he’s rocking a headband, plus you can sort of see make out the pout, but still, Rambo?

Anyway, ‘Rambo’ is worth an impressive 100x the stake for a line of five. He also only needs two on a line to payout, whereas the rest of the symbols require at least three. The rest we speak of include, in descending order, an ammo box, a grenade, arrows, a machete (bloodied), and A-10 royals, covered in bullets. The final symbol in this section is the standard wild which is worth the same as the Rambo symbol and can substitute for all symbols except scatters.

Features are where it’s at, naturally, starting with Stakelogic’s trademarked Super Stake betting option. Activating this doubles the stake to unlock extra wilds and add explosive wilds to reels 2-4. Also, 2 scatters symbols are added to reels 1 and 2. If 2-4 scatters land in this mode, then Super Stake Respins are awarded until 5 scatters appear, or no new scatters land.

Beware the hooded cobra about to strike, except not here, since it is the scatter and the key to the bonus game. Landing 3, 4, or 5 of the snakes awards 10, 20, or 50 free spins respectively. Strangely, other than them being free, not much new occurs during free spins except for the chance of landing multiplier wilds - which doesn't seem to happen very often.

Multiplier wilds substitute as normal while adding a multiplier of x2, x3, or x4 to the mix. Having more than one multiplier wild in view has their multipliers added together. Moreover, free spins can be retriggered under the same conditions as set out above.

Lastly, it goes without saying that Stakelogic has rammed on a gamble feature. This is a standard blind card guess to potentially double, quadruple, or nothing your bet for picking the correct colour or suit of a card.

‘I'm your worst nightmare’, is one of John Rambo’s more memorable lines from a bunch of movies not exactly known for their dialogue. Thankfully, Rambo the slot isn’t your worst nightmare, yet it doesn’t exactly raise the roof either. It sits in a comfortable middle ground, where it’s capable of entertainment, but it’s not overly memorable either. As a branded slot, it's likely to attract some attention, but it's hardly a game that players will return to repeatedly for a bashing.

The key to good times is scoring Sly symbols in concurrence with wild multipliers during the free spins. It’s funny, the very first spin of testing produced five scatters and the associated 50 free spins, a great start for sure. Then literally nothing happened until a bunch of Rambos showed up at the same time as a stack of wild multipliers for pretty decent results. The game never quite reached the same heights for the rest of the session but showed Rambo can turn it on, to a degree, when it wants. Fully loaded, Rambo’s potential can probably hit up to a few thousand times the bet, although no official word on potential was available during time of writing.

Rambo, on the whole, proved entertaining enough. However, there’s something that prevents it from being really good. It’s tough to nail down; perhaps it’s because the game feels a little too generic and not all that Rambo-ish. Take a look at older Rambo slots from developers like Skywind Group or iSoftBet who captured the spirit better.