Thunderkick's release schedule is one of the more inconsistent. Sometimes we don't hear anything in months, and other times we get a couple of games in quick succession. Merely a month has passed since we published our review of Dragon Horn, and as it turns out, Thunderkick has decided to keep us in the fantasy world. Instead of mythical dragons, however, we head north to explore the supernatural powers of the mysterious druid and her magic raven.

In this 5-reel, 30-payline slot, which you can play from 10 cents to 100€ per spin across all devices, you will come across Raven Mystery Symbols where you'll see these symbol transform into other symbols for enhanced winning combinations. In the Bonus Game, collecting Raven Orbs will turn lower value symbols into Mystery Symbols as you progress through the levels, leading to potentially bigger payouts.

Set in an enchanted forest with the reels encased within an old crypt, you'll hear birds chirping and a calm, yet electrifying soundtrack playing in the background. Though largely just a wallpaper, there are some dynamic elements in the backdrop where you'll see fireflies floating around peacefully, as well as vines swaying gently in the breeze. While it all comes together nicely, it's not quite as vivid and colourful as Thunderkick slots often tend to be, even if there is some improvement in the bonus scenery where you get to perceive the game with the ultraviolet sensitivity of a bird's vision.

Raven's Eye comes with a set of 10 regular symbols. These are made up of the usual A, K, Q, J and 10 royal values, followed by a representation of the 4 elements of nature, namely air, earth, fire and water. The most lucrative, however, is the druid woman who will give you 12.5 times your stake if you land 5 of a kind. There's a wild symbol included in the package as well which replaces all symbols except the scatter. The wild offers the same payouts as the druid woman.

In the main game, it's mainly about the Raven Mystery Symbols feature. When the raven symbol, which appears stacked on the reels, lands on the reels, it will transform to a random symbol, including the wild. Being a medium variance slot, winning combinations of around 1-7 times your stake are quite frequent, but you need the bonus for more substantial payouts. This is triggered when you get Raven Mystery symbols on 3 or more reels.

The number of free spins granted during the Bonus Game is relative to the number of Raven Mystery symbols present when triggered with the minimum being 9 spins. The objective here is to collect Raven Orbs in order to fill the symbol meters. As you fill the meter, lower-value symbols are successively transformed into mystery symbols, while also giving you 3 additional spins every time the meter is filled. If you managed to unlock all levels, you will play your remaining spins with only high paying symbols and mystery symbols on the reels. This should, in theory, significantly increase your odds of landing the top payout of 375 times your stake per single spin.

Generally speaking, we have a soft spot for Thunderkick. When it comes to visuals, innovation and maths, the studio usually maintains a high level of quality, delivering intense and entertaining slots. Raven's Eye, however, feels like a rushed release that fails to showcase the potential of Thunderkick's creative team. The game feels basic, both visually and in gameplay, and the payouts are, frankly speaking, dreadful.

Moreover, the game seems to have been put together with bits and pieces from other Thunderkick slots. For example, even if there's a bit of a twist to the mystery symbol feature in Raven's Eye, it's something we've already seen come to better use in other Thunderkick slots such as Flame Busters and, just recently, Dragon Horn. We can also see elements of Pink Elephants in the way the level-up bonus game has been designed. It's not necessarily a deal-breaker, but experienced players might feel it's getting a bit old.

If you want to feel the thrill of knowing you could land a win to potentially fund a vacation for two on a luxury resort in the Bahamas, this is definitely not your slot. If, on the other hand, you're just looking for something to unwind your mind and to keep you entertained for a while, Raven's Eye might very well satisfy your needs. 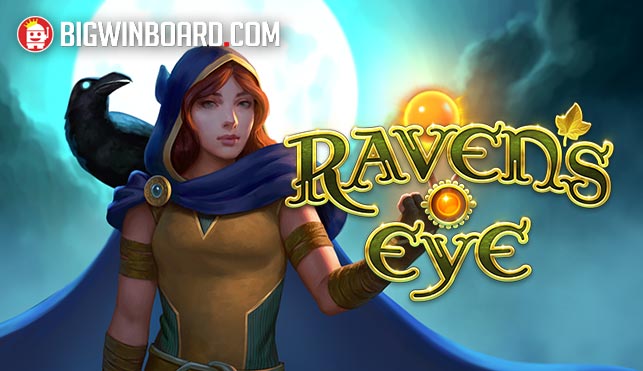