Retro Galaxy takes points from other Microgaming slots and hangs them in the balance. 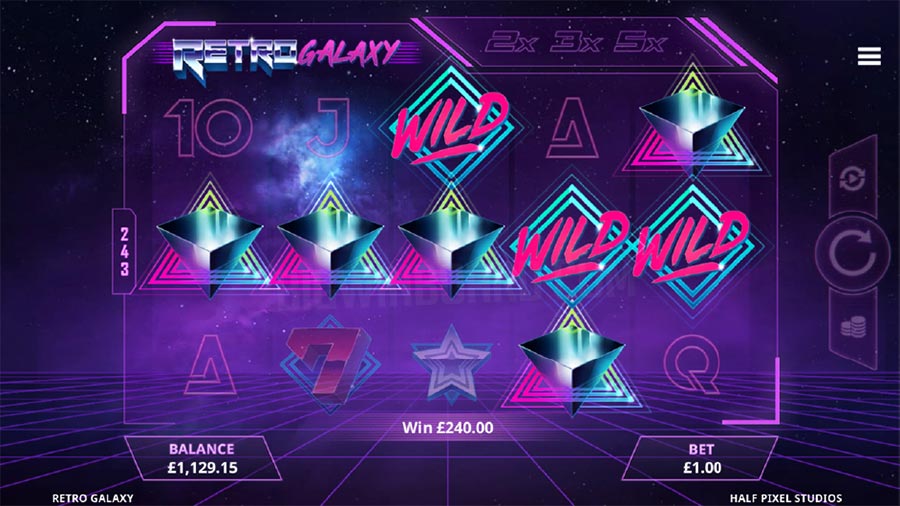 Where to play the Retro Galaxy slot

Get all nostalgic in Retro Galaxy, a neon-filled slot from Microgaming partner Half Pixel Studios. Half Pixel is one of these smaller outfits with a minimal online footprint - not even a website to delve into. If you have a little Google, it’s not the web designer in Albuquerque or the computer network company in Bratislava of the same name. For now, they remain a mystery, with just their work to judge them by.

If Retro Galaxy is anything to go by, Half Pixel is a studio with a passion for the past. Not only does Retro Galaxy combine futuristic elements with an 80s look, which is quite popular at the moment, but the game is full of classic Microgaming features of yesteryear.

Visually, the action takes place above a horizontal grid-like surface, stretching to the horizon where a galactic cluster can be viewed. The reels are transparent, so more of the view can be seen, and bordered by a sort of fighter pilot HUD. An 80s inspired Synthwave track accompanies the visuals, providing the final brush-stroke on the retro picture. The overall effect is pleasant, a little underwhelming, but perfectly functional all the same time.

Half Pixel has set Retro Galaxy up in a 5x3 pattern, offering 243 ways to win. Three or more matching symbols consecutively from the first reel form a combo, regardless of the row they are on. Whenever a winner lands it triggers a couple of key features – Rolling Reels, and the Multiplier Trail, both of which are covered in the next section.

Allowing players to get their nostalgia fix on any device, Retro Galaxy is playable from 20 p/c to £/€20 per spin. Stats are one of the game’s highlights, starting with a nice average figure of 96.05% for the RTP rate. Wins land fairly thickly thanks to a hit rate better than 1 in 3, or, 34.41%, which works well with the features to give the game flow. However, the math model is highly volatile, making it a poor fit for those looking for a casual ride into the past.

A bit of free association turns up the words ‘neon’, ‘Miami’, and ‘chrome when it comes to the paytable symbols. Low pays are bold pink 10-A icons, worth 1 – 1.5x for five of a kind. High pays are lightning bolts, stars, BARs, Sevens, and a colourful geometric shape. Land five of the premiums for returns of 5 to 30 times the stake. The jazzy looking wild isn’t worth anything on its own, but it does substitutes for any symbol except the scatter. The wild appears on reels 2, 3, 4, and 5 in the base game or free spins.

Nostalgia is once again the name of the game when it comes to features, since all are classics such as Rolling Reels, Multiplier Trails, and free spins which have all appeared in classic Microgaming slots such as Immortal Romance and Jungle Jim.

Whenever a winning combination lands on the reels, the Rolling Reels feature comes into play to remove winning symbols from the reels, allowing new ones to drop in. These new symbols may lead to more wins, and Rolling Reels continue to roll until no new winners appear.

While this is going on, the Multiplier Trail is working its magic. This is a win multiplier, starting at x1 on the initial spin, increasing to x2 on the first roll, x3 on the second roll, and maxing at x5 for any subsequent rolls – during the base game.

Landing at least 3 scatter symbols anywhere on the reels triggers the free spins feature - 3, 4, or 5 awards 10, 15, or 20 free spins, plus a prize of 2, 10, or 100 times the bet respectively. During free spins, the Multiplier Trail gets a boost, starting at x2, and rising by +1 with every roll to a maximum of 15x. The Multiplier Trail does reset between free spins as it does in the main game. Should three scatters land on a free spin, five extra spins are added to the remaining total.

Retro Galaxy has its moments, though they have pretty much all been seen before in one form or another. Rolling Reels, Multiplier Trails, plus 243 win ways is a proven formula that has served developer Microgaming well in the past and haven't been used with much imagination here. As such, it comes across as a rather bland and unoriginal creation that piggybacks off of old Microgaming merits.

Besides features, Retro Galaxy’s potential is its trump card. At full stretch, the game is capable of hitting wins of up to 7,300 times the stake. Potential like this helps make Retro Galaxy a viable option for those looking for dependable gameplay along with solid payouts.

Despite the positive stats and mechanics, Retro Galaxy isn’t exactly an unmissable slot. Perhaps it’s the bandwagon feel of the theme or the rehashing of older features, but the game lacks much wow factor. Retro Galaxy comes across as a slot Microgaming has tested their partner with making before setting them a more ambitious project. This is pure speculation, of course, just an impression Retro Galaxy gives off.

If Retro Galaxy was a test, then Half Pixel has probably passed it - just barely. You won’t find much new here, either in terms of gameplay or theme, although that probably won't stop some from thinking it's an okay slot. 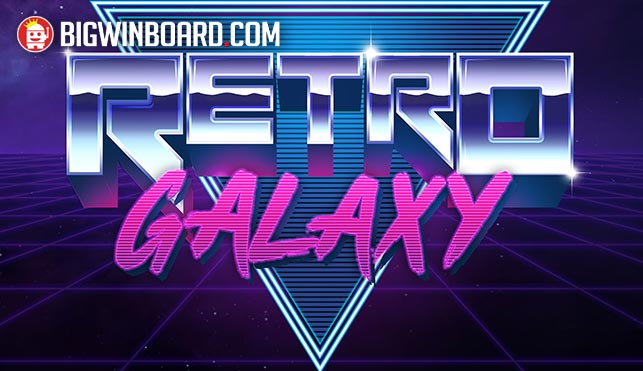