Microgaming's most recent confederate, Plank Gaming, is back with a second release (third if you count Puffer Goes Wild, which does not seem to be available anywhere, however) entitled Rich Geyser. The first one, Neptune Rising, was not all that bad and scored an honourable 60% in our review, which is good considering all the dross most of the other Microgaming partners have been churning out. We still don't know much about this tiny studio other than that it's Malta-based and that there appear to be people involved with experience from working with Quickspin.

Powered by Microgaming and released on the Quickfire platform, first impression of Rich Geyser is that it looks rather basic. This is true, not only visually, but mechanically as well. The game is built using a classic setup of 5 reels, 3 rows and 10 fixed paylines and can be played from between 20 cents and 100 Euros per spin across all compatible devices. There's not a whole lot to dig into in terms of features here. In fact, you don't even get free spins. At its core, Rich Geyser is all about the Gushing Wilds Respin feature where wild symbols award respins until they fall out of view.

The oil theme is a bit different, so props to Plank Gaming for giving us something else other than yet another slot based on ancient China, Egypt or Indiana Jones. Visually, however, it looks rather dated and, unfortunately, about as exciting as a gas bill but as we've come to learn, looks are only of secondary importance when it comes to slots. We had a bit of a laugh about the title as well, which we suppose is meant as a wordplay on the term rich geezer. However, the term they were looking for was probably gusher and not geyser, unless, of course, there's a hidden level where the oil guy turns to geology and goes hunting for hot springs all across Iceland.

A quick peek at the paytable reveals nothing extraordinary. You'll see lower value J, Q, K and A royals as well as more rewarding stock reports, oil barrels and the wealthy geezer himself, who doesn't seem too bothered about the hazard of smoking on an oil field. Land 5 of him and you'll get 100 times your total stake. With no free spins feature, there are no scatter symbols to chase. Instead, it's the wild that is of central importance here. It appears on all reels and will award 250 times your stake for 5 of a kind. All symbols, even the wild, appear fully stacked on the reels.

The only feature is activated upon landing 2 or more wild symbols anywhere on the reels. Known as the Gushing Wilds Respin feature, the wilds will move down 1 position on each respin until all wilds have dropped out of view. In theory, you should be able to land a full screen of wild symbols worth 2500 times your stake, although we're not sure if this is actually achievable. Unfortunately, when it comes to Microgaming, they're a whole lot more secretive than most other providers which means we rarely, if ever, get to see the hit frequency, bonus frequency, max win potential or even volatility.

There's something seriously wrong with the basic concept of Rich Geyser. The actual execution leaves a whole lot to be desired and we're thoroughly surprised to see how little effort has been invested into the audiovisual design and, even more so, the mechanics. The game is too plain, uninspiring and flat out boring in all honesty, and it's extremely hard to picture anyone coming back for a second round. Many low paying games will at least offer some entertainment through innovative features and vibrant animations, but you get neither here.

The only thing that Rich Geyser has going for it is the exceptionally high 97.36% RTP which means it can potentially come to good use when you need to clear wagering. Other than that, there's nothing to see here.

Rich Geyser turns cash into crud, or is it the other way around? 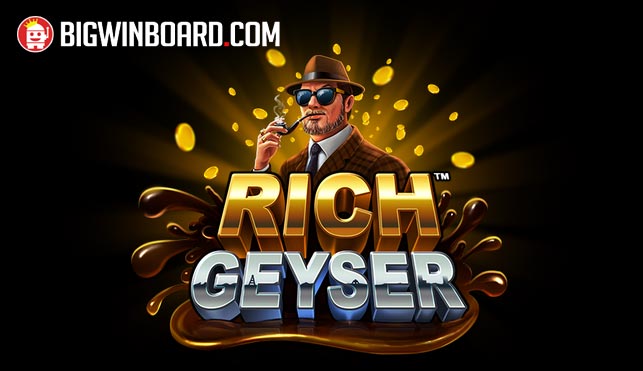