✅ Play Riches of Midgard: Land and Expand on

Riches of Midgard: Land and Expand is a reminder that NetEnt is one Swedish studio which rarely delves into its Nordic heritage for inspiration. A flick through their back catalogue turns up more druids or Egyptian gods than Norse deities. Perhaps after what Hall of Gods accomplished, the team felt that not much else needed doing in the genre. However, mythology fans can again thank NetEnt for returning Odin, Thor, and Freya to the reels, swinging hammers and bringing the lightning in Riches of Midgard: Land and Expand.

The game starts well, due to the big, bizarre wooden contraption housing the reels in the middle of the screen. Set in an idyllic Midgardian landscape, the 3-reel, 9-payline grid is surrounded by the fertile fields and mountains of Scandinavia. Just a quick note for those unfamiliar with Norse mythology. Midgard is one of the Nine Worlds, the one where humans live, surrounded by a giant serpent. It was created when the all-father Odin plus siblings Ve and Vili took down the giant Ymir. There are great stories there, so it’s easy to see why they continue to make a huge impression on pop culture, slots especially.

NetEnt has done it quite well, going for a cartoon look rather than the heavy treatment this theme often gets - cute rather than raw power. The results are similar to what we often see in Relax Gaming slots such as Ramses Revenge, or Marching Legions. The soundtrack is a bit of anomaly. The rickety reels clunk and grind as they spin, while grunt is provided by the powerful sound effects.

Riches of Midgard is available across all devices, giving players a range of betting options from 10 p/c to £/€200 per spin. The math model proved to be a rather tricky wee beast during test runs, requiring perseverance to see what the game was capable of. That didn’t turn out to be anything extraordinary once fired up, though a decent enough RTP rating of 96.03% would suggest things should even out to an extent in the long run.

A little unusually for a three-reel slot, the symbols pay out in combinations of two or three. The high pays do at least; the lows still need a full line of three to payout. There are 10 pay symbols altogether, 10-A making up the bottom end of the table followed by, a hunk of meat, a horn, Freya, Thor and Odin. Landing three premiums on a line returns a reward of 1-15 times the stake.

What starts as a modestly sized slot gets engorged during the features – it doesn’t have ‘Expand’ in the tile just for fun. Gameplay centres largely on the Hot Spot Reels which can lead to respins, in the base and bonus game.

The single position reels bolted to the side of the wooden device are the Hot Spots. Hot Spots spin at the same time as regular reels but do not contribute to line wins. Their job is to activate Respins. If matching symbols land in the two Hot Spots, as well as on two or more regular reels, the Land and Expand feature is triggered and a Respin is awarded. The symbols which activated the respins expand to cover all positions on the reel and are locked in place for the respin. If a matching symbol lands on the respin, it too expands to cover the full reel. If all three reels display the matching symbol from the start, there is no respin; an expanded reward is instantly paid. Only high-value symbols or blanks appear in Hot Spots during the base game, shifting to high and low symbols in the bonus.

It couldn’t be a Thor slot without his trusty hammer somewhere. In Riches of Midgard, Mjolnir is the scatter symbol, where 3 of them on the reels activate 8 free spins. When free spins are in play, each Mjolnir scatter on reel three awards two more free spins (without limit) and adds a new row at the top or bottom of the reels. The expanded grid also increases the number of bet lines. When the reels reach their full 7 row height, 29 bet lines are activated. A wild symbol also enters the game during free spins. It appears on the left Hot Spot to substitute for any symbol landing on the right Hot Spot.

Riches of Midgard is quite a singular experience, wrapping up a bunch of features that work in an intriguing way. In saying so, there are recognisable elements, such as the expanding symbols which draws the mind to Book of Ra. Hot Spots trigger respins quite frequently to keep the base game going, and their presentation on the tottering wooden frame is well designed. Free spins are a lot tougher to trigger of course, where the extra rows are a welcome addition, expanding not only reel but the game’s potential.

However, the irregularity of free spins didn’t seem to have much positive effect on their value, which tended to the low side most of the time. It’s certainly no Hall of Gods. Where the older jackpot game has a track record as one of the highest playing slots of all time, Riches of Midgard is a lot more modest. Single spin wins max at out 435 times the bet when the grid is fully expanded during the bonus. So, this Midgard isn’t super-rich, though the game is set before corporate-led governments fuelled the capitalist gangbang we find ourselves in today. So maybe NetEnt went for a level of historical accuracy.

To sum up, Riches of Midgard contains a dose of originality, yet its cartoon looks blunt the edge Norse slots often provide. That’s not a deal-breaker in itself, but when combined with the patience required to trigger the features’ best bits, Riches of Midgard can be more frustrating than exciting.

Riches of Midgard has a unique touch, but its light-hearted treatment of the Norse theme combined with the amount of perseverance required to get anywhere can dampen the experience. 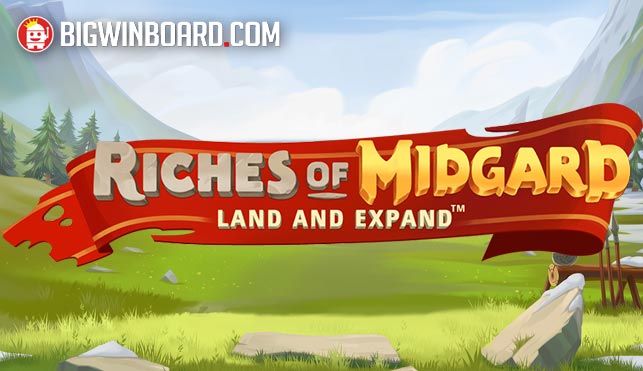