There is a nice wee back story to Riviera Star from Microgaming partners Fantasma Games. It all revolves around four suspicious characters having a night out at a Riviera casino. It’s a nice premise. Picture the blue of the Med, the sound of cashed-up punters tossing chips and slots beeping and chirping away. A potential for some escapism as the winter nights start drawing in perhaps. Anyway, one of these dodgy guests is in the midst of carrying out a daring heist. Who could it be?

Riviera Star has a relaxed good time feel. It is similar to the way Mission Cash used a cartoon-style approach to lighten up a serious theme. What could be more glam than a night out at a Riviera casino? First things first though. We have to earn our way into this particular casino. Until then, the base game plays outside so we have to loiter around on the street for a bit. The background contains a red carpet beneath the reels tempting players up a few stairs to the casino while the game grid is situated over the entrance, beneath an ornate awning.

The action happens over 5 reels, 3 rows, and 20 paylines on any device. No dinner jacket is required here, this Riviera casino is more democratic than that and accepts bets from 20 p/c up to £/€100 per spin. Governing the game is an RTP rating of 96.26% and low/medium volatility. The win rate is around 1 in 5, of typically low amounts due to the symbol values. Things improve thanks to the features, but it can take a while for the game to warm up.

The cartoon graphics spill over into the paytable where all symbols are brand new. The lower end is made up of miscellaneous bling such as champagne on ice, a burning stogie, a clip of banknotes, a high-end watch, and a dollar sign gold ring. All gaudy as it gets status symbols. The high end includes the four dubious characters - the bearded hipster, glasses guy, Panama hat lady, and a modern-day Wilma Flintstone lookalike. That last character is the most valuable, for the un-breath taking amount of 4 times the stake for five of a kind. They are all disappointingly low values at first look. Fortunately, we do get a frequent respin feature which prevents those low-value symbols from being a complete disaster.

The most common feature is the Respin feature. It's similar to the Sticky Win respin we saw with NetEnt's Long Pao slot not long ago, but with a couple of additions. When a winning combination lands, it locks in place while all of the other symbols respin. Respins continue as long as more symbols land in winning positions, which can be the original symbols or new ones as well. When no more of the appropriate symbols land or the grid is covered the feature is over. Wins are paid and it is back to the base game.

Next up is the Superstar feature which is randomly activated at the start of any spin during the base game. When in play, the golden star from the title floats down and lands on reels 2, 3, or 4 and has a multiplier that starts at x1. It is sticky and has 3 lives. Every time a non-winning spin occurs, it loses one of its lives. When wins occur, the multiplier increases by +1. If a wild lands while a Superstar is on the grid it also increases the multiplier by +1. Along with affecting the Superstar, the wild in general play also substitutes for any other base game pay symbol.

The black and gold casino chip is the scatter which can land anywhere. If 3 of them land during a respin sequence, they trigger 10 Free Spins. During the free spins round we get the privilege of actually moving off the pavement and inside onto the gaming floor. In there, some of the characters can be spotted. The Superstar symbol can trigger during the bonus round, but it wanders now and can move anywhere on reels 2 - 4. If 3 more scatters land during one spin/respin sequence, they trigger 10 more free spins to extend the round.

Riviera Star is not quite the night of "lawless gambling and madness" promised in the game's blurb. But it's not bad either. Just don't expect Monte Carlo levels of glamour and winnings though. This game is more down to earth and that modesty comes with a lower payout potential to match. With top prizes of 1,975.5 times the stake, there are few Russian billionaires or shipping magnates filling out this casino. Moreover, the low volatility and not-so-thrilling potential is something that might be a turn off for some players, which is a shame because the gameplay isn't bad at all.

Getting anywhere with Riviera Star will rely heavily on doing well during the bonus round. The method of triggering free spins, with the chip landing during respins is clever, and gives the game a longer shelf life. It can be quite a test of patience, but you get close so often that it becomes personal. The thing is, once the free spins are over, and you’ve experience all the game can offer, it’s hard to find the motivation to go through it all again.

All told, Rivera Star is a cute little game with a story and some decent features. It's not a title that will make any headlines, but the superb design and absorbing gameplay is undoubtedly going to keep a lot of players entertained.

So which one of our four characters was guilty? No idea. Sadly, that piece of information doesn’t get shared. Our money is on the green guy with the glasses who looked pretty suspect during the bonus round.

Riviera Star may win you over with glitzy designs and excellent gameplay, but the low potential might turn some players off. 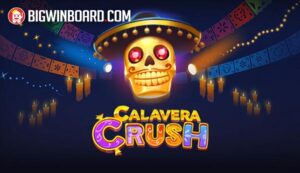