Asian themed slot Royal Dragon Infinity Reels comes courtesy of GamesLab, an independent Australian outfit that’s been churning out slots since 2002. They have largely avoided making major ripples in the industry, but are things about to change? They’ve leapt into bed with fellow countrymen ReelPlay, licensing their Infinity Reels mechanic which has been utilised by several studios as of recent. GamesLab has taken the cautious road by choosing a safe theme and recycled many of the standard features typically associated with the mechanic. It’s a move unlikely to break it out of relative obscurity and make a bigger impact, though the game might appeal to certain fans of this style.

A rather handsome mountainous image has been used to colour the scene, the background scrolling as Infinity Reels are added to the grid. The more reels you add, the more of the scenery you get to enjoy as wins build up. Play starts on a 3-reel, 4-row default mode, where five matching symbols left to right trigger a win. If for whatever reason the mountains at sunset image, or the clichéd symbols weren’t big enough clues, the guzheng heavy soundtrack leaves no doubt you are in the heart of Asia. It’s all rather pretty, if a bit generic at the same time. 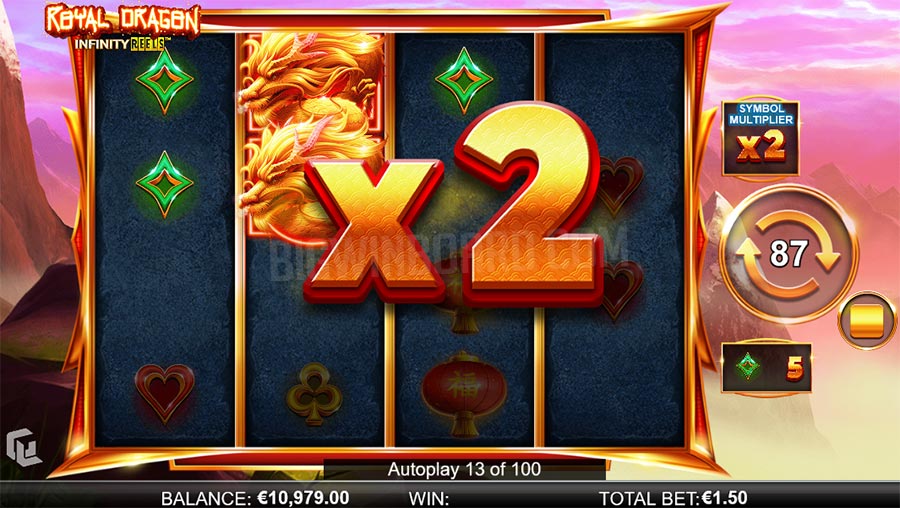 Royal Dragon Infinity Reels is released via Yggdrasil’s Masters Program which is a collaborative program that allows smaller independent studios to release games via their platform, and which gives them greater reach. As is usually the case with Yggdrasil, we get quite a comprehensive game sheet. First on the block is RTP where the default value is 95.85%, rising to 96.2% when the feature buy is engaged. Volatility has been tuned to a high setting, coupled with unexciting non-gamble potential. Despite there being a jackpot in the main game, it’s free spins where best wins are possible, and triggering them occurs once every 150 spins, theoretically. Regular wins, meanwhile, occur around one in three spins, or 33.48% of the time.

They might have a bit more shimmer than usual, but the symbols used are all classic icons. The first four on the table are card suits – spades, clubs, hearts, and diamonds. Asian culture steps in for the higher paying lotus, lantern, frog, koi, lion, and phoenix symbols. Winning combinations are calculated by the number of participating symbols multiplied by their value. As in indication, five of the picture symbols are worth payouts of 0.33 to 1.33x the stake. A golden glowing dragon wild completes the table, substituting for all symbols except the gong.

As mentioned previously, five or more matching symbols from the leftmost reel constitute a winning combination. If the third reel is used in the win, a new reel is added to the right-hand side. If any new symbols improve the current win, another reel is added – until new symbols do not add to the win. Then, the reels reset for the next spin. This is the core function of the Infinity Reels mechanic.

To keep things spicy, any base game spin may randomly activate a frenzy spin. When active, a multiplier of x2, x3, x4, or x5 is added to the symbol multiplier and applied to that spin.

Adding reels to the grid doesn’t just happen for your health, there is an added incentive for doing so. Should 12 or more reels be added in a sequence, a jackpot prize of 200x the total bet is awarded on top of any regular symbol win. Symbol multipliers are not applied to jackpot wins, but frenzy spin multipliers are.

To trigger free spins you’ll need the gong symbol. Gongs pay from any position, and any five or more of a kind gong win triggers 7 free spins – plus 1 free spin for every triggering symbol above 5. During free spins, any gong win awards an extra 2 free spins. During this round, the same multiplier increment system found in Giza Infinity Reels is used here as well. On a winning spin, the symbol multiplier increment increases by 1, up to 5 at the most. Consequently, non-winning spins drop the increment by 1 to a minimum of 1. Symbol multipliers do not reset between free spins.

When free spins conclude, it doesn’t mean the thrills are necessarily over. If you’re feeling lucky, you can gamble your winnings - up to 5x the original value. The minimum you’ll walk away with if things don’t go your way is half of the free spins winnings.

Lastly, Royal Dragon Infinity Reels may offer a feature buy. It costs 66.67x the total stake, and for that you get 9 free spins plus a starting symbol multiplier of 1x to 5x.

Despite being a fairly good looking game, Royal Dragon Infinity Reels is very much a paint by numbers exercise. ReelPlay has supplied the machinery and much of the features, GamesLab supplies the artwork - everyone’s happy. Well, players heavily invested in the Asian thing will be at least. Others will be a little nonplussed at getting the same old features and setup, not to mention a set of unappealing numbers.

Potential could have swooped in to restore Royal Dragon Infinity Reels from the recycle bin, but unless you’re willing to lay it all on the line, payouts are meagre. During regular play, the most you can win is 2,652x the stake. This can technically be boosted to 10,000x via the gamble feature, yet this is asking a lot of players. Not everyone wants to risk a decent win to get the most out of a game, so the modest potential doesn’t do any favours.

Royal Dragon Infinity Reels fails to impress much due to its weak stats, generic theme, and recycled features. 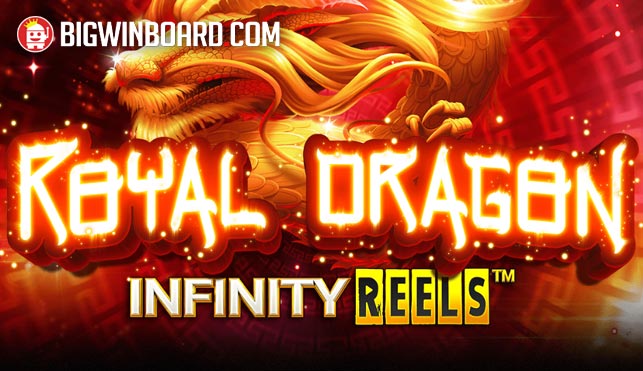