✅ Play Sails of Fortune on

Developer Relax Gaming turns its attention to the high seas for a piratical game called Sails of Fortune. At first glance, it might look like a fairly traditional slot, but this being Relax, interesting things occur during free spins when mystery symbol stacks and increased ways to win enter the fray. Both are fundamental in cracking the bigger payouts here which can be considerable. Pirating is one of the more populous categories out there, so let's see what wizardry Relax Gaming has done to make theirs stand out from the bunch. 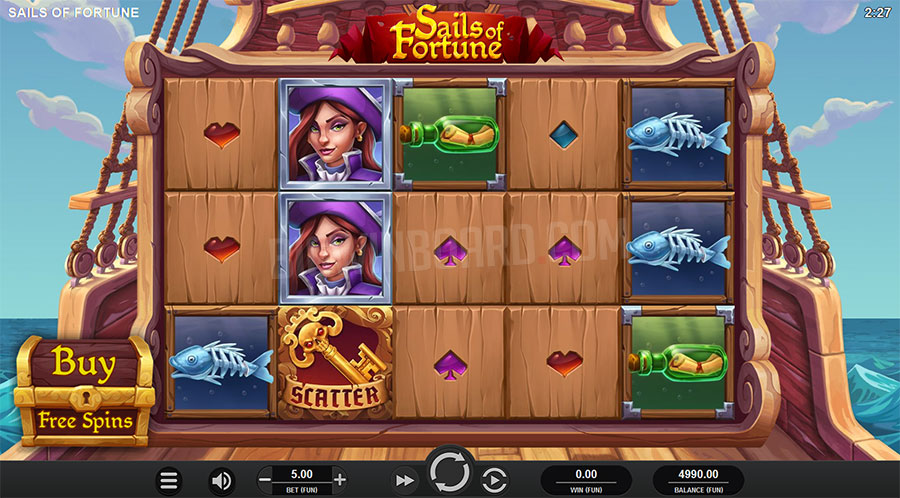 Played using 5 reels and 243 ways to win, the grid sits atop what has to be one of the cleanest pirate ships ever to sail the seven seas. Maybe the crew nicked a brand new boat, or the captain is a stickler for swabbing the decks. Whatever the reason, this ship is so squeaky clean it borders on being plain. Some studios get mean when designing pirate slots, others, like Relax, take the words 'Jolly Roger' literally. The icing is the jauntiest soundtrack this side of Jamaica, resulting in a pirate ship experience closer to an Ayia Napa party boat than a deadly galleon bristling with cannons, and swabs lusting for plunder. The atmosphere improves when the sun goes down for free spins - then the game adopts a dark Monkey Island feel.

Highly volatile, Sails of Fortune relies on several features to assemble as one to dish out the big wins. But before we take a closer look at the features, it's worth mentioning that RTP comes in two forms, starting with a default value of 96.17%, as well as an increased figure of 96.65% when the bonus buy is active – more on this below. Players may select stakes from 10 p/c to £/€50 per spin, on any device, to begin the treasure hunt.

Prising open the paytable we find 9 regular symbols to knock together wins with. This occurs when at least 2 captains or 3 of every other symbol type form a combination left to right, from the first reel. On the low side of things are 4 card suits, set into planks of wood, then we get more valuable fish bones, messages in bottles, harpoons, a lady, and a gentleman pirate. Should 5 premium symbols line up for a win, their reward is a payout worth 1.5 to 8 times the stake. Sails of Fortune continues the trend for omitting wild symbols, relying on mystery symbols instead to increase winning potential.

Features in Sails of Fortune are made up of Mystery Map Respins available at any point in the game, and Treasure Hunt Free Spins. Free spins are where the game can drastically increase its reel heights and ways to win.

Question marks are the Mystery Map symbols, and landing 1 or more on any reel awards a Mystery Map Respin. On each respin, mystery symbols convert into the same pay symbol, then move one reel to the left until they fall off the first reel. Until that happens, respins persist as long as a Mystery Map Symbol is present on the reels.

Despite the presence of Mystery Map Respins occurring at any time, Sails of Fortune is very much all about its bonus game. Known as Treasure Hunt Free Spins, the bonus starts when 3 or more skeleton key scatters land anywhere on the reels to award 8 free spins (+1 additional spin is awarded for every extra key).

As well as awarding Respins and walking left as described above, when mystery symbols land during the bonus they have the added benefit of expanding to fill the whole reel they are on. Also, keep an eye out for Treasure chest coin symbols which may appear on reel 5. Every 3 coins collected upgrades the mystery symbol, adding an extra position up to a maximum of 6 symbols in height. Should mystery symbols be present on all reels, 7,776 ways to win will be in play. Whenever the mystery symbol expansion is upgraded, +1 free spin is awarded.

There may also be a feature buy available where these things are permissible. For a cost of 70x the total stake, players are taken straight to the Treasure Hunt Free Spins. Entering the bonus round this way has the added benefit of being played with a slightly higher RTP of 96.56%.

Overall, the positives outweigh the negatives, but there is a feeling of unfulfillment after playing Sails of Fortune. One of the issues is the base game isn't hugely entertaining. Perhaps it's the overabundance of wood from the ship and the low pay symbols, combined with the lifeless background. Or possibly it's because Mystery Symbols are just 1x1 size in the base game, rarely adding up to much in their non-expanded form. Anyway, the main game can grind, making the bonus buy a major temptation as it often is in a Relax title.

Once free spins are active, the game shifts into another gear. It's quite literally like night and day, where even the background gets interesting. One thing to keep in mind about Mystery Symbol stacks is that they are mystery symbols, not wilds, so it takes a fair amount of luck for them to pull off something special. If there is more than one in action, unless they are adjacent to each other, they don't tend to be super effective at producing big hits. In other words, it's a highly volatile feature that saves itself for the big hits.

What helps is having a win-all-ways system rather than a few set paylines. It's also technically possible for all 5 reels in free spins to display mystery symbols, though the most was 3 during testing. Should the dream scenario occur and 5 fully expanded mystery stacks reveal the highest paying captain symbols, an immense treasure of 25,000x the bet waits. A lot has to come together in just the right way for that to happen.

All in all, Sails of Fortune does offer something different for pirate fans. It lacks something to make it a really great slot, perhaps the base game is a little too sanitary, but great things are possible during free spins.

Though it lumbers along over calm seas for most of the time, Sails of Fortune is capable of high drama.