Take to the briny blue waves in Sea God, a slot from Reflex Gaming designed in collaboration with Stakelogic. Sea God might have been high tech a few years ago, what with all the shifting reels, additional rows and so on. However, in this Megaways dominated era, Sea God feels a few years late to the party. Then again, maybe Reflex Gaming knows something the rest of us don't and are banking on this sort of style being the new retro sometime in the future. Let's wade in and see what we can make of it.

Sea God is a game that likes to throw extra rows and ways at you at various points of the game. A hint is provided at the start, where the default 5x4 grid has two semi-transparent dormant rows sitting above it. Strong ocean imagery is used in the background, where two massive waves on either side of the grid are about to crash into each other. Standing at the right side of the screen, trident in hand, is the Sea God himself, no doubt Neptune or Poseidon related due to the other Greco-Roman touches scattered about the place. He also bears a resemblance to Jason Momoa's Aquaman as well, all glowing hair and chiselled pecs. 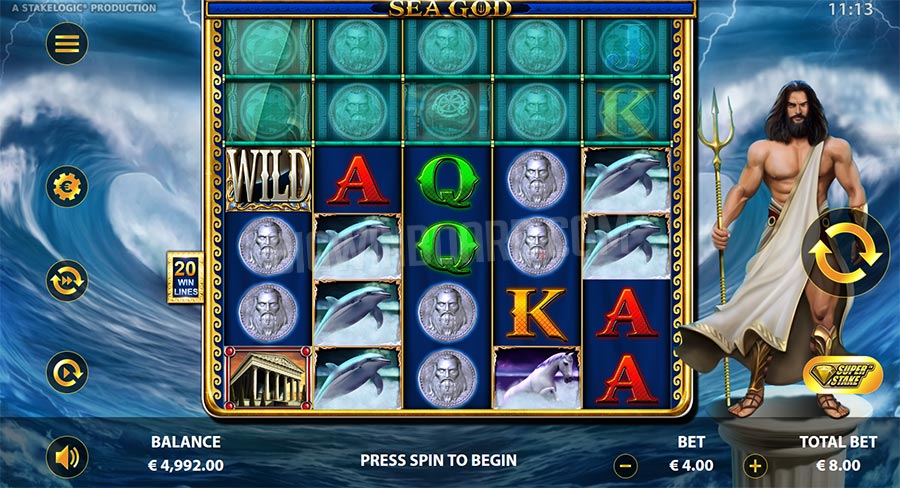 Reflex has designed Sea God to run just fine on any device, offering players stakes from 20 p/c to £/€200 per spin. The RTP is slightly below average at 95.21%, which does lessen the appeal since everything else is somewhat mediocre, while the math model runs on a medium-high volatile setting. In many regards, there is nothing Sea God does with statistics to counterbalance its low-key gameplay.

In the default mode, 20 fixed paylines are provided to land winning combinations of three or more of a kind across. When the reels expand, as detailed below in the features section, paylines increase up to 45. In total, 10 regular paying symbols are included on the paytable; 4 are J-A royals, the others are images of coins, dolphins, unicorns, sails, temples, and logos. The logo offers the best value at 15x the bet for five of a kind, while the other picture symbols are worth 1 to 5 times the stake for a line of five. The Sea God appears on wild symbols in two forms. One is a 1x1 sized tile; the other is a 1x6 sized Stacked Wild which can land fully or partially in view. Both replace regular paying symbols to complete line wins and are worth up to 15x the bet for a five a kind win.

There are several extra features to go over here, including the Super Stake, Super Reels, and free spins. Super Stake comes from the Stakelogic arsenal and doubles the bet when activated. Doing so increases the number of scatter symbols on the reels, increasing the free spins bonus frequency. There is no mention of the regular frequency for free spins, but when the Super Stake is engaged, it is once every 43 spins on average.

During the base game, at random, the Super Reels feature may trigger. When it does, players get 3 spins on an expanded reel set 9 rows high, utilising 45 paylines. While Super Reels are active, there is a greater chance of landing stacked symbols for bigger wins.

Lastly, keep an eye out for the pearl on the reels, this is the scatter symbol. When 3, 4, or 5 scatters land, players win 8 free spins plus a payout of 2, 10, or 50x their bet, respectively. During free spins, there are scatters on the third reel. If one lands, Super Reels are activated, and +3 extra free spins are awarded.

Sea God is one of those games that felt old fashioned even on first release. It's hard to pin down the exact reason why. It's a combination of the reels, with their blue background, the flimsy gold trim, the UI, the archaic reel/payline setup; everything just adds up to a passé experience. If Reflex was going for some sort of retro angle, fair enough. If not, then Sea God just feels poorly made. You can see how the expanding reels focal piece has been thought through, but it has been done so much better elsewhere.

Even the way the theme has been dealt with appears half-hearted. For one, the name 'Sea God' has already been given to a previous slot, and is indicative of a generic treatment. Maybe the thinking was to generalise the main character to appeal to a broader range of players, though like the rest of the game, it come across as watered down.

The payline system is an issue as well. At the default 4-row size, it's not quite so noticeable, but when maxed out at 9 rows high, the measly 45 paylines just seem wrong. Compare Sea God to something like Katmandu Gold, which, when it reaches 9 rows in height, has 531,441 ways active. Sure, size isn't everything, yet Sea God feels like an anachronism when stacked up against what other studios are doing. Either the team was trying to cater to players who prefer lines to ways, or the mathematicians didn't want to overtax their computational devices.

To be generous, Sea God might attract players who like a constant flow of activity. When the Super Stake is activated, features did hit at a constant rate. The results weren't exactly impressive, but there were a lot of them which some players may enjoy. Others who want punchier action, a more up to date game, or a modern paying mechanic, are unlikely to uncover that on this deep dive.

Sea God has a long way to go before it is worth your bandwidth, your time, or your money. 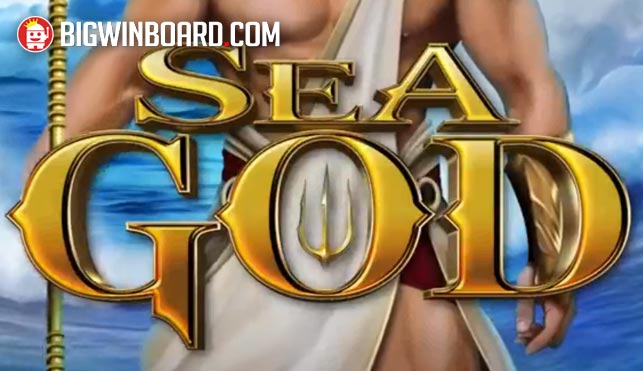