NetEnt are back with a new slot set on the plains of the Serengeti. The word ‘back’ is not just a literary device. After some mediocre slots, NetEnt have created a game that is as fun to play as it is to look at. The screenshots on their own might not seem all that special, but the aural effects play a significant role. The African wilderness is no stranger to the gambling world; the plains are as littered with the corpses of old slots as they are with wildlife. Any developer who takes on the theme needs to work a bit of magic to stand out. Is Serengeti Kings up to it?

Serengeti Kings takes a light-hearted approach. This is Africa as Walt Disney imagined it where there are no bugs or creepy crawlies. Where even deadly beasts aren't really deadly, they're just overly playful. What makes the game initially enticing is nice background that lays the scene. But it is the soundtrack that stands out and pulls you into this world. It's Lion King-ish. It has that soulful group singing thing that makes black churches so vibrant and lively. If the Lion King had a laid back slacker sibling more interested in enjoying life than ruling it, Serengeti Kings would be it. Also worth noting - with the new user interface and with some fresh new game elements implemented, Serengeti Kings bears little resemblance to past NetEnt slots.

The action here happens on a 5-reel, 4-row grid, with 26 paylines. Slightly odd numbers that were a little off-putting at first we have to admit (we always prefer 1024 win ways when going for 4 rows). There is a good spread of bet levels which start at 10 p/c per spin up to £/€100 at the most. Symbols also come in a well-balanced mix. The low pays are 9 - A royals which have been designed using different animal skins. The high pay symbols are all critters of the wild such as meerkats, zebras, giraffes, hyenas, lions, and panthers. Those last two, being the Kings of the Serengeti, are the most valuable at 5 times the stake for five of a kind. Wild symbols are worth even more at 50 times the stake for five on a full payline and substitute for any regular pay symbol.

Volatility sits on a medium to high setting and compliments a clever math model. Testing turned up nice runs of low value wins interspersed with larger, more satisfying returns. It's not a massive payer, but its features are capable of producing some decent payouts. The Feature Buy, which we will get to below, comes with three options which alter the RTP from 96.2% - 96.7% depending on the one you choose.

Lions and panthers are kings around here, and these beasts play a central role in the game's features (black panthers are otherwise most widely associated with the Americas, but whatever). The game begins in Lion Spins mode which happen in the game’s day time and eventually switch to Panther Spins which occur in the dark. Both modes have 12 spins each, and any lion or panther symbols that appear on the reels are collected in two counters flanking the reels.

On the 12th Lion Spin, the game does not collect lion symbols. Instead, the Lion feature is triggered, and all collected Lion symbols are sprinkled over the reels at random. The same happens to the Panther symbols on the 12th Panther Spin. This can create winner combinations and it also has another aspect. If a Lion Symbol lands on a Panther or vice versa, they turn into a wild symbol. If similar animals land on top of each other they add +1 to a multiplier. If a cat lands on top of a wild it also adds +1 to the multiplier.

Each bet line has a multiplier starting at x1. All multipliers in a winning combination have their multipliers added and applied to that win line. Once the 12th spin is completed, the game switches to the other cat’s mode and the process repeats.

The highlight is the bonus round - 3 or more scatter symbols trigger 12 Free Spins. The more scatters that land, the better your chance of collecting Panther and Lion symbols for the final spin:

For the first time, NetEnt has decided to include a Feature Buy option to shortcut directly to the free spins game. There are three options to the Feature Buy - 3 scatters cost 58.7 times the stake, while the cost of 4 or 5 scatters varies depending on how many lion and panther symbols are already collected. During testing, the 5 scatter option was coming up around 358 times the stake which is ridiculously high. It did manage to return positive winnings each time however - though that might have been beginners luck.

Serengeti Kings is a solid game for sure. NetEnt proves again that a few original features can breathe life into a battered old theme and make it relevant. It is also nice to see NetEnt return to form after the last couple of dud slots that crossed our path. They have done it in a simple, straight forward way – with good graphics wrapped around a solid math model, with some compelling features.

The way spins come in batches of 12 with a special Lion or Panther feature at the end is clever and builds excitement. It's not super original, IGT did a similar thing with Scarab for example. But it works well with Serengeti Kings. Some slots have a 'one more spin' factor; this slot has a '12 more spins' factor. You can't leave the game mid-way through a batch of 12 spins, because something special could be on the way – in particular if you have already collected a good number of lion or panther symbols. Watching those symbols get placed on the reels at the end of a round produces some satisfyingly intense moments too. Even more so when it includes both cats at the end of a free spin round.

Potentially Serengeti Kings might not be able to go toe to toe with the heavyweights of the African wilderness scene – the Raging Rhino games and so on. But it still holds its own. Get a few wild lines to connect at the end of free spins, and you are looking at around 300-400 times the stake right there, more if you manage to nab a multiplier or two. Not overly exciting numbers, but it does offer a decent amount of play time and some interesting moments nonetheless.

So is the Feature Buy worth the cost? Tough one. It can certainly work out in your favour, but 5 scatters can cost a substantial amount of coins. Even ignoring the Feature Buy, Serengeti Kings is a well thought out and executed slot. Overall, there are a lot of positive things going on that make it worth a spin or two.

Serengeti Kings treads an unconventional trail and, as it turns out, is mostly better for it. 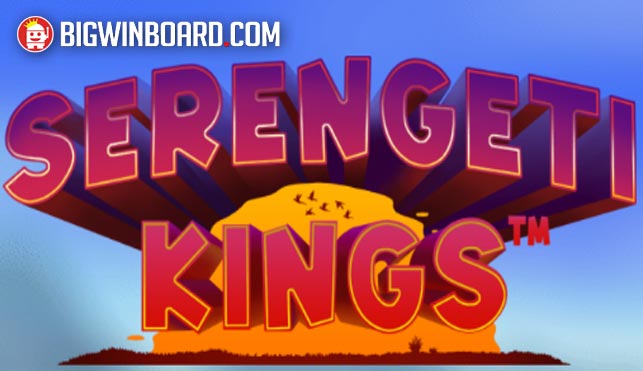