Demo play is not available in your region. Please visit one of the casinos listed below for free play.
NetEnt

There were a ton of great slot announcements from ICE London 2020, but few generated as much buzz and anticipation as Street Fighter 2 from NetEnt did. The wait is over, and the final product will exceed many expectations. Sometimes developers rely on the recognition power of a branded slot, while the development takes a back seat to make a quick and easy buck. Not so with the Street Fighter 2 slot. It's not too much of a stretch to say that Street Fighter 2 almost redefines what we think of in a slot. For one, the arcade license has been put to good use and permeates every aspect of the game. Secondly, the whole way the game is played is new and fresh. It's not without its drawbacks, which we'll get to, but for now, it's round one, fight!

The first thing to clear up is that the Street Fighter 2 slot is based on the original coin-op version released in 1991. The first Street Fighter game was a hit, but the sequel took things to the next level and dominated arcades worldwide. One main draw was the 8 characters which fans will be chuffed to see, not only make it to the slot version, but each one brings a different modifier with them. As well as choosing which payer to do battle, stakes must also be selected from 20 p/c up to the truly heroic 700 €/£ per spin, although this range can vary depending on market. Once settled, the chosen character jets off to a random part of the world to begin their first battle. Each battle includes multiple spins, and concludes when one of the fighters runs out of health.

At the core of the gameplay is NetEnt's Cluster Pays system which is played on a 5x5 grid slot format where 25 symbols tumble into place on each spin. Payouts occur when 4 or more matching symbols connect either vertically or horizontally and which also trigger the Avalanche feature. With this feature, winning clusters are removed from the grid to let new symbols fall into place. The Avalanche will continue to payout as long as winning clusters appear.

The image on the high pay symbols change depending on who is fighting, but the low pays are always J-A royals in an old arcade game font. There are four high pay symbols - 2 are victory versions and 2 are defeat versions which pay up to 30x for clusters of 16 or more. Victory and defeat symbols can also appear in 2x2 colossal sizes for guaranteed wins.

When combinations of high pay symbols land, the respective fighter deals damage to their opponent until the health bar of one of them is reduced to zero. If the player is defeated, then the Car Smash bonus game is launched, if they win, the Beat the Boss game is triggered.

We'll cover both of those games shortly after a look at the stats. Starting with the RTP which like everything else is a little complicated and ranges from 96.02% - 96.08% depending on which character is selected. Then again, if the Insert Coin Gamble game is activated, RTP skyrockets to 98.7% - 100%. Volatility can also vary by fighter, but expect a rather high setting regardless. Right, enough housekeeping, on to the good bits.

It all starts with fighter selection, and each of the 8 original characters affects the game in a different ways on a sliding volatility scale of 'Win Often' to 'Win Big' we get:

Each character has a Wild Gauge that is filled by one point for each high pay symbol in a winning cluster. When there are no more winners on screen, and 7 points on the Wild Gauge, their modifier listed above is activated. As usual, wilds can substitute for any other pay symbol.

Each battle round has two outcomes – win or lose. If players lose, then the Car Smash Bonus Game is triggered. Here players can either manually smash a car or hit the 'Quick Finish' button to win from 5 to 15 times their bet. Once completed, players can stick with the same character or choose a different one for a new battle.

If players win the battle, then the Beat the Boss Free Spins are awarded. Here, the rules are the same as the base game, except that boss levels come with a win multiplier. There is no set number of free spins, instead the bonus game continues until someone is defeated. Beat the boss and players move to the next level, or lose and head back to the base game. There are 4 bosses to defeat: Balrog (x2 multiplier), Vega (x3 multiplier), Sagat (x5 multiplier), and M. Bison (x10 multiplier). Now, should you beat all opponents, then you pick up an additional 100 times your stake award for remaining undefeated throughout the tournament.

In one final twist, when players lose to a boss they may get the chance to restart the level via the Insert Coin gamble feature. The feature can only be used once per Beat the Boss Free Spins round and requires you to give up a portion of your winnings. The advantage, however, is that you get to play with a significantly higher RTP setting of between 98.7%-100%.

With so much going on in Street Fighter 2, it's hard to know where to begin. One thing is certain, fans of the arcade game will love it - at least at first. If players will stick around long term will come down to whether they'll enjoy the commitment required to go far with the game. What that means is that, once a battle starts, you are locked in until you win or lose. Until that happens, bankrolls can rise or take hits as much as health bars do.

The Car Smash bonus is a rather unexciting consolation prize of low value. Make it to the Beat the Boss game, however, and things really heat up thanks to there being no set free spins and the addition of win multipliers. With a max win potential of over 7,000 times the stake, it's quite clear that there's enough worth collecting a few bruises along the way for.

If you are intrigued by Street Fighter 2, it would do well to demo the game before making a commitment. The gameplay is so unusual that at first, it's like being assaulted by E. Honda's 100 Hands Slap - you can't really tell what's going on. Despite the initial confusion, the game is fun from the get-go and is a testament to NetEnt capturing the spirit of the arcade game perfectly.

NetEnt has encapsulated nearly every aspect of the arcade game; traveling the world battling contenders, the individual moves and catchphrases, and the soundtrack. To see and hear Ryu unleash his iconic "Hadouken" surging punch will instantly take fans back to the glory days of arcade games. Thus, it's a slot with a long shelf life if players embrace not just trying to win coins, but reliving classic characters from their video gaming days.

Okay, it's not perfect, the target audience is very specific and it won't suit players who want straight forward gaming. Those who don't understand the concept might find the game cluttered, complicated and confusing. But the angle here is not to please everyone. This is a branded slot that does everything possible to please fans of the arcade game. NetEnt has flexed their creative muscle and the result is like no other slot out there.

With the Street Fighter 2 slot, NetEnt silences any talk that they might have lost their innovative touch with one well-placed Dragon Punch. 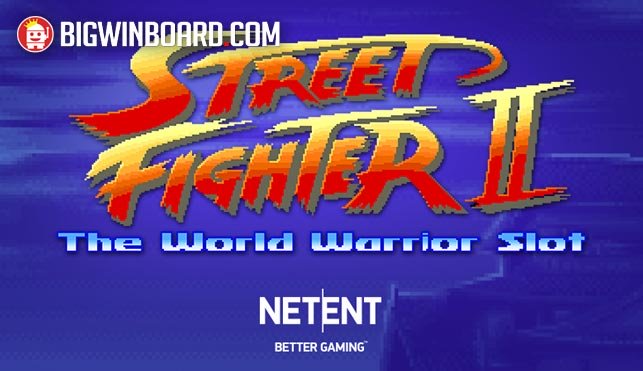