Demo play is not available in your region. Please visit one of the casinos listed below for free play.
Play'n GO

✅ Play Tale of Kyubiko on

If you're scouting around for the biggest, baddest, meanest, most intricate slot on the block, you might want to look away now. Sadly for rough riders, the Tale of Kyubiko from developer Play'n GO possesses none of these attributes. If, however, you're the sort of player who likes to immerse themselves in a smartly presented cultural experience of a slot with limited yet useful features, Tale of Kyubiko might be just the ticket.

In many ways, Tale of Kyubiko is quite enchanting, partly because it is based on a made-up (as far as we can tell) story of a mischievous spirit called Inari, who appears before late-night travellers before leading them to her lair. She does this by using her shapeshifting power and can appear as either a human or a fox. The tale doesn't mention which form she uses to lure people, nor what she does to them when they reach her lair. No bother, in the slot, Inari makes good use of her powers as a full reel wild. 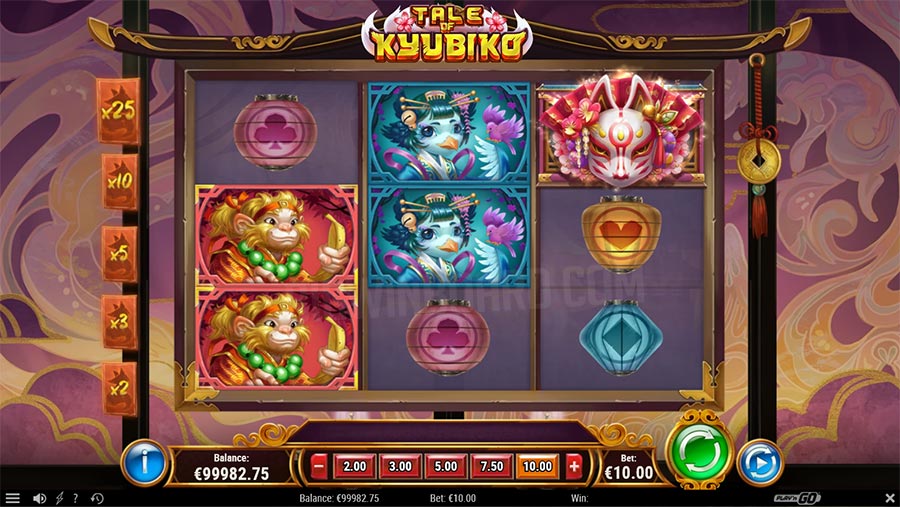 Digging a bit deeper into the title, the word Kyubiko might be a concatenation of 'kyubi', a mythological nine-tailed fox, and 'ko', meaning child. However, a bit of guesswork went into this interpretation. Maybe it relates to 'Kuebiko', the Shinto god of agriculture, knowledge, and wisdom who is represented as a sentient scarecrow that can't walk? Probably not, on we go.

You might not be able to tell from a static screenshot, but Tale of Kyubiko is actually quite an attractive game. Play'n GO has created a handsome Asian experience, displaying pagodas, mountains, and cherry blossoms on the home screen, while the grid is peppered in a bunch of nicely animated symbols. The music is just as in-theme, and the whole game feels as much anime as it does traditional.

Played on a basic 3x3, 5-payline reel set, players score a win when three matching symbols land across them. Essentially a fruit slot at its core, it's fair to say Tale of Kyubiko is not one of Play'n GO's big hitters; powered by a medium volatile math model, the studio has rated as 5 out of 10. As always, the RTP is variable, topping out at 96.29% at its default level, dropping all the way to a downright mean 84.29%, depending on the market. Any device may be used to witness the shapeshifting action where stakes range from 10 p/c to £/€100.

Tale of Kyubiko keeps symbols to a minimum as well, where seven regular paying tiles accompany two wild symbols. The first four are low-value card suits paying 0.1 to 0.4x the bet, then come three animal characters paying 2 to 8 times the stake. Better values can be had from the individual mask wild, which pays 10x the bet when it forms a win on its own. Otherwise, all wilds in the game replace any of the paying symbols. 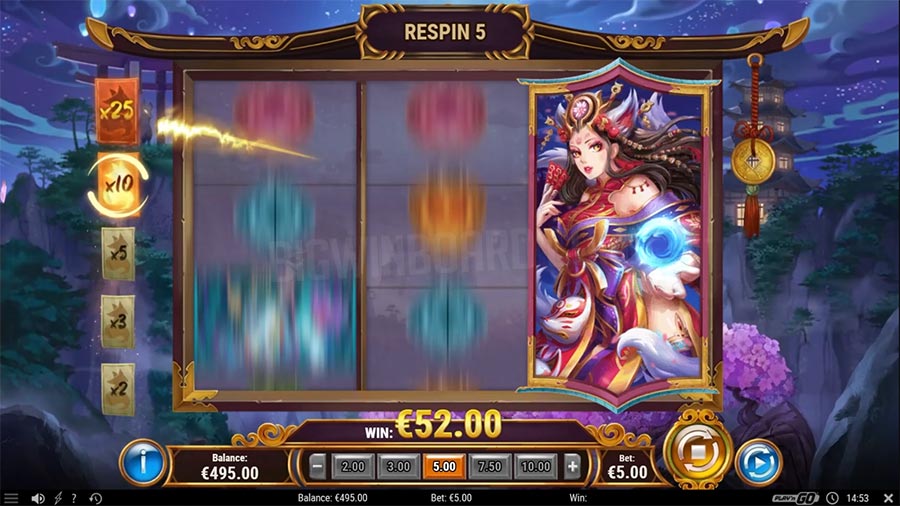 Sometimes, a simple-looking three-reel slot can pack in way more features than originally suspected. However, Tale of Kyubiko is not one of these games, relying on a stacked walking wild delivering most of the thrills, assisted by a progressive multiplier as it moves around the grid.

Inari is the stacked wild and can land fully or partially in view. Occasionally, when Inari does land partially in view, there is a chance it is nudged to cover the whole reel - if it would form a winning combination.

When the Inari stacked wild forms a winning combination, a free respin is triggered. Between respins, Inari moves from her current reel to a new position. What's neat is the image on the wild tracks Inari's shapeshifting progress from fox to human form. Also, when the wild stack moves, the win multiplier increases by +1 step. Multiplier values are displayed to the left of the reels, ascending from x2, x5, x10, to x25. When respins end, the multiplier resets.

Tale of Kyubiko is a simple game with not a whole lot needed to get to grips with. It's the sort of slot built with audio-visual entertainment in mind rather than hardcore gambling. That sentence alone should separate those keen to uncover Inari's secrets from those who couldn't give a hootenanny. Those who are interested will discover a good-looking game, which is closer to watching a lush anime film than playing an online slot at times.

Those times will be brief and fairly far apart, as wins with Inari aren't super common. Nor are regular wins in general, really. When Inari does connect with something to form a win and begin dancing around the reels, the respin feature produces a measure of entertainment. Obviously, it gets more nail-biting as the multiplier progresses. Should she boogie all the way to the x25, it'll help achieve the game's max potential, which at 2,250x the bet isn't a heck of a lot, though fair enough when considering what Tale of Kyubiko has to work with.

Tale of Kyubiko's simplicity does lend itself to a repetitiveness that became noticeable as time passed. After oohing and ahhing over the home screen and the flowing nature of the visuals, it didn't take long for an antsy feeling to settle in. Inari's Dance popped up often enough to keep the pace going, but unless you're majorly into the concept, it might be hard to really keep tedium at bay. There were no hard feelings when all was said and done, though, so to end on a positive note, the combination of unique look, interesting subject matter, plus high production standard should be enough to excite players into this sort of thing.

Whilst Tale of Kyubiko is a feast for players who go for low key fruit slot gaming, to the exclusion of just about everybody else. 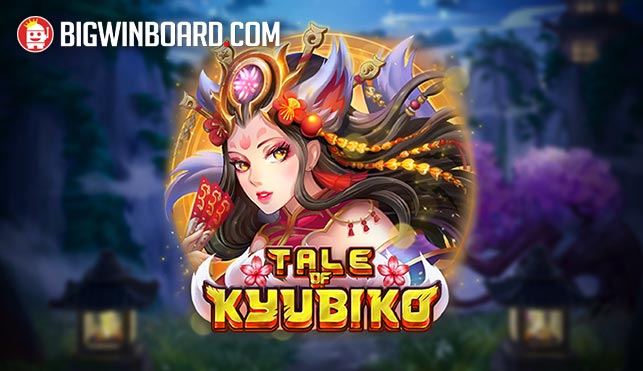