✅ Play Temple of Medusa on

Of the three gorgons in Greek mythology, the one you are most likely to run into in the iGaming world is, of course, the snake-haired, stony gazed Medusa. The other two, Stheno and Euryale, barely get a mention at all. Perhaps because their names are trickier to pronounce, or because they were immortals and Medusa was not. Ironic really, because it was Medusa's death at the hands of Perseus which sealed her immortality in other ways, while her two sisters have faded into relative obscurity. Don't expect any historical revisionism from developer All41 Studios, though their slot Temple of Medusa focuses solely on the most famous gorgon.

Temple of Medusa shares many similarities to the NextGen classic Medusa, released in 2012. For one, the grid layout is the same where the gaming takes place on a 5-reel, 3-row game area offering 25 ways to win. Visually, the two games are similar as well, featuring plenty of columns, temples, and classical iconography, though all are common in most Ancient Greek-themed slots. Above the reels, the game displays its winning potential, which will tell many players all they need to know whether Temple of Medusa is right for them. We'll do the big reveal shortly. 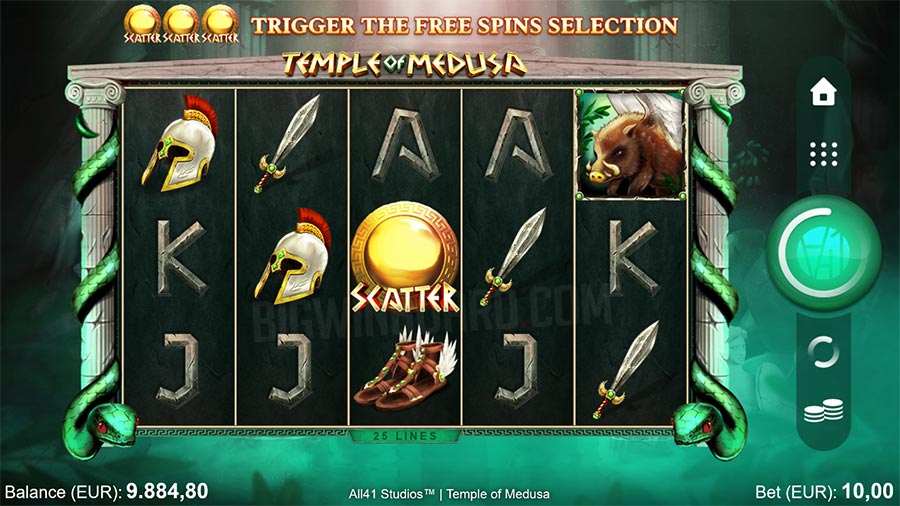 Until then, let's cover some technical information. First of all, Temple of Medusa is playable on any device and provides a range of stakes from 10 p/c to £/€100 per spin. Hit frequency is 31.10%, meaning a win turns up every three spins or so. The 96.4% RTP configuration, meanwhile, should find universal acceptance, though the high volatile/low potential combination will be less exciting for gamblers who consider these two elements mismatched.

Checking out the paytable, we find a bunch of in-theme symbols. Stony, Greek-fonted 10-A royals make up the lower value bunch, while premiums offer up swords, winged sandals, helmets, the flying boar Chrysaor (Medusa and Poseidon's offspring), and faithful Pegasus. At least 3 symbols are required to form winning combinations, with premium symbol wins of 5 symbols in length being worth a reward of 5 to 15 times the stake.

Medusa famously turned people into stone just by looking into their eyes, and in Temple of Medusa, she can turn regular symbols wild. As well as symbol transformations, players also benefit from a triggered round of free spins.

The first thing to know is that there are several wild types. One is a regular wild symbol, appearing on any reel replacing pay symbols to complete a winning combination. Combinations made up of wild symbols are actually the most valuable in the game, worth up to 25 times the stake for 5 of a kind.

Second key point is the Medusa Wild which appears only on the middle three reels. When she lands, neighbouring symbols may be turned wild according to certain patterns. The patterns could be in one direction (horizontally, vertically, or diagonally), two directions, or all directions. Obviously, the more directions, the more wild transformations may occur.

The main event in Temple of Medusa is its free spins round. Scatters appear only on the middle reels - 3 in view award 2x the bet plus entry to the bonus game. Before the bonus begins, players choose one of 4 options they'd like to try their luck with. The first 3 are 15, 10, or 5 free spins with wilds that spread in 1, 2, or 3 directions. The 4th option is a lucky dip, where the game awards a random number of free spins and directions from the above options. This could be 15 spins with 3 directions, for example. Scatters remain in the game during free spins so the round can be retriggered.

Finally, there is a chance to trigger the Lucky Prize during the base game which awards 5,000 times your bet.

When the testing session was over, there was nothing about Temple of Medusa to prompt a repeat viewing. It doesn't even do anything so badly you want to re-experience the cringe. This is ultra-light gaming, with a few interesting tricks that ultimately fail to accomplish anything of note. Oddly, Temple of Medusa is highly volatile too, making the meagre potential on offer extra conspicuous. Perhaps if symbol values were higher, or wilds were sticky, or something, anything, to lift the game beyond a sleepy, repetitive, low value, cruise mode.

If you've ever pined for a watered-down version of NextGen's Medusa slot, All41 has stepped up to deliver. Temple of Medusa might not be a complete imitation, which is too bad because the game might have been more exciting to play if it was. The absence of respins or multipliers from NextGen's Medusa slots are sorely missing and greatly impacts the fun factor, not to mention the amount of cash up for grabs.

As for potential, it's hard to see how it is possible to land anything of significance without factoring in the fabled Lucky Prize 5,000x win. Without the Lucky Prize, however, your best opportunity for larger returns is landing more than one Medusa symbol (if possible) to turn the entire grid wild for a payout worth 625 times your stake.

In other words, don't expect too much in the way of rewards when taking on this Medusa. Then again, why would you want to? Temple of Medusa takes far more away from the original experience than it adds back, and what's leftover feels woefully underpowered.

Ultimately, Temple of Medusa comes across as a sort of watered-down version of an older mythology classic that fails to add anything which wasn’t there before. 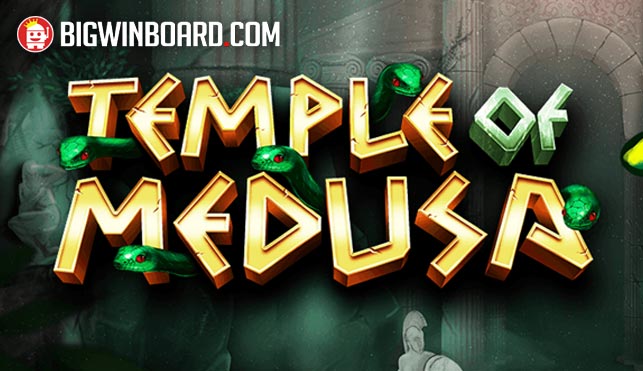