Play Terminator 2 once and you’ll definitely be uttering the phrase, “I’ll Be Back” before long

How could anyone not love the Terminator franchise? It’s perhaps Arnold Schwarzenegger's most iconic portrayal of a character in his whole career and a definite go-to movie for anyone who's a fan of action and robots. This Microgaming slot offering aims to take you back to all the thrills from the second movie in the series, Terminator 2. As such, it incorporates characters and features that appeared in the film, giving you quite the insight into it. Even if you’ve never seen the film before, this slot will provide you with an exceptional game, thanks to Microgaming’s penchant for high-quality.

Powered by the Quickfire platform, Terminator 2 is a video slot with 5 reels, 3 rows and 30 fixed paylines that can be played across all devices from 30 cents to 30€ per spin. The main game is quite basic, but the free spins feature can deliver sizeable wins, especially if you trigger the legendary "Hot Mode" feature.

Terminator 2 encapsulates the blockbuster with scenes from the movie, excellent animations and an outstanding soundtrack. In the backdrop, a selection of robotic wires and electronics can be seen while upon the reels, the symbols begin with the four lower value card suits – clubs, diamonds, hearts and spades. Following on from these, Terminator 2 features premium symbols of characters from the movie, starting with the full robot version of the Terminator (T-800). Then comes Sarah Connor and the bad guy, T-1000. John Connor is next, while the humanoid version of the Terminator is last, giving you 26,66 times your stake for 5 on a full payline. The T2 logo represents the wild which substitutes for all symbols except the scatter and will give you 100 times your stake for a 5 of a kind combination.

Let’s not look past the T-800 Vision mode, triggering randomly after any non-winning spin during the base game. If this does come into play, it only takes the appearance of a single scatter symbol to trigger the free spins round. This is in stark contrast to three needing to appear in non-T-800 mode before this is triggered. Additionally, during T-800 Vision mode, a cash prize will be awarded for the appearance of any of the character symbols.

The highlight here is the Free Spins round in which the win ways are increased from 243 up to 1,024. This round is triggered by the appearance of three scatter symbols in normal base gameplay or a single scatter in T-800 Vision mode. You’ll be given a total of 10 free spins for this and during the feature, the symbol of the T-1000 can transform into any other character symbol, affording you the highest possible payout.

Now, if you see flames around the "10 free spins" message, you have triggered the secret "Hot Mode" version of the free spins game, which is extremely rare and will provide you with enhanced reels for even bigger wins.

There couldn’t be a more iconic character or film series to base a slot game around really, and Microgaming has definitely done it justice with Terminator 2. Not only does it present some stunning graphics and animations throughout, but it also packs quite some punch with a max win of nearly 3000 times your stake. It's probably not too much of an overstatement to consider Terminator 2 as one of Microgaming's best offerings. 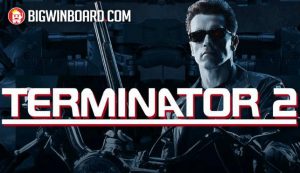