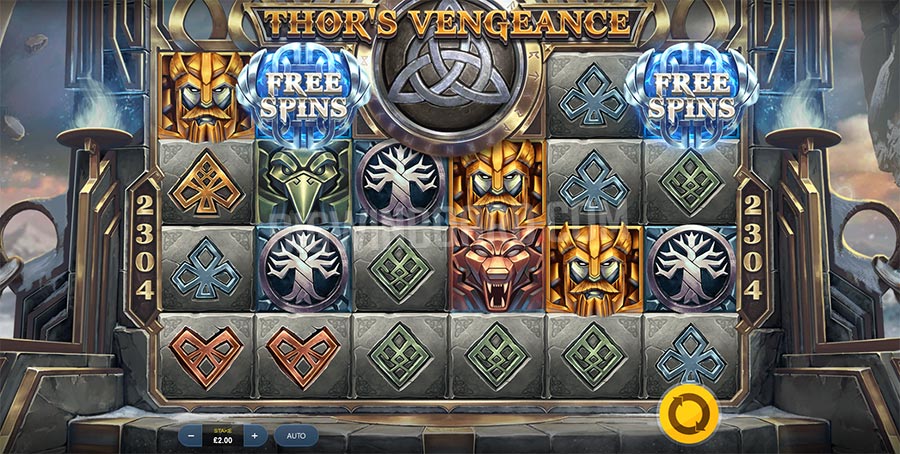 Developer Red Tiger has done pretty well by the Norse god Thor. Their previous one, Thor’s Lightning, was a solid grid slot with a great look and gameplay. Now they’ve released a follow-up, of sorts. Thor’s Vengeance offers more conventional gaming, while still possessing plenty of features and dishing up a few surprises. What’s got Thor so ticked off? It’s hard to say; the game offers no clues. Fortunately, he takes his aggression out on the reels, battering them with hammer or lightning. When he does so, good thing tends to happen as we’ll see.

Playable from 10 p/c to £/€10 per spin, the game takes place on a 6 reel game area, laid out in an unusual 4-4-3-3-4-4 format. As Thor’s Vengeance uses a pays-all-ways system, that mathematically equates to 2,304 ways to win. Amazing how covering up those two middle positions with the shield multiplier makes such a difference from the usual 4,096 on the full 6x4 setup. Visually attractive, the reels are set on a dais type area with Art Deco elements, chained down to prevent them drifting free like the floating rock formations in the icy background.

RTP is slightly down from the 96% average, no surprises there, with a default rating of 95.66%. Volatility, on the other hand, weighs in at medium/high which matches the potential and features well for those who prefer a harder edge. Combinations were fairly abundant in testing and were complemented by the cascade feature, though symbol values have been depressed to balance things out.

To score a win, you need at least three of a kind of all symbol types, except Thor who only needs two. The cascade feature then removes winning symbols from the board, allowing new ones to fill the gaps, providing more chances to win. Cascades continue to occur as long as new wins line-up.

As to symbols, runic looking clubs, spades, diamonds, and hearts make up the four low pays. On the upper end of the paytable, you’ll find ravens, wolves, the tree of life, and Thor - land six of the premiums in a row for payouts of 1.5 to 3 times the stake. Mjolnir is the wild, substituting for any normal symbol. It usually appears in 1x1 size, but can be bigger during certain features.

There are a bunch of extras to cover, most come with the name Thor attached. As well as free spins, we get Thor’s Lightning, Thor’s Hammer, Thor’s Multiplier, and Thor’s Generosity. It’s like one of those Marvel comics that has past, present, and future Thor in it – there’s a whole lot of Thor going on.

First up is Thor’s Lightning which strikes randomly. When it does, one of three modifiers come into play:

Next, mighty Mjolnir makes an appearance in the Thor’s Hammer feature by being smashed against the reels. It either appears as a 2x2 sized wild in any position, or nudges rows and reels. Whatever is chosen, a winner is the guaranteed outcome.

If the Thor’s Multiplier is randomly triggered, he sees the big man summon lightning once again. This time he directs it at the multiplier shield to award a multiplier of up to x20.

The last modifier is Thor’s Generosity which may appear when two scatter symbols are in view. If it does, Thor blasts one random symbol with lightning turning it into the third scatter to trigger the feature.

Whenever 3 scatters appear on the reels they award 8 free spins. Each additional scatter over 3 adds another +4 to the total. During the feature, free spins may be retriggered in the same way. Once in, a growing multiplier comes into play. It starts at +1 and increases by 1 following each win. The other modifiers may appear, so when Thor’s Multiplier activates, it increases the current multiplier by up to x20.

It seems Red Tiger has broken the drought by making a pretty fun game. To be fair, Thor’s Vengeance is not quite as thrilling as Thor’s Lightning, though the higher potential might sway players over. The game was designed all in-house too, none of this riding on someone else’s coattails a la Gonzo’s Quest Megaways. It appears Red Tiger has taken on board some of the criticism that’s been slung its way. The result is a decent slot.

There are a few niggles. Why RTP couldn’t be on the sunny side of average for a change, or why they had to cover two positions on the middle reels, almost halving the number of win ways? Still, these are more technicalities rather than an aversion to the total package. Even potential is up significantly over their recent releases. This time around, wins of up to 5,249 times the stake are possible – so a good haul is up for grabs when luck is in.

Little things add up in a positive way too, like being able to retrigger free spins which you don’t always receive in a Red Tiger game. Usually, you have to hope like heck the limited number of spins gets you somewhere. Of course, it’s still like that in Thor’s Vengeance to an extent, but it feels less restricted. The progressive multiplier growing after wins is appreciated too. Again, this has been done 100 times before, but should you be blessed by the deity, Thor’s Multiplier goes down a treat when it shows up.

While it’s not exactly cutting edge, Thor’s Vengeance mixes the right elements to create some enjoyable Nordic mythology with decent potential to boot.