Developer TrueLab takes players on an adventure with a dashing young explorer in the action-themed slot Victoria Wild. Powered by Yggdrasil Gaming courtesy of their YGS Masters program, Victoria Wild is decked out in three different wilds, a collection system, and several unique free spins locations.

Before diving into the game, TrueLab provides a backstory to help broaden the experience. The hero of the tale, Victoria, has the task of conquering a drought-ridden desert, on her hunt for treasures. Okay, that’s about it, but despite the scant details, TrueLab has crafted quite an enjoyable world for players to immerse themselves in. Victoria is a likeable sort, while the map on what would be the sixth reel provides a certain sense of exploration.

The game refers to ‘the desert’ though there are no clues as to where in the world it might be. A vulture bobs away on the right side of the screen, while the grid is surrounded by dead trees, bricks and old timber. One clue could be the buildings in the back which look like those mud structures in Mali with the sticks poking out. But still, we could be anywhere hot and dusty. Not that it really makes a whole lot of difference.

The soundtrack is one of the game’s highlights. Players are treated to an orchestral piece that brought to mind the Sci-Fi film Stargate which was incidentally set on a desert world. The music piles on the drama, completing the action-adventure feel.

Playable across all devices, its 5-reel, 3-row game area is glued together by 15 fixed paylines. Players choose the value of each line from 0.01 to 12 coins, resulting in total stakes of 15 p/c to £/€180 per spin. Continuing our investigation under the hood reveals a medium volatile math model and a fairly generous RTP rating of 96.55%.

TrueLab has split the 9 regular symbols into 4 low, 4 medium, and 1 high pay. All are exploration-based, starting on the low pays which are the four points of a compass – N, E, S, and W. Each one has the same value of 3x the bet for five of a kind, rising to 15x for six. The mediums consist of a canteen, boots, a motorbike, and a handgun. This lot is worth up to 9x the bet for a line of five, or 45x for six of a kind.

Lastly, Victoria is the high symbol worth 24x for five of a kind, 120x for six of a kind. We’re only mentioning both values since for the majority of the time five reels are in play, yet an extra reel is added during Oasis Free Spins to see the comparison. The standard tornado wild has the same value as the Victoria symbol, while also being able to substitute for any regular pay symbol.

Victoria Wild is built around a collection system that culminates in Oasis Free Spins. Along the way, players benefit from a Sandstorm feature, Tornado Respins, and Lost Temple free spins.

Whenever 2 or more wilds are present on the reels during the base game, the Sandstorm feature is triggered. Here, 2, 3, 4 or 5 wilds in view award 5-8, 9-12, 13-15, or 15 Sandstorm spins respectively. On each of these spins, a jumping tornado wild leaps from position to position. Keep in mind these spins are not free.

If a jumping tornado wild lands on a regular tornado wild the Sticky Wild Respin feature is triggered. During the respin, all wilds hold their places, including the jumping wild. If a new wild appears, it holds its place as well, and another respin occurs. The sticky wild respin feature ends when no new wilds appear.

Next up is Temple Free Spins, triggered when 3 or more temple scatters appear on the reels. The more the merrier, so 3, 4, 5, or 6 scatters award 8, 10, 12 or 15 Temple Spins respectively. What you want to see during this bonus round are wild lamp symbols. If 7 or more lamps are collected, the Secret Treasury bonus is activated when free spins end.

In the Secret Treasury feature, a wheel spins, awarding one prize. This could be a 250 – 2,500 coin win, or a multiplier of x2 – x25 applied to the total amount won during Temple Free Spins. There is also a pretty lame booby prize on the wheel where you win nothing if you land on it.

Lastly, is the Oasis Free Spins round. During the game, a map next to the reels displays Victoria’s progress. Each Oasis symbol that lands moves her one step closer to her goal. When 25 symbols have been collected, 10 Oasis Free Spins are awarded.

A 6th reel is added for Oasis Free Spins expanding the grid to 6x3, though the number of paylines remains the same. During this feature, waterfall wilds appear on reels 2, 3, 4 or 5. When they land, they expand to cover the whole reel.

There is quite a lot to like about this heroine-led slot. Victoria Wild is a game with a lot going on from low-level wins to mid-grade modifiers to larger bonus games. This helps keep your mind off the map as you plod towards triggering the mythical Oasis Free Spins. To be honest, during testing we had more luck during Temple Free Spins due to a surprisingly good multiplier from the Secret Treasury bonus wheel. The multiple winning opportunities ensure solid wins are possible in Victoria Wild whichever way you cut it.

Get Vicky swinging over ravines, fending off cobras, dodging tornadoes, or whatever it is an adventuress does and wins of up to 20,000 times the stake are possible. A figure most players will be able to get on board with, though the math model might be a less savoury prospect for some.

As well as impressive numbers, TrueLab has made good use of the theme. It’s easy to bang on about going on a quest to build hype, but Victoria Wild does have a certain spirit to it. On a sensory level, the attractive graphics mixed with the stirring soundtrack imbue a healthy dose of adventure. From Sandstorms to respins and free spins, Victoria Wild offers plenty of sightseeing along the way.

So while the volatility or the 15 payline format that TrueLab seems to favour may be off-putting for some, others will enjoy the visuals, the variety of features, and the quest-based nature of Victoria Wild, not to mention its massive potential.

Victoria Wild’s Indiana Jones-style action is bound to entertain some players, though others may be turned off by aspects of its math model and mechanics. 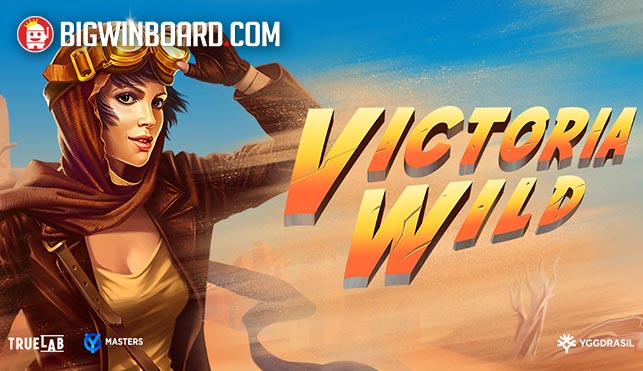