Another ambitious blockbuster slot by NetEnt has arrived. The question is, will the VIKINGS battle cry invoke the gambler sentiment?

It was during the iGaming conference earlier this year that NetEnt presented not only one but two massive blockbuster titles - Narcos and Vikings. At the time when the information was first made public, the launch of Yggdrasil's third Vikings slot was fast approaching, and so we couldn't help but wonder if NetEnt would fall into the trap of ripping off Yggdrasil. Turns out these are entirely different games as you will see.

For those not familiar with the Vikings tv-series, it's a historical tv-series drama created for the History channel and HBO. It follows Ragnar Lothbrok, a legendary Viking ruler, and his crew on their exploits as laid down in old sagas such as Ragnars saga Loðbrókar from the 13th century. Those of you who are fans of the series will be happy to see the actors known from the series represented on the reels.

The grand visual production came not as a surprise although we must say that we still managed to get caught off guard by the awesome intro that definitely helped set the mood right from the start and boost our expectations. Clicking our way into the game itself, we were pleasantly surprised to see the win-all-ways setup, which must be considered exotic when it comes to NetEnt and something that worked very well for them in Jungle Spirit which was released in 2017.

If you're familiar with the series, you will feel right at home upon entering the game. If not, you're still likely to appreciate the work that NetEnt has put into the visual production with the reels set against a wintry, gloomy, Norse landscape made out of imposing hills that slope towards an icy lake. Don't be bothered by the lone raven watching your every move!

As already mentioned, Vikings is a slot without pay lines. The 243 ways setup ensure that you win if 3 or more identical symbols land anywhere on subsequent reels. In the main game, Vikings is played on a 5x3 reel set but is switched to a 7x5 setup during the free spins feature, expanding the win ways to an astonishing 78,125 ways.

Furthermore, the game comes with several different features which we will look into further below. Playable on all devices, players can bet between €0.20 to €200 per spin. The relatively high max bet is actually a tell-tale sign that it's not a super high potential slot. The 96.05% return to player is nothing out of the ordinary and more or less within the expected range.

Vikings comes with a set of 10 symbols, 5 of which are of low-value symbols represented by 10, J, Q, K, and A made out of steel and covered in blood. In contrast, being a licensed and branded slot, the premiums are represented by characters known from the series although the Vikings logo has been chosen as the top paying symbol worth 0.5x for 5 of a kind. The premium symbols appear stacked on the reels in both the main game and the free spins feature. Interestingly, there is no Wild symbol to be seen, which likely had to stand back for the extra premium symbol.

Included in the game is something known as the Hotspot feature. In the main game, reel 3 is illuminated by an electric flow to highlight its presence. When a stacked Viking symbol lands to fully cover the third reel, all the other Viking symbols will transform into that particular symbol. The beauty here is that the Viking symbols don't have to connect. All Viking symbols will be taken into consideration when wins are evaluated.

A random feature known as the Shield Wall Feature has also been thrown in. It can activate at any time in both the main game and in the free spins feature and appears as a cluster of 3x2 or 5x2 shield mystery symbols on random areas of the reel set. The shields will then go on to reveal a premium symbol and wins are evaluated. This feature won't activate when the Hotspot feature is in play.

Players receive 7 free spins upon landing 3 scatter symbols on reels 3, 4 and 5. The bonus cannot re-activate as scatter symbols have been removed during the free spins game, but there is still a decent amount of potential packed in the Raid Spins as it's referred to. You basically get more of the same here, with a reel set that has been stretched out to substantially improve the potential. The 5x3, 243 win ways reel set has been transformed to a setup of 7x5, 78,125 win ways and the sole Hotspot reel now covers the three middle reels.

Vikings could very well turn out to be NetEnt's best game since the release of Jungle Spirit. Sure, it can be a bit frustrating to end up with dead spins and plenty of low paying bonus rounds despite a trillion win ways, although to be fair, there are providers that are far worse when it comes to this aspect.

Vikings is without a doubt a mega potential slot that is not nearly as brutal as Novomatic or Merkur slots tend to be just to make a comparison. Furthermore, Vikings appears to be well balanced with capacity to entertain and captivate players.

Intersted in giving it a go? Claim one of our best casino bonuses for maximum value. 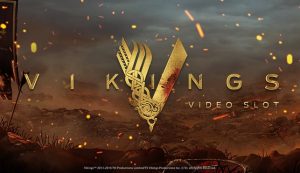