✅ Play Volts And Bolts on

Volts And Bolts is a 5-reel, 50-payline slot which includes a Free Spins Bonus and a Robot Bonus Feature with High Voltage Spins. Playable from €0.50 to €50, Volts And Bolts has a cartoonish style theme and centers around a mad character called Dr Volt and his laboratory. If you're an Generation X kid you might get some flashbacks from old point and click adventure games such as Day of the Tentacle or Sam & Max.

Symbols include A, K, Q and J playing cards, together with premium symbols in the form of notebooks, wrenches, volt meters, brains and the Volts and Bolts symbol. The latter is the most rewarding and yields a 5x win for 5 on a payline. The wild is represented by a battery symbol, while the Mad Scientist is the scatter and the Robot being the bonus symbol. Wilds come stacked 3 symbols high on all reels except the first making it impossible to land a full screen of wilds. The max win in the main game is a depressing 200x.

Landing 6 or more Robot symbols rewards 5 Robot Bonus Spins. The Robot Symbols that triggered the feature (and any other Robot Symbols landing on the reels during the free spins) will lock and be held in place for as long as the feature lasts. After each spin, adjacent Robot Symbols will transform into Robot Shapes.

1, 2, and 3 Robot Symbols connected adjacently will award 1x, 3x, and 5x bet respectively. Any Robot Shape covering 4 or more reel positions will become a High Voltage Reel. At the end of the Robot Bonus, the High Voltage Reels will spin and randomly award cash prizes or any of the jackpots. This feature is actually more attractive than the free spins game, as it includes a Mini (20x), Minor (100x), Major (2000x), and a Grand (5000x) jackpot.

4 or more adjacent ROBOT symbols will award a prize as below:

Landing 3, 4 or 5 scatter symbols will award 12 Free Spins, and 2x, 15x and 100x total bet for the number of symbols landed, respectively. During Free Spins, only Scientist and Wild symbols appear on reel 3, and that's about it as far as the free spins go. The Free Spins feature can be retriggered by landing 3 or more Scientist symbols again and the Robot Bonus can be triggered here as well.

Volts And Bolts is a horrible game, let's just put that out in the open right away. It has a relatively low RTP of 95.63% and a max win of 750x, which can only be achieved by landing a full screen of robots in the Robot bonus. The free spins game lacks innovation and is pretty much identical to the main game. Sure, there is a 5,000x Grand jackpot, but good luck with that.

The free spins were surprisingly hard to trigger considering its crappy potential and, instead, it appears that most of the payouts are allocated to the Robot bonus. Being a jackpot slot, a percentage of every bet wagered will be used to fund the jackpots, hence the somewhat lower RTP. The Robot bonus triggered quite frequently but never paid more than a whopping 50x. 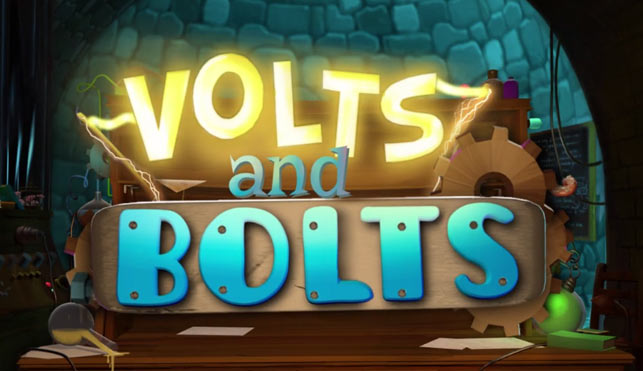