✅ Play Wanted Dead or a Wild on

Hacksaw Gaming's saddling up, hatting up, loading revolvers, and doing whatever else they used to do back in the day when rounding up cattle or outlaws. The resulting Wild West themed slot is titled Wanted Dead or a Wild and includes Hacksaw Gaming's unique blend of looks, sounds, features, and fiendish gameplay. The Wild West proved irresistible for countless cowboys, gold rushers, saloon owners, gamblers, bandits, and other fortune seekers. So, it is amongst online slot developers who regularly reach into its rich cultural offering to colour their games. With that, let's take a look at how Hacksaw's piece fares.

It starts dark, where a 5x5 game grid has been left outdoors as the sun smoulders over twisted trees and a barbed-wire fence. It's not the typical Wild West slot scene, Hacksaw shunning the dusty one-horse town setting in favour of one more unsettling. It makes you wonder where exactly we are and how the hay we ended up here? Perhaps we are waiting in the countryside to hijack a train which appears in one of the bonus games. Or running from the law? The good thing is players can choose which scenario matches their Wild West fantasies the best. Whatever the situation, Wanted Dead or a Wild has a heavier vibe than most Western slots have, and the majority of games in Hacksaw's back catalogue for that matter, though it shares a lot of similarities with their 2020 smash hit Chaos Crew.

Wanted Dead or a Wild is available on any device and comes with a stake range of 20 p/c to £/€100. While volatility overall has been rated as 4 out of 5, so rather high, the three bonus rounds have individual volatilities that range from medium to very high; this is clearly labelled if players choose to buy one of them. Default RTP has a value of 96.38% - be aware it is configurable, so it may be set at a lower level, while the theoretical return varies when buying the bonus game, from 96.27% to 96.43%.

There was talk that Wanted Dead or a Wild would be a cluster paying slot, the sort which has been flying off Hacksaw's production line recently, but they switched this to a payline system, providing 15 fixed ways to win. In total, ten regular pay symbols appear in the game. These are 10-A card ranks, skulls, outlaw getups, money bags, liquor bottles, and bullet chambers. A five premium picture symbol combination is worth a payout of 5 to 20 times the stake. On a last note, wilds land in any position, replacing pay symbols, plus they are worth 20x the bet when a line of five wilds hit.

Wanted Dead or a Wild's features include full reel wild multiplier symbols and three bonus rounds that players can trigger from the base game when certain symbols hit, or buy if the option is available.

VS symbols appear in the base game or in the Duel at Dawn feature. When they land, they expand to cover all positions on the reel, and turn wild. These symbols also display a win multiplier of x2 to x100, and if more than one VS symbol is in view, the multipliers are added before being applied to any winning combination.

When 3 or more Train Robbery symbols land in the base game, The Great Train Robbery feature launches. This game awards 10 free spins, and all landed wilds remain sticky for the remainder of the feature. Hacksaw rates the volatility of this bonus as medium.

Landing 3 or more Duel symbols triggers the Duel at Dawn bonus feature, awarding 10 free spins. The key difference between this bonus and the base game is that more VS symbols are loaded. This game is rated very highly volatile.

Also highly volatile, the Dead Man's Hand bonus is triggered when 3 or more DEAD symbols land. This feature is split into two parts. In part one, 3 spins are awarded, and only wild symbols, multiplier symbols or placeholder symbols land. When wilds or multipliers hit, they are collected and reset the number of spins back to 3. It is possible to collect up to 20 wilds and a win multiplier of x31 from this phase. When 3 consecutive non-winning spins occur, this phase ends, and play moves to the Showdown, where 3 spins are awarded. The collected number of wilds is added to the grid on each spin, and the multiplier is applied to any wins.

That brings us to the feature buy section, where you can buy The Great Train Robbery, Duel at Dawn, or Dead Man's Hand for 80x, 200x, or 400x the bet, respectively.

Wanted Dead or a Wild follows a neat line from what Hacksaw has done in the past, while conspicuously hardening the edges. There's no sushi, fruity, friendly hugging it out here. With the exception of games like El Paso Gunfight, few Westerns come across as bleakly as Wanted Dead or a Wild does. Instead of swaggering into a friendly saloon for moonshine and companionship, the team has used the opportunity to let a grittier side of their psyche take over.

Mathematically, Hacksaw games tend to be rather high-strung and Wanted Dead or a Wild continues this tradition. Bonus games bucked all over the place during testing, regardless of the official volatility rating. The biggest surprises came during the Dead Man's Hand when a good number of wilds and multipliers had been collected. In our case, this maxed out at 10 wilds, with an x27 multiplier. Collecting those modifiers is a tense process already but unloading them on the grid for the three Showdown spins can be a real blast.

The other eye-opener was Duel at Dawn, when two or more VS symbols hit, covering the grid with full reel wild multipliers. This bonus round was the least predictable of the three and could leave you hanging or drop a bunch of VS symbols out of nowhere to turn things around. The Great Train Robbery proved to be the less peaky of the three bonus games and possibly a suitable choice for players who prefer a technically smoother ride.

If you've been following Hacksaw, then you might notice iterations of these features have appeared in various guises in the past. Sticky wilds go with Wild West slots like saddles and chaffing, while Forest Fortune had a similar feature to the Dead Man's Hand, though not the same by any measure. Hacksaw continues to prove they are masters at refining their suite of features and reusing them in tweaked form, although one could argue Wanted is a continuation of Chaos Crew of sorts.

For players who prefer to buy features, Wanted Dead or a Wild's shopping list of bonus rounds could well be irresistible. Each one does something different while all having what it takes to pop. Wrap it all up in a unique vision of the Wild West, and you've got another top-shelf Hacksaw release.

The question you need to ask yourself is whether you enjoy Wanted Dead or A Wild enough to merit playing it over Chaos Crew as it’s more of a supplement rather than an improvement. 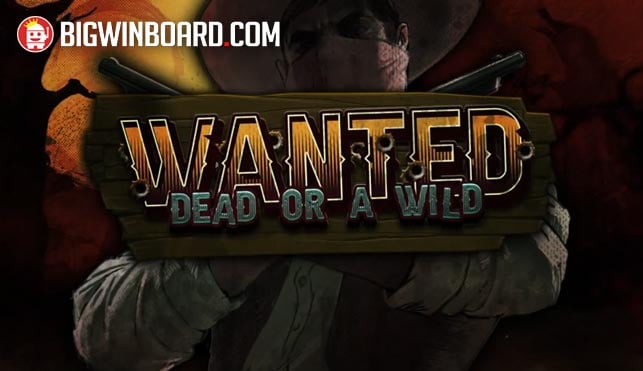