If you're dying for a new addition to ELK's classic series, Win Win absolutely fits the bill. The same basic concept from the other games in the series applies here as well, mixing old school fruit slots action with sky-is-the-limit technology of modern-day video slots. Rewinding things a bit, however, it all started with the 2017 release of Ivanhoe which, back in the days, became somewhat of a hit with the casino streaming community. It was soon followed by a more heavyweight version titled Route 777, a slightly more volatile animal with a chance to score even bigger wins. Subsequent releases were all mostly ignored by the casino community, although it was more likely a result of the lowered potential rather than poor production quality. Win Win is the name of the fifth game in the series and going by the info in our datasheet, ELK has decided to do things the right way this time.

Played using a time-honoured 3 by 3 reel set, the Win Win slot is not quite as volatile as Ivanhoe and Route 777, although, with 5000 times your stake potential, it is the highest paying classic series slot to date. Playable from 0.20 to €/£100 per spin, it comes with a respin feature that will lock the first and third reel in position which can come quite in handy if you have scatter symbols appearing on these particular reels. There's also a Win Symbol feature that can potentially lead to a jackpot win of 500 times your stake in the main game, but the highlight here is the bonus game with an opportunity for endless respins and massive payouts.

As simple in design as it may be, Win Win does not disappoint in the slightest. With a luxurious feel, as if suspended in a glass of sparkling champagne, you'll see a virtual video screen above the reels similar to previous slots where all events are indicated on the fly. As you would expect, the symbols spinning on the reels are classic fruit slot symbols represented by cherries, lemons, watermelons, single, double and triple bars, as well as single, double and triple lucky sevens. The latter will supply you with the biggest win, with 3 on a payline giving you 15 times your stake. There's a diamond wild too which, aside from rewarding you with 50 times your stake for a 3 of a kind combination, will reward you with a win of 50 times your stake.

Another symbol to pay attention to is the Win symbol. Appearing only on the first and third reels, this symbol is only in play on the central payline (referred to as the special payline). If only one Win symbol lands on the reels, it will reward a three of a kind win of the other two symbols appearing on the central payline. Two Win symbols, on the other hand, will apply a 10x multiplier on the symbol appearing in the middle. Moreover, if you land a golden 777 symbol in the middle in combination with two Win symbols on the other two reels, you'll trigger the base game jackpot of 500 times your stake.

There's also a Locked Reels Respin feature included in the game that comes into action when matching symbols appear on the first and third reels. When activated, these two reels then lock in position for three respins as the middle reel continues to spin as normal. It not only helps you land winning combination, but it will also increase your chances of triggering the bonus if you have two locked bonus symbols on the reels.

Finally, there is the Bonus round which is played when you land three bonus symbols anywhere in view. Unexpectedly, it's not played with a set number of free spins. Instead, you're started with a random multiplier value of 2x, 4x, 6x, 8x, or 10x. Now, a losing spin will reduce the multiplier by one step while a winning spin advances the multiplier in the positive direction. The bonus is played until the multiplier drops below 2x which means it could be over in the blink of an eye if you're out of luck or have you biting your nails as it takes you up and down the multiplier ladder. Moreover, to improve your chances of winning during the feature, the bonus symbols become wild. Better yet, the Locked Reels Respin feature is active here as well, which means you can get a line hit of 5000 times your stake if you get two Win symbols, the golden 777, and the 10x multiplier.

With five games into the classic series, ELK Studios has had plenty of time to fine-tune its mechanics and mathematical design to come up with a slot that is likely the best one so far. The distribution of the potential is just right with enough incentive to keep going in the base game whilst also offering great potential in the bonus. This, in combination with solid visual presentation, a unique bonus, and fast-paced gameplay, make Win Win worth a chance, even if you're not generally into 3-reel slots.

Because that is the thing; nowadays, the simple format doesn't always go down too well with players which is also the reason why developers are competing to make slots appear bigger and better with an ever-increasing number of win ways. In order to make a 3-reel slot interesting, it really needs something extra and it needs to catch the eye of the player immediately. Win Win is far from groundbreaking, but it's a thoroughly competent slot nonetheless that will keep fans of Ivanhoe and Route 777 happy, whilst also possibly winning a few new ones over. 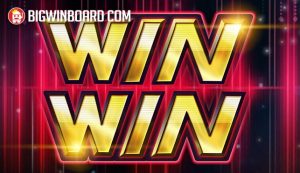