Firing up Xmas Magic it becomes entirely clear to us that the Play'n GO guys have had more important things to do this year than to prepare their Christmas contribution to the iGaming world. To put it bluntly, it looks sloppy, uninspired, and rather generic. Granted, it's hard to avoid the clichés when dealing with something as traditional as Christmas, but no effort whatsoever has been made to think outside the box here. Spoiler alert! To make matters worse, it's a clone. Yessirree. Having replaced the pumpkins and witches with snowmen and candy canes, Xmas Magic is a reskin of the 2015 release Happy Halloween.

If you're still interested in a technical rundown of the slot, here it goes. Xmas Magic is a highly volatile 5-reel, 4-row slot with 1 to 50 adjustable paylines. It offers no surprises in terms of the 96.5% RTP, unless your particular casino has opted for one of the lower settings, that is. You can play Xmas Magic across all devices from only 0.01 to €/£100 per spin, making it suitable for every budget imaginable.

And then there's the artwork. On a whole, it's not a total failure, but we know Play'n GO can do better. Xmas Magic may be typical of what you would expect from a Yule themed slot, but it lacks appeal and looks like something Play'n GO forgot to launch back in 2004. Set against a townhouse with snowy mountains in the backdrop, symbols on the reels include A to 9 lower-value symbols along with snowglobes, hot cocoa, candy canes, and stockings. The most rewarding, however, is the mistletoe which can appear stacked 4-high  - land five on a full payline to pocket 20 times your stake. The wild symbol is represented by a golden gift box. It substitutes for all symbols except the scatter and appears on all reels bar the first.

If you've played the original version you know that it's all about the Free Spin feature here. To activate it, you need to land 3 Santa Claus scatter symbols on the three first reels - this will award 10 free spins. The high-paying symbol that depicts the mistletoe always appears in a four-symbol high stack. When free spins are triggered, an additional premium symbol is chosen at random to appear in stacks of four throughout the sequence.

Now, on each free spin, two new wild symbols are added to reels 2-5. These added wild symbols are stacked onto existing wild symbols to elongate the stacks on each reel and increase the odds of creating winning combinations. The key to winning big is to land a retrigger. 10 extra free spins can be triggered during any spin to allow you the chance to win a total of 20 free spins with ever-growing stacks of wilds for a maximum possible win of 4,000 times your stake.

When the original version of this slot was launched back in 2015 under the name Happy Halloween, the response from the community was quite positive. It managed to remain in popular demand for a fairly long time and was played regularly by casino streamers until at least mid-2017. Since then, however, the landscape has changed drastically. First of all, slots don't have that kind of lifespan they had back then, and there certainly wasn't as many providers around as there is now.

Would a slot like Happy Halloween have been equally successful if released today? Probably not. Does it still hold up well? Sure, but with so many great titles to choose from, it ends up too far down on our list of classics to revisit.

Of course, the majority of players won't have a clue about any of this. To them, Xmas Magic might seem as fresh as mom's newly baked Christmas cake. For us, however, Xmas Magic didn't do much. It feels dated, looks rather dull, and besides, there are much more appealing Christmas themed slots to play, such as Festive Indulgence, Secrets of Christmas, Happy Holidays or Santa vs Rudolf.

The Xmas Magic slot from Play’n GO is anything but magical. 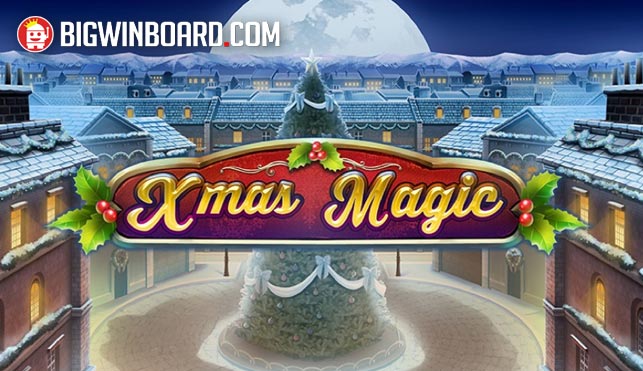