Load up your pistols, y'all, with a bit of imagination, Pragmatic Play partner Wild Streak Gaming is transporting players to Mexico for a spot of gambling. Wild Streak is a studio that certainly likes respin bonus features, and yes, one appears in Big Juan as its centrepiece. Fair dues, though, it behaves a bit differently than these bonus games usually do. Here, players respin in the hopes of landing four jackpot prizes, none of which are earth-shatteringly exciting.

Studios that go the Mexican route basically have free reign to go as bright and noisy as they like. This Wild Streak has done, yet Big Juan feels like a budget knockoff rather than a respectful piece of cultural appropriation. Okay, it's not Mexican as such but compare Big Juan to ELK's tastefully designed Wild Toro 2 - the latter is light years away from this rambunctious fiesta. Big Juan is lively, however, and maybe some players enjoy losing themselves in the chaos. Juan does plenty of pistol shooting when he's not strumming furiously on his guitarrón Mexicano, and the soundtrack has spirit, yet everything ends up being a tad tourist shop gaudy as much as anything else. 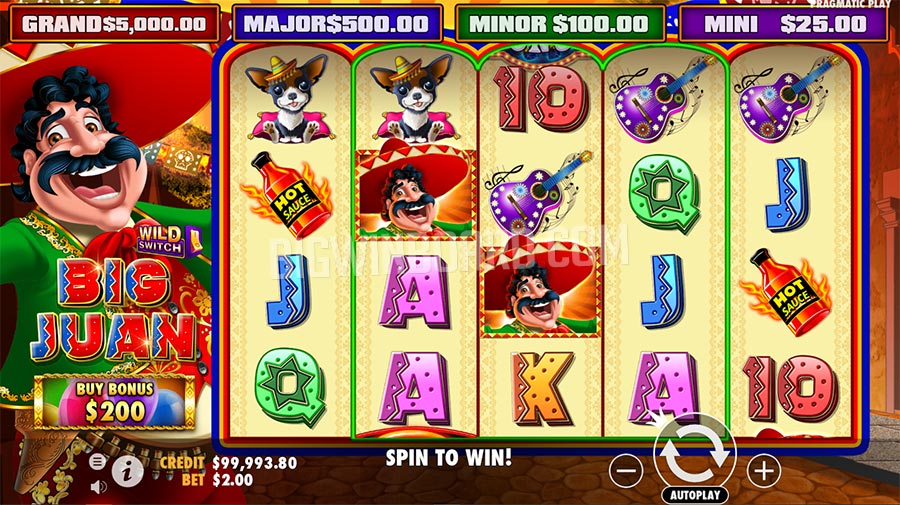 The game is split between two phases – a base game and a respin bonus round. The base game is played on 5-reel, 4-row matrix providing 40 fixed paylines to hit winning combinations across. This shrinks to a smaller area when the bonus triggers, as we'll see. Highly volatile, Big Juan's math model produces a default theoretical return value of 96.7% when playing normally, strangely dropping to 96.53% when buying the bonus for some reason. Bet range is vast, though it could have been more accommodating fore players looking to stretch a bankroll, starting at 40 p/c per spin, rising to £/€200 at the upper end.

At least three identical symbols on a payline from the left side of the grid are needed to form a winning combination. This can be done with five low pay 10-A symbols or higher-paying guitars, hot sauce bottles, chihuahuas, señoritas, or Big Juan señors. Values for a five of a kind premium combination are 2.5 to 6.25 times the stake. Look out for the wild chilli symbols which are worth double the top high pay symbol and land anywhere to substitute all other paying symbols. 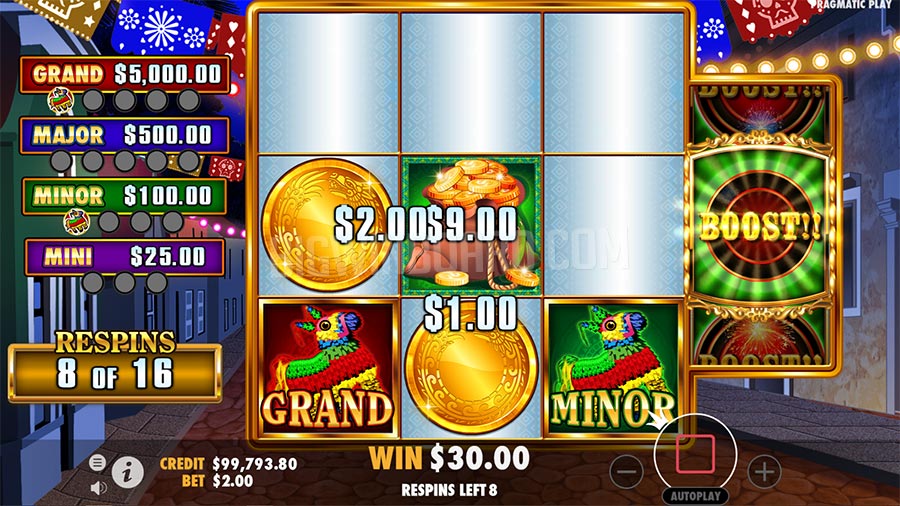 Two features appear in Big Juan. These are the Wild Switch in the base game and the triggered Respins bonus round.

In the base game, whenever at least 6 of the same pay symbols hit on reels 2, 3, or 4, they all transform into chilli wild symbols.

Landing 3, 4, or 5 pinata scatter symbols awards 10, 12, or 15 respins respectively. For the respin feature, the game is played on a 3x3 sized grid, with a special 4th reel which has just one position. On the main grid, a sticky bag of coins symbol sits in the middle position, while other positions may land money symbols, extra spins symbols, or one of the four jackpot symbols.

On the 4th reel, if a Win symbol hits, the value of all money symbols in view and the bag of coins symbol is awarded. If any jackpot symbols are in view, they are collected on their respective jackpot meter. Collect enough jackpot symbols, and the prize is awarded. The four jackpots are the Mini, Minor, Major, and Grand, which are worth 12.5x, 50x, 250x, or 2,500x the total bet.

The other symbol that may land on the 4th reel is the Boost symbol. When this one hits, the values of any money symbols in view are added to the bag of coins symbol. This value remains in place until the end of the round.

Players who would like to skip the base game and go straight to respins can do so by buying the feature. The cost is 100x the total bet for 4 or 5 bonus symbols to trigger it.

It didn't take long for Big Juan's initial explosion of sights and sounds to wear off and reveal an average game lurking beneath. To be fair, even the sights weren't up to much from the get-go. Wild Streak has a tendency to create old looking games; whether this is on purpose or not isn't clear. Whatever the case, Big Juan has an instantly dated appearance. What saves Big Juan, for a while at least, is the relentless Mariachi Band, singing away and letting rip with other entertaining miscellaneous sound effects. To be fair, one of the reasons studios possibly pick this theme is that a party atmosphere comes built-in, so half the job's done.

Too bad Wild Streak couldn't capitalise on the party aspect, though and after a while, even the positivity induced by the music evaporated as tedium set in. The Wild Switch feature isn't bad, a similar thing having been used before in Temujin Treasures. It occasionally triggered to build a decent win. In fact, the Wild Streak feature often tended to outdo the Respins Feature when it came to payout levels.

Wild Streak Gaming is certainly a strong proponent of respin features, starring in a big number of their games. If you're into these sorts of things and crave something a bit new, Big Juan might warrant a look. Its alternative set of rules means it performs differently than respin games usually do. Coin wins keep the bonus going while collecting tokens to trigger one a jackpot provides a mission. The jackpots aren't huge, but winning the grand might evoke the desire to fire off a pop gun or two. At full stretch, winning potential in Big Juan is limited to 2,600x the bet, possibly reflecting the high max bet.

In the end, once our foot stopped tapping to the beat, the game turned out to be more Big Yawn than Big Juan. The unusual respin bonus might tempt fans of the format who have seen it all. Other than that, there are more accomplished slots to get a Mariachi fix.

There are hints of originality, but Big Juan falls short of the big partying atmosphere it portrays. 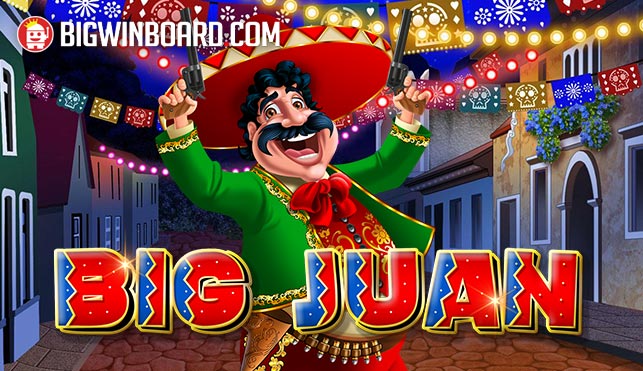