Please be advised – UK visitors are IP-blocked from accessing our demo games due to new regulatory laws. Sorry for the inconvenience.

Book of Ra - Temple of Gold is more than just a fresh coat of paint and, on the whole, a good addition to the Ra series.

If there is one slot series that needs little introduction it is the Book of Ra series. One of the most popular lines of games, both online and offline. A seemingly simple-looking slot has captured the hearts of countless players ever since it was released well over a decade ago. Releasing sequels to such a popular set of games is tricky because you want to introduce something new, yet you don’t want to tinker too much with a winning formula. Ra fans will most likely be relieved to see that Novomatic partners, Winfinity Games, have hit upon just the right combination of new and old features.

There are two obvious alterations. Gone is the Indiana Jones lookalike character, replaced with an Indiana Jane style female lead on this adventure. The second, we have left Egypt! The latest instalment moves from the dry Sahara to the sticky South American heat in search of the treasure hidden in the fabled city of El Dorado. Significant plot or character changes in any entertainment form runs the risk of alienating devoted fans. Hopefully, this isn’t the case here because the update has breathed some life into Book of Ra and anyway, at its core, it remains a faithful Book of Ra slot.

The look has that golden sheen that we have come to expect, and the reels sit on a suitably mysterious jungle looking background. The soundtrack provides bags of exoticism, and on the whole, the sensory impact is exceedingly pleasant. Novomatic or, Winfinity rather, have stuck with a pared down setup using 5 reels, 3 rows and 10 paylines that can be adjusted for play with either 1, 3, 8 or 10 paylines activated.

Players can select bet levels as low as 10 c/p and as high as £/€100 per spin. Symbols, excluding the card royals, borrow heavily from the theme. To explain their value, we will use the full 10 paylines at £/€1 per spin to keep it simple. The 10 – A symbols are worth from 0.5x for three, up to 15x the stake for five. In the middle of the pay range is three golden statues/treasures worth from 0.5x (for two) up to 200x the stake for five of a kind. The female adventurer is the most valuable base game symbol with 2 of a kind worth 1x the wager up to 500 times your stake for a five of a kind combination. Combine the solid symbol values with the games high volatility and you have the recipe for some real all or nothing slots action. And if that isn’t enough to get the adrenaline up, players have the option of hitting the gamble button after wins to really go all in.

As you may be aware of, Novomatic allow operators the opportunity to choose from a set of different RTP values, from as low as 88% up to 97%. Most commonly, operators will choose an RTP setting of 95%, but it's always a good idea to have a look for yourself in the help file of the game.

Once again, the book is the key to the extra features and plays several roles. It serves as both wild and scatter and is worth 2x, 20x, and 200x the stake for 3, 4, and 5 of a kind. The more scatters that land, the more extras come into play during the free spins as such:

When Free Spins are triggered, the applicable number of books will flick open and randomly choose one special symbol each. When these special symbols land during the bonus round, they expand to cover the whole reel. The payout frequency is also significantly helped because the expanded symbols do not need to land next to each other to create a winning combo. If you have followed the Book of Ra series, you have probably seen videos (or experienced) this feature leading to huge wins and is easily the most exciting and nail-biting part of the slot. Over time, free spins are expected to land every 170-210 games.

And that’s it. A short but sweet list, which is typical of the Ra series. On many other slots, you might feel short-changed with such a simple list, but it just works with Book of Ra – Temple of Gold. It always has with the Ra series which is concerned more with fast paced big wins rather than intricate details.

Novomatic are onto another winner with Book of Ra – Temple of Gold. The female hero takes players on a slot adventure that is every bit as exciting and colourful as previous versions, perhaps more so. The pace is outstanding, and the game rips through spins at breakneck speed. With a hit frequency of around 30% with 10 lines in play, there are plenty of thrills from smaller wins while waiting for those bigger ones to land. And big wins come courtesy of up to 5,000 times your stake and a top prize of €500,000 at the maximum bet level.

For fans concerned about the change in location and main character there really is nothing to worry about. A few spins in and you won’t even notice the difference. The action is classic Book of Ra combined with elements of Book of Ra Magic, and your attention will be consumed by the high volatility action on the reels rather than on some fringe graphics.

Like all good sequels, it has retained the heart and soul of previous releases while containing enough tweaks to make it a solid standalone title in its own right. Book of Ra – Temple of Gold will certainly appeal to fans of the series, no doubt about that. It also suits players looking for a no-nonsense high volatility slot where you can take it all, or, leave it all on the table. 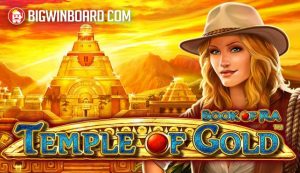 © Bigwinboard.com, 2020. Unauthorized use and/or duplication of this material without express and written permission from this site’s author and/or owner is strictly prohibited and may result in a Google DMCA (Digital Millennium Copyright Act) takedown and/or legal action.